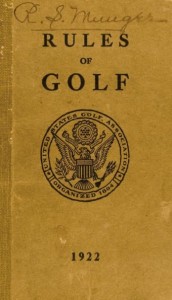 Baby/bathwater, forest/trees, cart/horse; choose whatever cliche you like as golf’s governing bodies again are making a mountain out of a mole hill and stepping over a dollar to pick up a dime. If the anchored putter is going away, I say simply: USGA, R&A it is way too late to worry about closing that barn door.

The Virginal White will tell you a broomhandle putt is not a stroke because the club is anchored to the body. That’s why, they claim, this is different than all the other genie-is-out-of-the-bottle crap that the R&A and USGA have willingly chosen to ignore for eons. A rock become a featherie become a guttie become a Haskell become balata become a ProV1 is evolutionary, not revolutionary, not erosive of the very foundation of the noble game. What rationalizing rot.

We are to believe a shaft is a shaft is a shaft, whether made of hickory or steel, graphite or bullshitium, tipped or spined, tweaked or flighted. Sheep give way to triplex mowers, pasture to heated and air-conditioned greens; the game’s virtue remains intact. Sarazen can glob gobs of metal on a club, turning a plow into an airplane wing yet you can’t stick the end of a putter in your gut or sternum?

And 500-yard par 4s that guys reach with wedge does?

Far Hills, we have a problem here, and it goes by the name “Reactionary Imbecility.”

Now I don’t use a long putter, so I don’t have that particular dog in this fight. In fact, I use a putter that is far shorter than the industry standard, what we will assume is the sanctified aesthetic high-water mark. Talk about a putting advantage. If you want to get a leg up on the opposition shag your ass down to the local golf shop and get properly fitted for a putter; I’ll all but guarantee you it will be shorter than so-called standard, the lie angle probably won’t be–here’s that arcane concept again– standard (which is what’s wrong with arbitrary standards in the first place). So forget the witch’s conveyance. I have gone from the worst putter in my decades-long playing group to the best, and it wasn’t because of Dave Pelz (though I will give a shout out to something logically simple that Dave Stockton said).

Oh gray-haired self-styled saviors of the game, thank you so for allowing  NASA-grade fitting diagnostics.

Golf isn’t a union shop. The only dues you are required to pay come in the form of sweat and toil. The only limitation on your employment is your ability to perform.  If you don’t glow in the dark like Lance Armstrong; if you freely admit to your playing partners that your ball moved when you accidentally stepped on it while back in the mesquite taking a leak and you replaced it with penalty stroke added–why should you not be able to use an implement that offers no statistically significant advantage over the alternative? I don’t care if your putter is long enough for the grip to have teeth marks and neither should the Weenies of the Rules. This one’s just a non-starter

Is it really because the self-anointed purists think it looks bad?  Please. Remember the salts of the game going after Casey Martin? The one’s clamoring how golf is an athletic endeavor of sweat, toil and fatigue while they drove around the Grumps Tour in the very same carts they felt Martin should be denied on the PGA Tour. Et tu, Arnie and Jack, err, Brute?