Books legal and otherwise are as busy as a tech rep on tourney Wednesday.  Baseball’s fired up, we just endured the most overwrought exercise in all of sportsdom–March Madness–the Derby is close, and for those who are geographically and calendricly challenged, the golf season is starting.  So like everyone out there with half a pulse, a keyboard and no real expertise whatsoever in such matters, it is time for me to spout rhapsodic as to who will win the Masters. 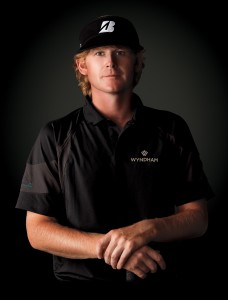 The heart (and mane) of a lion: Brandt Snedeker

I saw the line and got quite excited.   And while math ain’t my forte, I can pull it together just enough to know that one C-note multiplied by 100-1 equals one helluva payday, and in this business, helluva paydays don’t happen very often.  Our fair-haired big-grinned boy who almost had it, lost it, and then displayed the guts to really lose it on worldwide TV will be decked out in green come Sunday evening.

Since the post-millennium Tigerproofing of Augusta, the key to winning isn’t GIR or total driving or being able to seduce a 1.68 PPG rating out of the Cameron.  It’s heart.  And tears.  And smiles.  Forget a few robotic outliers.  Think mighty Angel (and his little friend the Fortuitous Tree Sprite).  He has it inside and it easily comes outside.  Phil?  Please.  All the pines in Georgia couldn’t produce enough Kleenex.

When Hootie sought to sort through who would be the most-deserving man standing, he shoulda lined the fairways with video monitors showing endless loops of “Old Yeller” and “Brian’s Song,” not rough-that-shall-not-be-called-rough rough.  Steely resolve?  That’s so you-know-who, so yesterday.  See who slobbers up best and fit him with something ugly and eminently cherished in, I’m just guessing here, 40L.

I’m going with the former rookie-of-the-year who doesn’t sweat the occasional foul ball and who leads with his ticker.

It’s all about heart.

I don’t want any of you asking for a loan on Monday.

2 Responses to “It’s Just as Mystifying, But Like Swallows to San Juan Cap, You Gotta Get Down With Your Horse at The Masters”