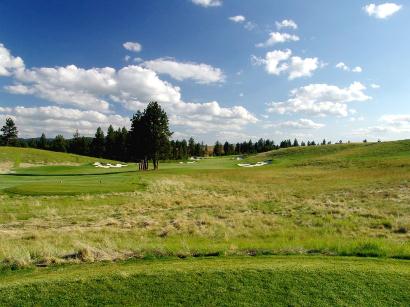 The Circling Raven Golf Club at the Coeur d’Alene Casino Resort in northwestern Idaho rightfully makes every list of the nation’s best casino courses, usually right near the top after the much more expensive super heavyweights, Shadow Creek and Fallen Oak. In fact Circling Raven makes the Top 100 Public Course lists of both GOLF Magazine and Golf Digest against all comers, casino or no.

I’ve had the pleasure of playing Circling Raven – and most of the other great casino layouts in the US – and pound for pound it does not get any better than this, a great course that is also a bargain. The only weakness facing visitors to this incredibly beautiful part of the country has been the associated casino hotel, which was strictly  middle of the road compared to its competitors, and did not suit the quality of the course.

So I am very glad to announce that the Coeur d’Alene Tribe has upped the ante and reinvested considerable portions of its casino earnings – $75 million to be exact – in the facility, upgrades that were completed a few months ago.
“When we announced we were going to undertake a expansion, many thought we were crazy,” said Coeur d’Alene Tribal Chairman Chief Allan. “The Tribe didn’t sit back and wait to be victimized by the economy. The Tribe took control of its own destiny. We moved forward with a vision, the results of which can now be found inside this beautiful resort.” 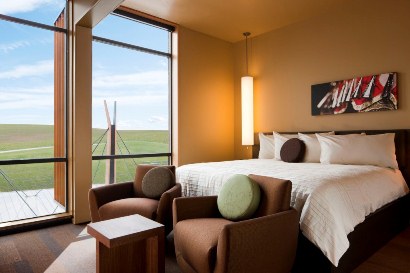 The new more luxurious guest rooms are a welcome addition!

This was the seventh but most important expansion completed at the resort since it opened in 1993. The improvements include the much-needed addition of nearly 100 upscale and oversized hotel rooms in two wings that overlook the golf course, with the latest technology and dramatic 10-foot floor-to-ceiling windows. Dining options were limited, so the hotel added a gourmet steakhouse called Ts’elusm, which means “stand before the fire,” where chefs grill the finest dry-aged prime beef over an open wood fire. Another new option is a sports bar and café, offering a vast selection of beers, wines and spirits and a pub-style menu. The final missing resort ingredient this expansion remedied is a new 15,000 square-foot, full-service spa. Substantial improvements were also made to the resort’s grounds and common areas.

The Coeur d’Alene area offers visiting golfers two other big appeals besides the excellent Circling Raven course and much improved casino resort. The town of Coeur d’Alene is charming and sits on an incredibly beautiful lake, and the weather is truly phenomenal, among the best in the nation from early spring to late fall, sunny almost every day with rain extremely rare, making it  a very reliable choice for a golf vacation. It’s also a very affordable choice, with stay-and-play packages start at $199 per night which includes a standard room and golf for two.

You can’t beat that, and if you get lucky, the blackjack table might even pay for your whole stay!