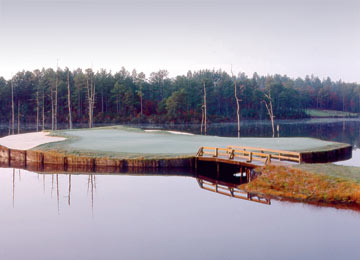 There has been a lot of buzz and hoopla about Pinehurst, the nation’s oldest and largest golf resort lately. As I reported the other day, the resort’s signature course, Number Two, just received its biggest facelift in 80 years and is better than ever, now easily one of the top public golf courses on earth.

But beyond the sound and fury of Number Two’s huge March reopening, another quieter and equally profound change was taking place at the even able resort, the “Home of Golf In America.”

Also in March, the resort stealthily acquired The Pit, a longtime favorite of locals and visitors, out of foreclosure. Opened in 1985, before courses built on former quarries were hot, this daily fee course designed by Den Maples was routed through a former sand quarry. It has three lakes, a Sawgrass-style island green, and though it’s been there for over a quarter of a century, was built at a then ominous 7000+ yards. Fun, value, and challenge have always been the Pit’s trademarks, earning it a near perfect 4 ½ stars from Golf Digest’s Places to Play.

So what will the resort do with The Pit? Execs I spoke with were cagey, but it was clear that the course may very well be rolled out as part f the main resort inventory, as Pinehurst Number Nine – or Ten. Years ago, when the economy and golf and Pinehurst were flying high, the resort moved ahead with a ninth course, designed and almost started (fairways were staked, equipment ready to roll) by Rees Jones on land owned by the Jones family. The land is still there, the contracts still in place, the blueprints and approvals still ready and in theory Pinehurst could move ahead and build Number Nine at any time, but these days it is a lot cheaper to buy a golf course than build one – and a lot faster too.

The folks at Pinehurst told me that they wont make any decisions until the Number Two work is done, but that practically is, and though there will be tweaks right up until the history-making 2014 dual Men’s and Women’s US Opens being held here, the course is officially reopened already. They told me that the greens at The Pit need to be rebuilt to bring it up to the resort’s quality, which will happen sooner rather than later, and my guess is that Pinehurst will have a ninth course by this time next year – if not sooner.