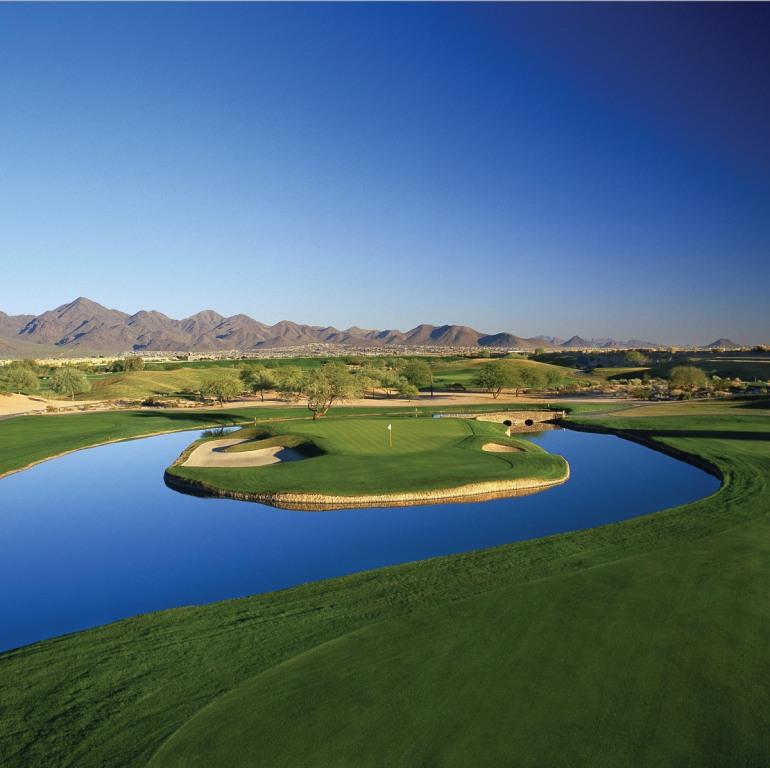 The 15th hole at the TPC Stadium Course in Scottsdale is a long par-4 with an island green, and just one of the many stunners here that challenge both the world's top PGA Tour pros and regular golfers like you and I.

The FBR Open has historically been the single most attended golf event in the world, with more people passing through the turnstiles from Wednesday to Sunday than at any other event, Major or Minor, on earth. Call it the Sixth Major if you will, it is one of the most important regular season tour stops, and typically gets all the big name players – even Tiger has won it, though he won’t be there this year, for personal reasons.

The event is held at the TPC Scottsdale, which is famous for its Stadium Hole, which takes the entire concept of the TPC Stadium course a step further and essentially puts a par-3 in the middle of a baseball stadium. Players enter through a tunnel, and it is the only completely enclosed hole in all of golf, with tens of thousands of fans screaming on this one hole alone.

I had the pleasure of playing in the pro-am here last year with US Champ Geoff Oglivy, and it was a hoot. The facility is totally first rate.

This year, the biggest change is the title sponsorship, and what has long been the FBR Open now has a much less sexy new name: the Waste Management Phoenix Open.

Perhaps to make up for this appalling name, the onsite hotel at the resort, the host property where most players stay, the Fairmont Scottsdale, is having a special package for regular golfers everywhere this spring. Its catchy name is the “That’s Impressive” Scottsdale Resort Golf Package, and I have to say, it is impressive. Here’s the nitty gritty:

You pay just $392 per person, double occupancy (at least that’s the starting rate). For that you get:

Two nights at this nice hotel, a round of golf on the Stadium Course where the tournament is held, and a round at the TPC’s second but also quite good layout, the Champions course.

That’s it. Two TPC rounds including one of the most desirable “in the footsteps of the Tour” courses, two nights at a luxury hotel, less than $400.

The deal is good for arrival Sunday-Tuesday until March 31. And these days, it’s a lot warmer than Florida!