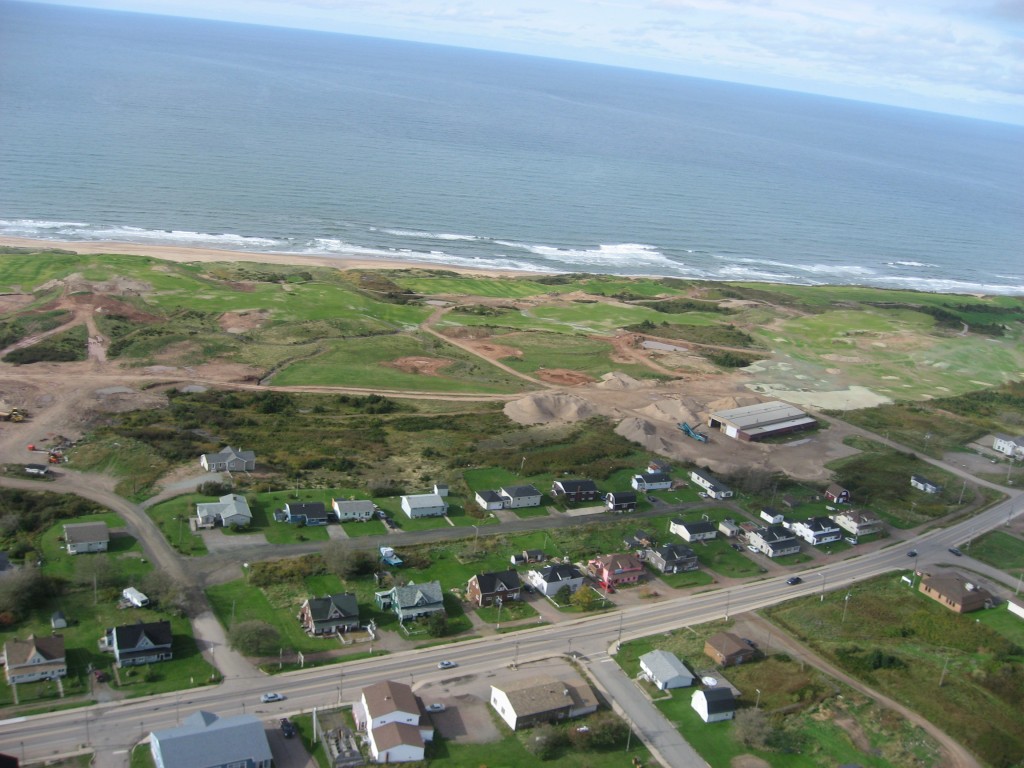 Cabot Links will lie between the town of Inverness and the Gulf of St. Lawrence. (photo by Laura Sherman)

Mike Keiser made a canny bet on a remote site on the Oregon coast, building a better mousetrap and letting the world beat a path to it. Will it work again on Cape Breton Island?

He’s certainly got the land to work with. Long in the planning stages from Ben Cowan-Dewar and Golf Club Atlas Development, Cabot Links sits on a gulfside tract on the west coast of the island, lower than Bandon but equally exposed to the winds.  The 195-acre property is a former mine site that was reclaimed and cleaned up by the province of Nova Scotia in 2003.

The course will be the first true links in Canada.  “The rolling nature of the land, with its subtle elevation changes and cant towards the sea, makes for a golf setting unlike anywhere else in Canada, and one of very few pure golf experiences in the world,” Cowan-Dewar said in 2005.  “These factors, along with the site’s proximity to the Cabot Trail, led us to name the property Cabot Links.” 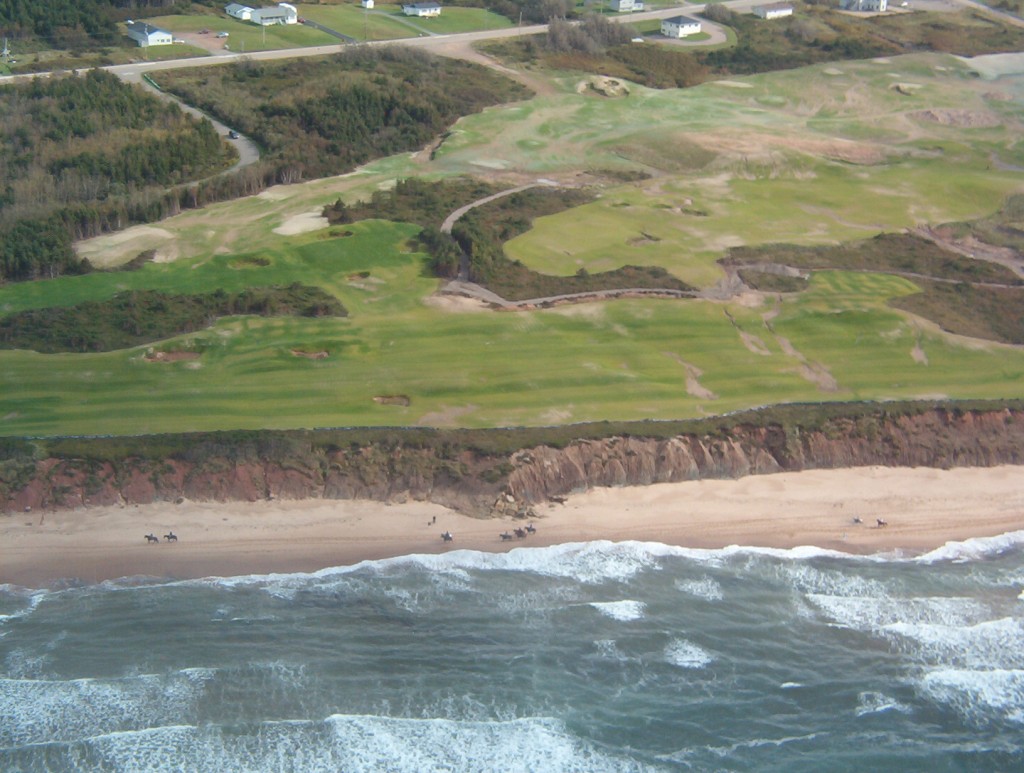 The property slopes down from the town to the seaside cliffs. (Photo by Jeff Neuman)

Rod Whitman, whose credits include three of the top 30 courses in Canada according to SCOREGolf’s 2010 rankings, is the architect responsible for the design, with input from Keiser, who makes monthly trips to the property.  Whitman has embraced the opportunity, and likens the intimate relation between the town of Inverness and the course’s land to that more commonly found in Scotland, in remote towns like Dornoch (close to a larger, better known Inverness) and in the university town of St. Andrews.

During a recent flyover, I saw the progress being made on the site, and instantly understood the enthusiasm.  The land has the tumbling character that makes links golf the varied and entertaining game it is.  The Gulf of St. Lawrence will be a threatening presence on the coastal holes, and a distinct part of the atmosphere on all the rest.  The environment is perfect for the native grasses that lend themselves to firm and fast conditions; according to the course’s website, the gulf waters reach temperatures of 70 degrees in summer, among the warmest ocean waters north of the Carolinas, contributing a moderating influence that is ideal for links turf. 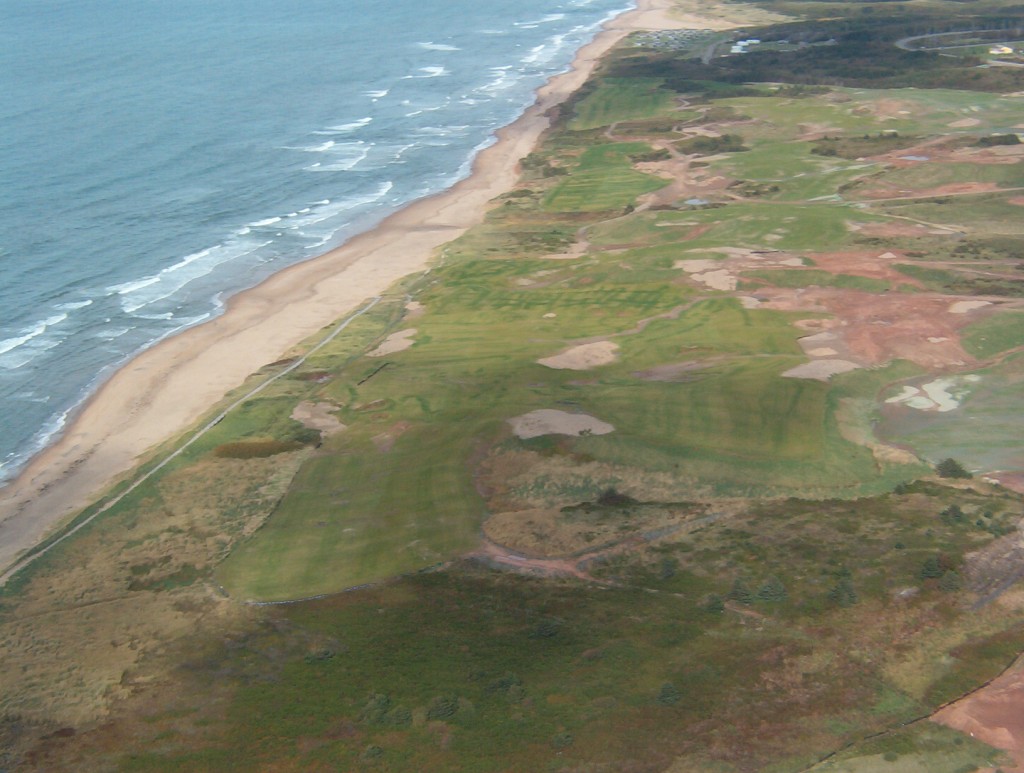 The links viewed from its southern end. (Photo by Jeff Neuman)

Ten holes will be open for preview play in 2011, with an official opening scheduled for 2012.  Will golfers flock to this obscure location, as they have to Bandon?  Halifax, Nova Scotia, is just a two-and-a-half hour flight from New York, though that leaves a four-hour drive up to Inverness.  The nearest airport is in Sydney, a bit more than a two-hour drive away, but flight connections through Toronto and/or Halifax bring the total travel time from airport to airport well over the six-hour mark.  It might well be quicker to go to Oregon anyway.

In addition to the discovery of the new, however, Cabot Links offers the beauties of Cape Breton Island itself as well.  Driving the Cabot Trail through Cape Breton Highlands National Park is an unforgettable experience, and all golfers should experience the unique pleasures of Stanley Thompson’s magnificent Highlands Links on the island’s east coast in Ingonish.  The provincial government of Nova Scotia has made a significant investment in restoring Highlands Links to conditioning worthy of the playful and challenging layout, and one can only hope the course will recover from this winter’s devastating floods.  No world golfer’s resume is complete without a round on Thompson’s mountain masterpiece, and the coming of Cabot Links to the region provides a pair of reasons to make the journey.