Let’s get it out of the way at the start: 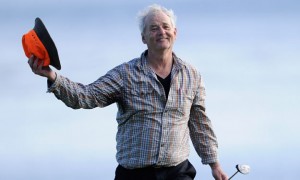 Bill Murray after winning the Pro-Am at Pebble Beach

And so it was, except for the greenskeeper and Masters champion parts.

D. A. Points, a thirty-four-year-old veteran of the Nationwide Tour with just nine top tens in his 127 previous PGA Tour events, won the AT&T Pebble Beach National Pro-Am on Sunday.  His first Tour victory came in large part thanks to an eagle 3 on the par-five 14th, when his outstanding – if not quite mirac –gap wedge from 107 yards hit the fringe, rolled, and went directly into the hole.

His pro-am partner, Bill Murray, joined Points in a celebratory chest bump so dreadful they should have been called for traveling.  It was a moment right out of the stoned imagination of a grubby greenskeeper smashing his way through a flowerbed with weed-wacker in hand.

Earlier in the day, at the Omega Dubai Desert Classic, long-hitting Spaniard Alvaro Quiros had a mirac of his own, the “three-quarter wedge” he said he hit at the 161-yard 11th that landed soft, released, and curled into the hole.  The eagle, his second of the round, helped him overcome a triple-bogey 7 on the 8th hole — earned when his tee shot landed in a bush and his recovery got stuck in a palm tree – and he held on for a one-shot victory.

While Lee Westwood, Sergio Garcia, Rory McIlroy, and Other Notables including Tiger Woods were fading on Sunday in Dubai, the team of Points and Murray was locking down the most unlikely win of the year.  It was the first time the two had played together, nineteen years after Murray first brought his peculiar talents to the former Crosby Clambake.

The old Pebble Beach pro-am was Bing Crosby’s gathering of his A-list friends with the PGA Tour’s best.  In the days before People and E!, the tournament provided a rare glimpse of movie and sports stars being themselves.  But as the years went by, the entertainment end became strained and the celebrity factor diminished considerably.  Bill Murray became virtually the only figure who could be counted on for on-course comedy, whether in the form of unfortunate headgear, cracks to the gallery, or dancing with a spectator through a sand trap.

“Everybody all week kept saying, well, you got the short end of the stick,” Points said after the tournament.  “I kept thinking, you know, why does everybody get so worked up thinking he’s this big distraction?… (H)e just seemed to have fun and he taught me to go ahead and have a little more fun, and in turn it distracted me from trying so hard.”

Points mentioned a moment in the final round when Murray’s presence proved a vital difference for him.  After his eagle on 14 and a birdie on 15 that followed a duck-hooked drive that nearly wound up out of bounds, Points was in unfamiliar territory, leading a PGA Tour event as he played the closing holes.

On the 16th green, facing a tricky four- or five-footer for par, Points heard his caddie ask him how he was doing.  “Not very good,” the leader replied honestly.  After marking his ball, Points looked over and saw Murray about to putt for par from the edge of the green.  Echoing Murray’s words on several occasions in the first three rounds, Points called out loudly, “You know, Bill, the crowd would really enjoy it if you would make this putt.”  The gallery laughed, and Murray hit a great forty-footer that nearly went in; pulling for his partner took Points away from his nervousness, and he calmly stroked his par putt into the cup.

When it was all over, and the team’s victory was assured along with the individual one, Murray joked about his contribution – “I knew the only chance D.A. had to win was if we could make it through the entire week without me asking him what the initials D.A. stood for, and I didn’t, and he’s the champion” – but he also turned thoughtful and reflective.

“When [he and Points] first met, I said, well, my goal when I play is I like to have the most fun and win,” Murray noted.  “And he said, ‘Those two things usually go together.’  And I thought, that’s about as solid an endorsement of where we’re going this week as I could have gotten…

“We sort of pulled away a little bit… and I thought, well, we have a lot of holes, I don’t even have to think about that.  But really I was just thinking about Knucklehead here [indicating Points]. I just thought, if I could not screw this up for him, that would be great.  And if I don’t screw it up – it’s sort of like the acting that I was taught, which was if you make the other person look good, you don’t have to worry about yourself.”

The win puts D. A. Points into the Masters for the first time.  He acknowledged he’s never played Augusta National, but his playing partner summed it up for him: “Really good food.  The course is okay.  But the food is unbelievable.”

Cinderella lived happily ever after.  The clock strikes midnight, but this story’s not over yet.