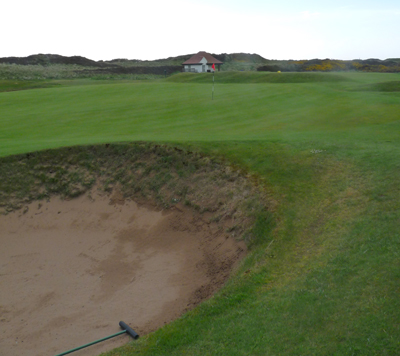 There aren’t very many golf clubs in the world where you have to be invited to become a member, there is a tradition at this long established club, that you arrive in a suit and tie and you depart in a suit and tie. Don’t get the wrong impression from that statement its far from being some snobby club and that tradition doesn’t extend to none members.

The members are most welcoming and I had the pleasure of playing with Craig and Graham who are both members at Western Gailes and a good couple of lads and very good golfers, Craig had back-to-back birdies at 9 & 10, just missed out on another at the 11th.

I would also recommend you use the caddies, apart from saving you anywhere between 5-10 strokes, they are good company and most of them accomplished golfers. Cliff who was caddying for me has been a caddie for some 25 years and knew the breaks on the green like the back of his hand or all the bars in Glasgow!

You play four holes out then you have a run of holes from the 5th to the 13th that all run along the side of the ocean, sometimes it’s hard standing on the tee to concentrate. I found the views not only awe inspiring, but also very calming. It was a strange sensation, but felt so right on this course. Yes I have to say I was playing well, but if I wasn’t, I could see myself being just as calm because of that rhythmic sound of the sea hitting the shore. It’s weird because I can feel it now as I am trying to describe it to you, but you will know what I mean when you get here.

The golf and course were fantastic, but for me the best part of the day was watching the sun starting to set over the Firth of Clyde. I had just finished playing 36-holes and the Gailes were calling me to go out again, my heart was leaping out, but my legs were saying no. But one day I will be back and I hope that day isn’t to far away.