In 1954 Dr Phillips sold his holdings to Granada Groves, a subsidiary of the Minute Maid Corporation, and retained only the raw land. Tom Barnes, a native of Minnesota, who had always wanted to build a championship golf course, took an option out on the land with his partner, Tom Dore, a Michigan businessman who surveyed the land and saw an immediate vision of what this land could become.

They broke ground on the golf course in 1960 and christened the area “Bay Hill” The original golf course architect was Dick Wilson, Bay Hill was the first golf course planted with Tifway (Tifton 419) Bermuda grass. Wildlife still inhabited the land including a family of bobcats that resided around the 17th green. In 1965, Walt Disney announced the purchase of over 27,000 acres of land nearby, where the Walt Disney World Resort would soon emerge.

The same year, Arnold Palmer played in and won a charity exhibition tournament at Bay Hill, Arnold fell in love with the course and the area, so much so he wanted to own it. In the summer of 2009 Arnold decided to redesign the course with his design company. He redesigned all 18 greens, reworked of all the bunkering and made major changes to four holes. The yardage went up from 7,103 to 7,196.

Tiger Woods 13/2 has won this event eight times since 2000 which means there has only been six other winners of this event during that time which is a phenomenal record, and to add some spice Tiger will again be going for three in a row. It really is all about Tiger this week and I am sure the bookies will be making him favourite and it’s also hard for me to just ignore that fact.

I am going to stick with Justin Rose 14/1 this week he showed some great signs last week coming back from injury and with two Top 5 finishes here in the last three years, including a runners-up to Tiger last year, I feel the Englishmen could just go one better this week. I know Justin will not have been happy with his final round 74 but he still managed a Top 10 finish and knocked some cobwebs off along the way.

One person who will want to be in the thick of it this week as he builds up to his Masters defence is Adam Scott 14/1. Adam has only played four tournaments this year and made the Top 25 in all four, with two of those Top 10 finishes. I think once again the laid back Australian will be in the thick of it again come Sunday.

Jamie Donaldson 66/1 will be looking to capitalise on his runners-up finish at the WGC Cadillac Championship and with leading the Race To Dubai on the European Tour these are good times for the Welshman. Jamie has always been a great golfer, but he will be the first to admit he needed to get him temperament right. This is a big year for the lad from Pontypridd as he looks to cement his Ryder Cup credentials, what better way that to pick up his first PGA Tour title. 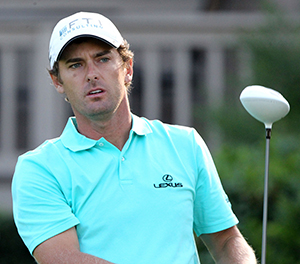 A player that appears to be coming back into form is Charles Howell lll 66/1 his final round 68 at the Valspar Championship saw him move up the leaderboard thirty-five places and for someone who has had three Top 25 finishes here since 2009 I think he may challenge here this weekend. Charles currently sits in 21st place on the FedEx Cup ranking and 5th on the scoring averages and has five Top 10 finishes so far this season.

I did tip Sang Moon Bae 100/1 at the Hyundai Tournament of Champions and have this nagging feeling he is going to win soon, and although he did make the Top 25 at that event it was a limited field tournament. But Sang Moon has gone on to have two Top 15 finishes in his last two events and I think we will see him challenging again here this week.

With Tiger Woods withdrawing from the event I am going to throw the 2012 runner-up into the mix – Graeme McDowell 16/1. Graeme has had three WGC Top 10 finishes on the bounce, and from his five starts this season has only been outside the Top 10 once, which is a pretty impressive record leading up to the Masters. A record I am sure he will want to keep in tack, and if not improve on with a victory here this week