The Gecko Pro Tour arrived at the Marbella Golf & Country Club but this stunning set up was under pressure after a two day deluge. The green staff worked tirelessly and produced a course in fantastic condition which was a credit to them and all their hard work.

Designed by the legendary Robert Trent Jones Senior in the late 80’s, the Marbella Golf & Country Club occupies one of the largest remaining green areas on the Costa del Sol. It has been imaginatively designed to respect the natural terrain and make the most of the spectacular Mediterranean backdrop.

The field was made up of many different nationalities from around Europe, including a number of European Tour players, one of which was Carlos Rodiles who was making his Gecko Pro Tour debut.  There were also a number of young up and coming British players in the field, who have arrived to play the tour over the winter months.

With the sun up and a gentle breeze scoring wasn’t as good as expected, but the young Englishmen Simon Boyd was quickest to make his mark and posted a first round 69. By the end of play on the first day that score proved to be good enough to give him a one shot lead over James Watts and James Scade and a three shot lead over Adam Sagar and Barry Walsh both shooting level par 72s.

The players were greeted with similar weather conditions on day two. European Tour player Carlos Rodiles had made tough going of his first round shooting a one over par 73, but he was to make up for that with his final round. He didn’t play spectacular golf but was solid through his first 15 holes but finished with three birdies for a four under par 68 to be leader in the clubhouse on  -3 a total of 141 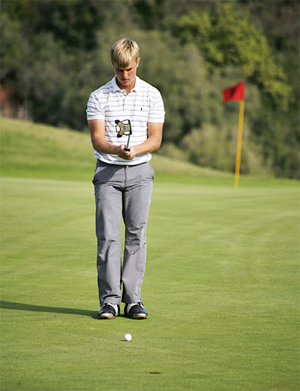 With boards showing a new leader, the rest needed to up their games. Standing on the par 5 17th tee both Scade and Boyd knew this was a great opportunity to catch Rodiles. But it was Scade who was the only player to take advantage and made birdie to move level with Rodiles.

Scade played the 18th perfectly, a drive and a wedge to eight foot saw him calmly roll in the putt to take his first professional title, the first of many no doubt.