Oliver Dunn played in the U. S. Open local qualifier at Wilshire CC, in Los Angeles, finishing as one of the two alternates.   This was his fifth attempt to qualify for the Open; since turning pro in 2006, he has competed mostly on the Golden State Tour, a satellite Tour whose notable grads include Nick Watney and Brendan Steele.   At the age of 35, Ollie is a veteran of GST; he lives in Santa Monica with his wife, Currie, and their son.

This year, money is tight and he’s had to cut back on the number of events he intends to play.   Some weeks, he has caddied for his buddies, but he is still working hard on his game, still trying to improve and to take the next steps.   Recently, he’s been working on the short game and the mental game with Neale Smith, a teacher whose students include Hunter Mahan and Jason Day.

I’ve known Ollie since he was a kid – his dad is a regular golf partner — and seen his game develop.  He had a lot of ground to make up.  In college at Northwestern, he played baseball, not golf, and he didn’t play any serious competitive golf until after he graduated.  But he had plenty of physical skills – the great hand-eye co-ordination and the sense of timing – as well as the discipline, patience, and determination that come from competing in any sport at a high level.   Watching from a distance as he tries to break through has been a lesson in the unforgiving nature of the game at the professional level, and the exceeding fine line between success and failure.  Right now, in a practice round, Ollie would be a match for a Tour player; for him the hurdles to clear are mostly mental.

He talked candidly about his experience in the qualifier. 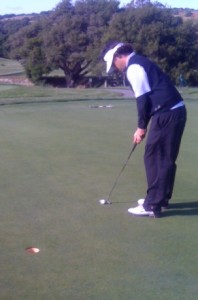 Usually I’ve gone in thinking it’s a long shot – how many people make it to the Open through the qualifiers?  Not many.  But this year, since my playing has been limited, I had a little different attitude.  I played a practice round at Wilshire with a couple of my buddies, and we talked about strategy.  Wilshire is an old school course, not very long, fairly tight, but with lightning fast greens – treacherous greens.  And they renovated the course recently, putting in a lot of fairway bunkers, tiny bunkers but you don’t want to be in them. I practiced by hitting a lot of 3-woods and hybrids, and I practiced putting on the fastest greens I could find.  The day before the qualifier I went to a short 9 hole course where all my approach shots were wedges.

It paid off in the qualifier. I hit 12 of 14 fairways, and I was one over through seven holes.  Then I had a good stretch and I got to 3 under through 14.   I birdied 8, 9, 11, and 14, and I was feeling the mojo.  The pins were right on the edges, but I was feeling super-aggressive, and putting the ball right under the hole.  I was hitting the ball great, and every shot was a green light shot.

After the 14th, everything changed.  You try not to think of what everybody else is doing, but in the back of my mind I knew I had to have a pretty good shot.   I’d started out with the mindset that I had to go low, but now I was right in the middle of it and I started playing a cat-and-mouse game with myself.  How aggressive did I want to be vs. how much did I want to protect my score?  Up to that point I played a lot of committed shots, not just full shots but putts, too.

The game plan changed a little.  I tried to stay committed, but I started playing for the middle of the green.  I made my pars at 15 and 16, and then at 17, I had a par putt straight uphill, about ten feet, and I thought I hit it perfect.   When the ball was about a foot from the hole, the guys I was playing with said, Way to go, because it looked like it was in.  I thought it was in, but the ball did a 360 and stayed out. 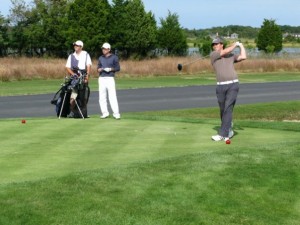 Now I’ve got the hardest hole on the course coming up and I was angry.  Not shouting angry, but good angry. I stepped up and smashed a driver right down the middle and made my par, but I posted a 69, two under.  There was already a 67 and a guy in the group behind me had a 68.  I was third with about half the field on the course.  I figured I’d end up in a playoff.   They were taking 6 guys for the sectional.

The waiting was hardest part.  You’d rather just keep playing.  I had a sandwich and chipped and putted a little, but I didn’t hit any full shots.  I knew about 10 others guys in the field, and they kept telling me not to worry, I’d make it, but I kept checking the board.   It turned out the way I thought.   I ended up tied 4th with four other guys, so we had a 5-for-3 playoff, five guys for three spots.

There were four college guys and me.  A lot of the players at the qualifier were college guys from UCLA or USC – college golf is where it’s at.  They play the best courses in L. A.  They play Riviera and Bel Air, and it turns out that Wilshire was a regular practice course for them, too.   It was practically their home course.

We all parred the 17th, but honestly, I knew I wasn’t as sharp as I had been.  I wasn’t thinking as clearly.  I had a putt there to secure a spot, but I’d been waiting and waiting and waiting for the others.  Then when it was my turn, I wasn’t ready.    I was the last one to putt and a birdie would have put me in, but the putt I hit was a completely different animal from the putts I hit in the middle of the round.  It didn’t have that tight roll, and it never had a chance.

The same thing happened on 18.  I chipped up closer than they did, and had about a 6-footer for par.  Then I stood around waiting again, and I didn’t feel right when my turn finally came.  There were already three bogeys, so a par would have done it.  The putt was like the one I’d missed on the last hole, inside right, and I never felt a hundred per cent committed.

Then we went to No. 10.  There were four of us left, playing for two spots, and everybody parred.  It seemed like everybody was in the same frame of mind, careful and tentative –I think it would have different if we’d been playing for one spot, but everybody seemed to be waiting for someone to make a mistake, not trying to win it.

The next playoff hole was the 11th, and one guy fanned it off the tee.  The ball was going right and it looked like it was heading OB, but it hit an officials’ cart and stayed in.   We didn’t have many spectators, but there were officials all over the place.  Each of us had an official, and there were four spotters with us, plus a big group of officials up at the clubhouse.

I had a wedge in but dumped it into a bunker, then saved par when I hit the sand shot to a foot.  Then we go back to the 18th, still four of us.   The hole is a soft dogleg right, and I pulled my drive a little and hit it through the fairway.  I got a terrible lie – by far the worst lie I’d had all day.  I had 185 out, creek on the left side, but the others were in the fairway and I figured I had to go for it.  I had to try to get there.

I hit it into the creek and that was all she wrote.  Two guys parred the hole, and that was the playoff.  I’m an alternate, but I don’t hold out a lot of hope that I’m going to make it to the sectional.   It’s tough to miss medaling by two shots and then to lose the playoff, I’m not going to get upset.  Really, the only one who knows exactly how anyone plays is the player himself, and I had a good round.

What I mean is that any time you’re in a pressure situation, you’re the only one knows how you feel when you hit a shot.   You’re the only one who knows whether you were thinking clearly, whether you knew exactly what you wanted to do, whether you committed to it.   I did that for a lot of the round – but not at the end.  It got pretty chaotic in my head.   I felt as though I was in a battle out there and didn’t really have time to think.

From an experience standpoint, all this is great.   This is something I’ll talk about with Neale.  I know I need a way to handle the kind of pressure that I was feeling.  How do I keep going when I get to three under?   How do I keep concentrating, how do I stay sharp, when I get in a playoff situation like that?   In one way, the answer is easy – I have to stop and think.   But in the midst of the situation, it’s not so easy.  How do I do it in the moment?