If the short course that Bill Coore and Ben Crenshaw are building at Bandon Dunes doesn’t create a sensation, I’ll eat my hat.  And my putter. 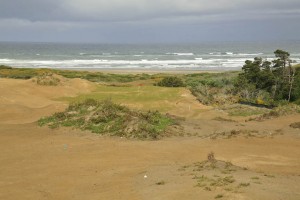 No. 9 on the The Preserve Photo by Wood Sabold

Last week I got to walk the 13 hole course, called The Preserve.  The construction is still in progress, and the grassing has only just begun; the course won’t open until next spring.  Nevertheless, the effect is stunning.  From the 18th hole of the Bandon Dunes course, the shapes of the course are visible, rising up the slope like a golfing version of a terraced Mediterranean landscape.   Instead of olive trees and vineyards, The Preserve is dotted with the dark green of shore pines and gorse, and fringed with tawny beach grass.  The dunes are more rugged than anything in Tuscany, but still one sees how the hand of man has respectfully shaped the land for pleasure and beauty.

Once on The Preserve itself, the perspective changes, and the panorama is even more dynamic.  The first holes move toward the Pacific Ocean from the Bandon Trails clubhouse, and horizon soon comes into view — and pretty much stays there during the heart of the round.   There are higher points at Bandon Dunes resort, but The Preserve offers a lordly, top-of-the-world feeling.  Holes No. 4 through No. 11 aren’t all visible at once, but they feel connected in an integral way.   With tees and fairways providing plateaus in a landscape that positively surges with motion, and the great sweep of the Pacific as a backdrop, this is highly-charged, rush-of-adrenalin, dream-like golfing terrain.

Since taking that walk, I’ve talked to Mike Keiser and Bill Coore  about The Preserve, and offer herewith some of their thoughts — and mine — about this addition to Bandon Dunes.

1.  The origin.  Mike Keiser can’t remember exactly how long he’s been thinking about building a par-3 course at Bandon Dunes, or whether Coore Crenshaw first suggested it when they were routing Bandon Trails.   The 22-acre parcel contained land that they all recognized as ideal for golf, but there just wasn’t enough land to make it feasible for a full-sized course.  “Bill and Ben said they could figure out how to get some holes out toward the ocean,” Keiser said, “but they couldn’t figure out how to get back.”

2.  Boomers speak.  Keiser pays close attention to the golfers who come to Bandon, and he kept hearing from many of them — the Boomers — that 36 holes a day was just too much.  When he asked them how they’d feel about a short course, they said, Hurry up and build it.

3.  The fifth course.   Though it is a short course, Keiser thinks that The Preserve will provide a different kind of experience, not a lesser experience than that offered by the four 18-hole courses.   “At first I thought that people would play here in the afternoon,” he said, “after playing a full round.  But now that it has taken shape, I’m not so sure.  I expect some people to choose this as their first course.  It will be a great opener, and it will get them used to playing the kinds of short shots they’re going to encounter on any of the other courses.” 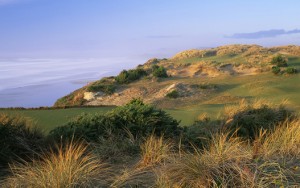 4.  Memorable holes.   In Keiser’s view, par 3’s are the most memorable holes on a course, they ones that establish its identity in the mind of a golfer (“How many memorable par 5’s are there?” he asked me.  “I can think of one — 18 at Pebble Beach — that’s really memorable, and that’s about it.”)   At The Preserve, he thinks that six or seven holes could be memorable, and the 9th hole, he predicts, will be the most memorable hole at the resort, eclipsing even the 11th at Pacific Dunes.  The 9th hole plays downhill, right at the Pacific, and the golfer will have the lofty sense of launching his tee shot out toward the infinite.

5.  The Coore-Crenshaw sweet spot.  “When Mike asked us to do this, I was thrilled,” Bill Coore said.  “Par 3’s are the holes we like the most to design.  To get to build 13 of them — that’s just a pure treat.”   He didn’t feel that he had to aim for variety since the site itself was so varied; rather, he just had to “take what Mother Nature offered.”

6.  The par 3 hole as a composition.  For architects like Coore and Crenshaw, who have as strong an aesthetic sense as anyone in the business, the preference for par 3’s makes perfect sense.   They strive toward a kind of naturalism in which a golf hole seems to belong to, and blend in with, the existing landscape.   In a way that is evident to anyone who played their courses, they seek to create images — not necessarily golf images, but scenes and perspectives.   On a long hole, the scene and perspective might change as the player moves from tee to green, but a par 3 can be apprehended at once, forming a single, unified impression.  It can be a composition.

7.  Pure discovery.  The concept of The Preserve was simple — to go out and find the best holes.   “Mike didn’t care about the number of holes,” Coore said, “though I don’t think he wanted it to be nine.”   They knew that there wasn’t enough property for 18 holes, and they came up with a routing that called for 12 — until they cleared some gorse and found another hole, No. 6, down at the bottom of the hill.  13 holes?  Why not?  The unusual number might help people approach it in a spirit of adventure, not with the idea of shooting a score.

8.  Speaking of numbers.  Mike has always regarded the courses at Bandon Dunes as “throwback” courses, but with the The Preserve he has gone all the way back.  The earliest course in Scotland didn’t have a fixed number of holes; the Leith Links has only 5 holes when the first recorded golf competition was played in 1744, and St. Andrews at the time had only 12 holes.  Prestwick, where the first Open Championships were held, started out with 12 holes, and Musselburgh had only 7.

9.  Length.   The longest hole on the short course will be about 170 yards — though, as Coore quickly points out, it could easily play as 200 yards in certain wind conditions.   There was no feeling of necessity about including a longer hole for length’s sake.  For a while, Coore-Crenshaw toyed with a hole that measured 200 yards, but in the end it was scratched.   “It just wasn’t very good,” Coore said.  Noting the lack of forced carries, and teeing grounds that often reach to within fifty yards of the green, Mike Keiser said, “This is a course that any golfer should be able to play.”

10.  Challenge.  Any golfer might be able to play The Preserve, but that doesn’t mean that it will be easy.   As Coore said in an interview, “With a short course, you’re eliminating the longest and most unpredictable shots. It frees you up creatively, and lets you put in something that might be right on the edge of unfair, something you wouldn’t put into a big course…because a big score on one hole might affect how a golfer thinks about his whole round and the course. But most people play short courses for fun, or at match play, and that allows you to create something the golfer might never be able to experience elsewhere.”

11.  A trend?   In an article in the Wall Street Journal, writer Jeff Neuman speculated — hopefully — that a revival of interest in short courses might help to reverse the declining participation rates in golf.  The reasons given for the decline (cost, the length of time it takes to play a round, the difficulty) are all mitigated by a short course.  In recent decades, however, the short course has fallen out of favor — and many that have been built are pitch-and-putts, or “practice” courses that loop around a driving range, or adjuncts at ultra exclusive clubs.  There hasn’t been a single model for what a short course might be, a model that inspires other owners or architects.   But Mike Keiser has already started to hear comments from people who think that The Preserve is precisely such model, and who knows?  I’ll join the speculation and hope that we’ll soon see many short courses, with an odd number of holes, and that they bring a fresh wind into the game.

12.   The Circus.   Before there was a Bandon Dunes resort, the property was a favorite haunt of dirt bikers and guys with ATV’s.  They especially liked the area around the preserve, where they could rip and down the dunes on their vehicles.  The place was famous enough locally to earn a nickname, The Circus.  As a golf course, the place will continue to provide thrills — but they will be a lot less noisy, and a lot more eco-friendly. 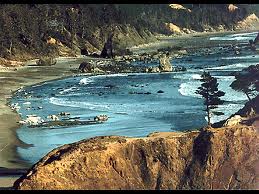 13.  The South Coast.   Mike Keiser has been active in promoting the South Coast Conservation effort.  From Bandon south to the town of Brookings, a distance of about 100 miles, the Oregon’s South Coast is a scenic wonderland; the area is latticed with wild rivers, and the ocean is planted with the stark, dramatic seastacks.  All the profits of the short course will be dedicated, says Keiser, to advancing the effort to “protect and preserve this beautiful, pristine coast.”   There aren’t many places where you can pay a green fee and feel that you are doing a good thing, but that’s exactly what you will be doing when you tee it up at The Preserve.