I witnessed an amazing display of commercial skywriting over Medinah’s blue skies early this morning. Four planes coordinated and puffed out this message: Go Euro@paddypower. Check out this reference to Paddy Power, a British betting house, at this Ryder Cup preview story: http://tourontap.com/ryder-cup-2012/handicapping-the-ryder-cup/

Caught some incredible action out at the par-four 12th hole this morning. Watched Ian Poulter redeem himself after a terrible second shot from the middle of the fairway by holing a clutch and winning par putt. Then witnessed Phil Mickelson’s remarkable third shot to within gimme par distance thereby setting up a match-clinching 7&6 outcome on this 476-yard uphill hole. The cheers and roars from the gallery for Mickelson and partner Keegan Bradley were deafening. 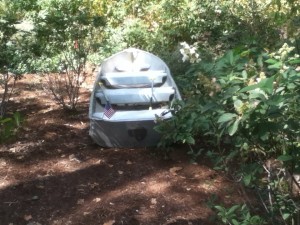 A boat tucked away in the landscaping near the 13th hole

Chatted briefly with some “friends” of Nicolas Colsaerts, three of whom were sporting Belgium flags and following their long-hitting country man. “People think we’re waving the German flag, but it’s Belgium,” said one individual. On one of their flags was written: “Belgium, Baby.” Such little encounters really make the Ryder Cup such a special event.

Many lucky patrons are using the nifty and American Express-sponsored FanVision, a nifty, compact hand-held video player providing live television feeds of the action. It not only delivers the main live feed of the NBC-TV coverage but also separate feeds of three other holes plus stats. Fans are also using the official Ryder Cup radio (with separate XM and BBC feeds) with earphones to keep abreast of the action.

On the way back to the Media Center, I walked by the par-three 13th hole which sits next to Lake Kadijah. Then I spotted a boat (probably placed there for rescue purposes) nestled in the shrubbery. Heard a fan say about it: “It’s for the European team because if they don’t play better and they’re up the Lake without a paddle.”

After pulling his drive on 18 into the woods yesterday in his losing morning foursomes and paired with Jim Furyk, Brandt Snedeker said in his press conference: “I just hit an awful shot and put Jim in a terrible position…Under pressure I get quick and stuff happens in my swing that I don’t want to happen.”

Fast forward to this morning’s foursomes and here’s Snedeker again on the 18th tee, 1 up with partner Furyk against McDowell and McIlroy. This time Snedeker misses the fairway but not dead left in the woods, finding a forgivable right side fairway bunker and with a good lie. From there, Furyk knocked it onto the green which proved the pivotal shot for the Americans to win their point. Afterwards, Snedeker said about gaining his first victory: “It’s a huge monkey off my back. It was obviously a tough way to end yesterday…”

The continuing matter of Rory McIlroy being labeled a “marked man” at this Ryder Cup has been taken to absurd lengths by certain members of the British press. One of them pressed Furyk today if he was the one that started it all. Furyk said in reply: “What I said was that in the FedEx Cup, he (Rory) was a marked man because he was the best player in the world and he was no. 1 in the FedEx points. Then we started talking about the Ryder Cup in that interview and the headlines the next day were that I said he was a marked man…I’m not the one to incite the other team or give them any bulletin board material…”

Furyk should have echoed what Phil Mickelson said on Wednesday to a similar line of questioning by a British tabloid writer, “Nice try.”