At one of the game’s biggest pressure cookers, Grand Rapids’ Matt Harmon and Traverse City’s Randy Hutchinson survived the second stage of the PGA Tour’s Q-School and advanced to the finals on Nov. 28-Dec. 3 at PGA West in Palm Springs, CA.

In spite of securing his PGA Tour card for 2013 via his yearly earnings (20th spot) on the Web.com Tour, Jackson’s Brian Stuard also will be competing in the Finals for the prize money and the chance to improve his standing for added events next year. (Note: Michigan’s Justin Hicks and Doug LaBelle II also earned their cards next year but are not competing in the finals.) Harmon, Hutchinson and Stuard will be part of the 156-player field competing at stroke play over 108 holes (6 rounds.) Another upside to Harmon and Hutchinson making it to the Q-finals, they’re assured of a home on the Web.com next year. 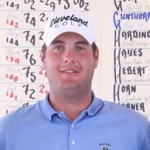 Coincidentally, I ran into former Michigan Amateur champion Andy Matthews at the U-M football game this past Saturday in Ann Arbor. Electing not to compete in the Q-School, Matthews is focusing instead on a strength and conditioning program at U-M as well as the new 2013 Canadian Tour which will become a gateway into the Web.com Tour.

Acquired by the PGA Tour only last month, the Canadian Tour will have at least eight tournaments next year, each with prize money of about $150,000. Web.com Tour cards will be awarded to the top five players on what now will be called PGA Tour Canada, with the next five players given exemptions into the final stage of qualifying school for the Web.com Tour. A Grand Rapids native, Matthews is a former winner on the Canadian Tour at the 2010 Mexican PGA championship.

Images courtesy of the PGA Tour and the Michigan PGA