One hundred and seven years ago a Detroiter named A.W. Hicks became the first tourist to visit St. Petersburg, FL, by automobile. The trip took Hicks 14 days. Nowadays, most Michiganders can make it comfortably in two days and many do it in one. My wife and I opted for the leisurely route with a stopover for a few nights in Nashville, TN. But before bedding down in scenic and still tourist friendly St. Pete, we took in a Detroit Tigers spring training game against the Philadelphia Phillies in nearby Clearwater. 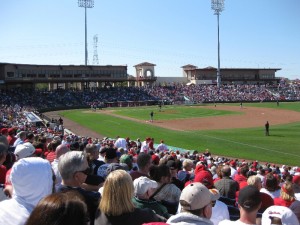 A lifelong baseball fan, this was my first spring training game and it was worth the wait. The game was played at the Phillies’ home field, Bright House Field. Home to the Phillies since 2004, Bright House Field (named for the area’s dominant cable TV company) is a state-of-the-art venue that raised the bar for spring training ballparks in Florida. Now seen as an important cog in the tourist industry, cities in Arizona and Florida are in a competitive race to maintain their spring training connections with Major League teams. In the past decade, the sprawling suburbs of Phoenix built expensive new ballparks to attract teams, several of them with deep Florida roots.

Borrowing some of the design features seen in many new Arizona ballparks, Bright House Field offers a 360-degree main concourse open to the playing field. It boasts 7300 fixed seats with grass berm seating for an additional 1,500. I went on-line and bought two seats down the third base line which turned out to be a hotbed of Tiger fans. It was also nice to have the sun at our back since at game time the temperature hit 83 degrees—not that I was complaining.

The Tigers didn’t disappoint their snowbird fans as they routed the Phillies 10-1. To top it off, Triple Crown batting titleist Miguel Cabrera hit a monster home run that literally flew out of the ballpark and went viral when seen later on video. When making a stroll around the stadium a worker told me it was the longest home run he’s ever seen at the field.

But really, the score is a secondary consideration when it comes to a spring training game. It’s more about taking in the atmosphere, the ambience and especially the warmth of the Florida sunshine. And yes, exchanging some baseball talk about prospects and veterans too. I liked how one Tiger fan asked his friend what he thought of young outfielder Nick Castellanos who was coming up to bat. “Hey, he’s got potential and remember he was a first round draft pick by the Tigers,” the friend replied. Moments later, Castellanos was rounding the bases after a well-struck home run.

A neat feature of the ballpark is a tiki-hut pavilion in left field, a sun-bathed seating and table area ideal for soaking in the game and suds. The food fare is also eclectic with a variety of traditional and healthy menu items including gluten free selections. And over at the Beers of the World concession 75 different bottled beers and seven tap beers are offered. As noted, you can walk around the ballpark via the concourse and once in the outfield can even peer down in the bullpen, carved out of the berm, and watch the relievers warm up. All in all, Bright House Field is an ideal venue to watch baseball. 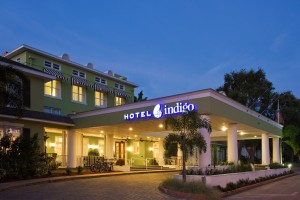 After the game, we had a 20-minute drive to our hotel in downtown St. Petersburg, the Hotel Indigo. We discovered this brand several years ago when we traveled to San Diego and we haven’t been disappointed since. Part of the IHG group (which includes Crowne Plaza and Holiday Inn), Hotel Indigo is a fast-rising, smartly designed boutique hotel that offers the services and attention of a much larger one. Our room was clean and spacious and nicely appointed. Plus the hotel provided free and adjoining parking, always a welcome sight after a long day on the road.

Moreover, the hotel (as its custom) was centrally located, conveniently within walking distance to restaurants, galleries, attractions and entertainment. When it comes to selecting a hotel like the Hotel Indigo, it’s often best to remember the real estate mantra: location, location and location.

In our brief two-night stay, we were able to explore downtown St.Pete’s without the use of our car. We took in the must-see Dali Museum (that’s artist Salvador Dali), the fine Museum of Fine Arts, a wonderful waterfront area with a host of outdoor dining options and the historic Renaissance Vinoy Resort that put St. Pete’s on the tourist map almost 100 years ago. (Incidentally, the Philadelphia A’s led by manager Connie Mack made St. Pete’s its spring training site in 1915.)

Needing a diversion on a rainy day, the Dali Museum was a delight. The three-story building, opened only two years ago, is an art exhibit in itself, lending modern design attributes of a geodesic glass bubble and a helical staircase—both in homage to the Spanish surrealist. Inside there is the largest collection of Dali’s works anywhere, featuring 96 oil paintings, including a number of large masterworks by the artist. Tip: take a docent tour to best appreciate the genius of Dali and the stories behind his creations.

Okay, but what about the golf? For affordability, it would be hard to beat nearby Mangrove Bay, an 18-hole municipal layout that offers good golf at a good price. A par-72, Mangrove Bay boasts a clubhouse and pro shop, lighted driving range, and is nicely maintained. It has earned “three stars” by Golf Digest’s “Best Places to Play” guidebook while also being ranked as one of the “Top 100 Most Women Friendly Golf Courses.”

For those with modest golf expectations, check out the par-three courses at Twin Brooks (18) and Cypress Links (9.) And golfers looking for upscale resort options may select from the Renaissance Vinoy right in St.Pete’s while farther afield there’s Innisbrook, the Ritz-Carlton and Longboat Key.