Michigan is awash in professional golf at an elite Tour level. Unlike in previous decades when the PGA Tour and Champions Tour used to make regular stops in Grand Blanc, Dearborn and Grand Rapids, now the LPGA has established a beachhead in the Wolverine State. Along with the Meijer LPGA Classic at Blythefield in mid-July, there are three Symetra tournaments here in 2015: The Firekeepers Casino Classic in Battle Creek held June 5-7; the Island Resort Championship to be held June 26-28; and the inaugural Tullymore Classic, July 3-5.

Leading the Symetra Tour is someone who’s very familiar with Michigan. He’s Mike Nichols, Symetra’s Chief Business Officer, and the former Executive Director of the Champions Tour’s Farmers Charity Classic in Grand Rapids from 1998-2002. In that role, Nichols provided outstanding leadership for the tournament and made many friends and allies in the community. He later became the Championship Director for the 2005 U.S. Senior Open in Dayton, Ohio. Nichols then joined the LPGA in 2006 when he served as Vice President of Tournament Affairs. He lives in Ormond Beach, Florida with his wife, Mary Beth, and their two children.

Nichols was interviewed by Terry Moore. 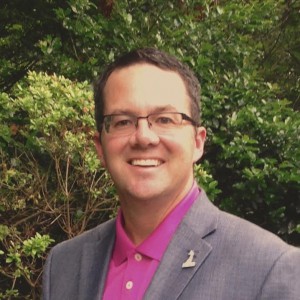 Explain the success of the Symetra Tour, particularly here in Michigan with its three events.

Part of its success must be attributable to the LPGA Tour itself. Not every community can afford an LPGA Tour event as in the case of Grand Rapids and the Meijer LPGA Classic. For other communities and companies that are excited about doing something with the LPGA and professional golf, the Symetra Tour is a nice alternative. Prior to this year’s inaugural event at Tullymore, there have been events in Battle Creek and Harris, Michigan. Both events have been well-received and have helped pave the way for Tullymore.

But ultimately the players are the driving factor for the Symetra’s success. The individual stories on our Tour are quite compelling. Players represent over 31 countries from around the world. So the key is for people who are interested in the Tour to experience the ladies and the Tour first hand. Many parents and grandparents can see their own daughters and granddaughters chasing their dreams through these players’ eyes.

Talk about the potential star power of the Symetra Tour.

This Tour allows spectators to be up close and personal with players before some of them become super stars. For example, Lorena Ochoa and Inbee Park both graduated from this Tour before becoming household names on the LPGA. It’s an opportunity for fans to know these players before they take their games to the next level. It’s akin to growing up in Kalamazoo and seeing Derek Jeter playing shortstop in high school before he became an All-Star with the Yankees. That’s a significant memory. For people who attended the Futures Tour event in Grand Rapids, they may remember Christina Kim as a player. 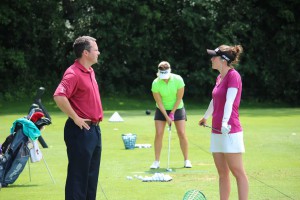 Nichols chatting on the range with Brittany Altomare

Describe the synergy between the LPGA and the Symetra Tour.

Prior to 2007, the Symetra was a stand alone business and wasn’t part of the LPGA. But in 2007 the two organizations got together and the dynamic changed. Once it came in-house, the Symetra Tour became part of the fabric of the LPGA. The Commissioner’s biggest fear was a player arriving on the LPGA Tour and not being ready for the media, the travel, dealing with sponsors and all of that. So within the LPGA building people understand the importance of the Symetra Tour. It’s integral to the future success of the LPGA. We’re now graduating ten players from the Symetra to the LPGA Tour. So the LPGA is being refreshed and replenished every year with new talent. And this new talent is gaining valuable experience about being on a Tour, giving them the best opportunity for success.

What’s the most misunderstood aspect of the Symetra Tour?

The number one misperception is that people don’t understand the quality of the golf that’s played on this tour. It boils down usually like this for many people: If I’ve never heard of the golfer, then she must not be that good. In fact, these ladies are only a stroke or a stroke and a half away from joining the LPGA Tour. Another way to look at it is that there are probably 1500 individuals who are professional football players, 50 players times 30 NFL teams. They’re considered the elite of the elite. In contrast, there are only 144 players on the LPGA Tour so these players are part of the smaller professional playing base. With fewer opportunities to play golf at the highest level, Symetra players represent an elite field.

What’s special about this Tour?

Realizing the LPGA Tour is truly a global tour and players knowing their best chance to get to that lofty stage is through the Symetra Tour. Instead of a one week crapshoot like a Qualifying Tournament, the Symetra Tour provides 23 weeks of tournament play for players to prove themselves. The other special aspect is the hosting community. It’s exciting to see how communities welcome the players and make them part of a positive experience. And the players really appreciate the local support and being recognized as professional Tour golfers.

Do you have a favorite story or anecdote about the Tour?

I arrived at my first Symetra event in July 2012. Before that time, the only such event I had ever attended was as a spectator in Grand Rapids when the Futures Tour event was held at Boulder Creek GC many years ago. Being so new to the Tour, I felt like I was a college freshman: I don’t know anything and don’t know where to go. I’m in charge of the tour but I didn’t know the players and barely knew the staff. Walking into the hospitality tent, one of the players comes up to me and says, “You must be Mike.” She told me her name was “Dolores White” and we exchanged pleasantries. After she tells me she’s from Lakeland, Fla., I asked her if she ever attended the Symetra tournament there. She said, “The whole reason I’m here today is because my parents took me to that golf tournament as a seven-year-old.” She then related how she became interested in the game, developed as an accomplished junior golfer and earned a full ride to Wake Forest University. After graduation, she joined the Symetra Tour.

By attending a Symetra event as a junior it planted the dream for White of playing professional golf at the highest level. At the end of the day, she didn’t end up on the LPGA Tour but she had the opportunity to chase her dream. She’s now working as a membership director at a private club outside Baltimore, MD. That’s the kind of story that keeps me motivated about the Tour.