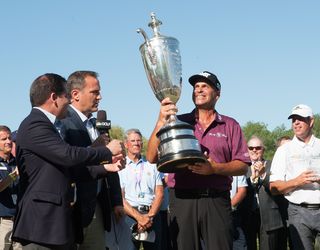 (Benton Harbor, Mich.) What was the biggest story coming out of the Senior PGA Championship at Harbor Shores? Well, besides the popular victory by Rocco Mediate in record breaking wire-to-wire fashion, I’d vote for the announcement that the tournament will be returning to SW Michigan at least four more times in 2017, 2019, 2021 and 2023. For area residents if not the state, that’s good news and reflective of Whirlpool’s corporate commitment to not only the tournament but to the long term health of the Harbor Shores development. In short, Whirlpool and KitchenAid as the presenting sponsor remain all in.

For sports business mavens, the added announcement that KitchenAid will now be the title sponsor of the oldest senior championship in golf raised some admiring eyebrows. And it lasts until 2024! As someone observed, “securing a long term title sponsor in this highly competitive space is quite the accomplishment.” So a tip of the hat to the PGA of America, to Whirlpool, Harbor Shores and the Benton Harbor community for forging such a successful alliance.

Here are some other observations after a visit to the 2016 Senior PGA Championship:

Rocco Mediate: Opening with a sensational nine-under-par 62, Mediate admitted he didn’t see it coming. He thanked longtime friend and instructor Rick Smith, the Michigan Golf Hall of Fame member long associated with Treetops Resort, for bolstering his confidence despite lackluster play. For many of us old timers in the Michigan media, we remember frequently seeing “Rocco” up at Treetops with fellow Florida Southern University cronies Lee Janzen and Smith. Mediate also thanked several others for their incisive tips. One close friend insisted Mediate’s irons didn’t have enough loft. Mediate had them checked and lo and behold the guy was right and the lofts were adjusted. Another friend, after prompting by Mediate, observed that he was standing too far from the ball. Presto! Mediate made the slight change at address and started “covering the ball.”

But you don’t win championships by ball-striking alone. You have to get the ball into the hole. On that note, Mediate gave a nod to John Daly for a putting tip prior to the tournament. Daly noticed Mediate was moving his knees during his putting stroke. Mediate quieted his lower body and started making more putts. I remember a similar story back at the 2001 Buick Open Media Day when Mediate was brought in as the defending champion. At the time, Tiger Woods was in his heyday as the game’s dominant player and Mediate was asked to comment. I recall Mediate marveling at Woods putting wizardry. At the time, Mediate said when “Tiger putts it’s as if his lower body is embedded in cement. There’s no movement at all.” Now 15 years hence, Mediate ironically was reminded of that same tip.

Practice range: The Michigan Section of the PGA admirably staffed and ran the practice range at Harbor Shores. Pros from around the area and state volunteered their services to oversee the range and making sure all the details were properly handled. I spent some time there on Thursday and chatted with the Section’s Kevin Helm and Justin Phillips. Along the way, I was reminded how relaxed many of the “Senior pros” are in contrast to the all-business PGA Tour competitors. For example, Jesper Parnevik warmed up by hitting shots with a weighted club directly in front of the grandstand where a pair of elderly spectators were sitting. After hearing their comments about the club, Parnevik interrupted his routine and kindly brought the club over to them, allowing them to hold it and feel its weight. Can you imagine one of the regular PGA Tour stars doing something like that? And this was on Thursday, the first day of the championship.

By the way, the player with the biggest gallery at the practice range was not defending champion Colin Montgomerie or even Bernhard Langer but rather John Daly, all ablaze in his loudmouth garb. I don’t know what was more impressive: Daly’s prodigious drives or his prodigious beer gut! It recalled a crack about former Tour player Phil Rodgers: “He’s being sponsored by Michelob Heavy!”

Harbor Shores GC: Spectacular summer-like weather made for an ideal week to watch golf at Harbor Shores. Candidly, I’ve always had qualms with this too penal layout but I fully understand how it all took place for the benefit of reclaiming forsaken property and transforming it into an attractive golf community. In terms of watching golf action, it’s a rigorous test. It’s the opposite of Warwick Hills where parallel fairways and a more confined area afforded ideal gallery viewing. To its credit, tournament organizers provided a free shuttle service with multiple stops throughout the sprawling layout. And regardless of how one feels about the Jack Nicklaus-designed course, it looked wonderful on television, particularly with the scenic views of Lake Michigan. As one spectator exclaimed after a long drive by Langer, “that’s Pure Michigan!”