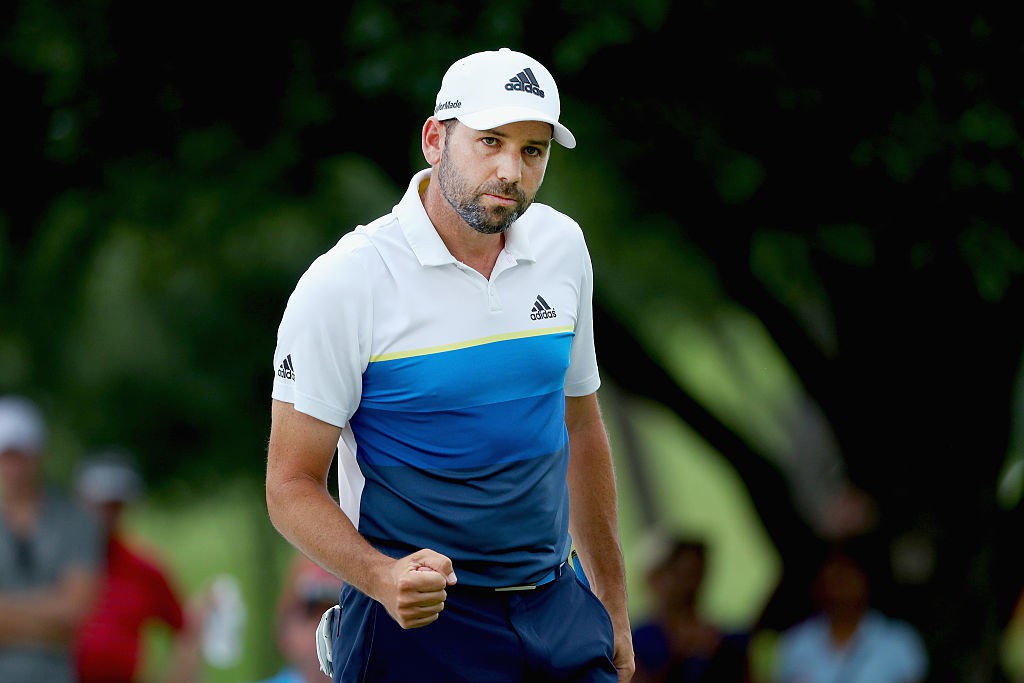 (Augusta, GA.) At the start of the 81st Masters, who would have thought the number one player in the world would slip and fall and withdraw from the tournament while Sergio Garcia would remain steady and sure-footed in winning his first major? As in the case with so many Masters, no one saw it coming. So how did Garcia finally manage to rid himself of the hair shirt labeled “best player without a major?”

It began with a new attitude and mindset. “On the drive this morning to the course, I felt very calm, the calmest I ever felt on the Sunday of a major,” said Garcia, winless in 73 previous majors. But even before Sunday’s dramatic and pressure-packed round, Garcia’s approach to the Masters and Augusta was different. After Friday’s round when asked about his comment five years ago at the Masters when he shot a 77 and lamented, “In 13 years, I’ve come to the conclusion that I need to play for second or third place,” Garcia admitted, “Yeah, I was frustrated. But like I said before, I probably didn’t accept things as well as I should have.” Earlier, he said, “I’m working on trying to accept things which can happen here and can happen anywhere.”

Bursting on the pro scene at only 19 at the 1999 PGA Championship at Medinah, he challenged and pushed Tiger Woods for the title and was remembered for his mid-air scissor kick after a trouble shot out of the trees. He’s won nine times on PGA Tour and 19 European events as well as being a fierce competitor in the Ryder Cup. Garcia started playing golf at the age of three and became club champion at 12, all under the eye of his father, Victor, a teaching professional at their home club of Club de Campo del Mediterranean. At the ’99 Masters, he was the low amateur and sat next to winner Jose Maria Olazabal, one of his idols, in Butler Cabin.

But Garcia’s career incurred some notable dips as well. For a long period, he was tormented by a pre-shot routine of incessant waggles and regripping of the club. At the 2002 U.S. Open at Bethpage, antsy fans called him “El Waggle” and “Waggle Boy.” Garcia responded by giving one fan the middle finger. It was here too that Garcia bitterly complained after playing in awful weather in Friday’s morning round, saying the USGA would have stopped play if Tiger Woods had been out there. As one golf writer wrote at the time, Garcia’s “charming impetuosity turned into petulance.”

At the 2007 Open Championship after losing to Padraig Harrington in a play-off, Garcia demonstrated a lack of class and composure, blaming his latest misfortune on bad luck (“I should write a book on how to not miss a shot in the playoff and shoot 1-over”) and conspiracy (“Seemed to take a long time to rake two bunkers” as a tardy greens crew delayed his approach to 18.) It was a sad display of self-pity, woe-is-me, and somebody-up-there-doesn’t-like-me mentality.

But this is 2017 and Garcia has matured and mellowed. Finally. Certainly, the presence of his fiancée, Angela Akins, a reporter for the Golf Channel and former player at University of Texas, has made a huge difference. She and her family have contributed to a “calming influence,” instilling confidence in him. On Sunday night, Garcia referred to it as “getting some good help—thinking a bit different and little bit more positive.”

Along with Akins, he also began to embrace Augusta National. “I started feeling uncomfortable on the course,” said Garcia on Sunday about his outlook in past Masters. “But I kind of came to peace with it the last three or four years. And I accepted what Augusta gives and takes. And I think because of that I’m able to stand here today.”

The ultimate test of Garcia’s new found peace and poise occurred on Sunday in the final round at the 13th hole. Garcia’s drive caught a tree and fell into a unplayable lie. At the time, he was two shots behind Justin Rose and it appeared the tournament was on the brink of being lost. “In the past, I would’ve started going at my caddie,” Garcia said. “Now I’m like, ‘If that’s what supposed to happen, let it happen. Let’s see if we can have a hell of a finish. And if not, we’ll shake Justin’s hand when it’s over.’” As it turned out, Garcia salvaged a gutsy par, tying the hole score of Rose.

On Saturday, it was also at the par-five 13th where Garcia benefitted from a pivotal break of good fortune—a footnote of every Masters champion. His four-iron approach shot to the green fell short but somehow managed to stay on the closely mown bank above Rae’s Creek. It was reminiscent of Fred Couples’s ball hanging up on bank of no. 12 en route to his 1992 Masters victory. Garcia would end up making a birdie on 13, a possible two-shot swing.

The other ingredients to Garcia’s Masters were his ball-striking prowess and solid putting. For the week, he was T-2 in the all-important greens in regulation (GIR) statistic, hitting 54 out of 72 greens or 75%. Equally crucial was his putting: he holed 119 putts, good for T-20th in the field, and incurring only one three-putt, matching the best in the tournament. In sand saves, he was five out of six. He’s found confidence in the TaylorMade Spider mallet putter, adopted by a number of players including Dustin Johnson. “It swings very, very nicely, which is great. And it feels good in my hands,” said Garcia.

Also feeling good in his hands is the sterling silver replica Masters trophy. “It’s been an amazing week. I’m going to enjoy it for the rest of my life.”