Looking back at 2017, one of my golf and travel highlights was visiting the Isle of Man. Located in the middle of the northern Irish Sea and almost equidistant between Liverpool, England and Belfast, Northern Ireland, the Isle of Man is not a usual overseas destination for American golfers. Most are content with the admired offerings of Irish and Scottish links courses. Yet more adventuresome, curious and independent travelers definitely should include a detour if not a dedicated trip to the Isle of Man. Here’s why:

Castletown Golf Links: Located on a stunning piece of land, the Langness Peninsula, and surrounded on all three sides by the sea, Castletown boasts a most dramatic and stirring layout. In fact, few links courses can rival it, in my estimation, for its raw and natural beauty. This is largely due to how the course sits well above sea level so its vistas are not obstructed by sand dunes.

Formed in 1892, the club retained none other than Tom Morris Sr., a.k.a. Old Tom Morris, to lay out the course on its present site in the early 1900s. At the time, “Old Tom” was the preeminent name in the game—akin to Jack Nicklaus—as both an acclaimed and beloved champion (four Open titles) and sought after designer (Royal Country Down, Lahinch, Muirfield, Dornoch, et al.) He was a pioneer of the modern game, too. He standardized the length of a golf course to 18 holes (St. Andrews was once 22 holes) and introduced top-dressing and the use of push mowers in green maintenance. Oh yes, he also tutored an apprentice at Dornoch by the name of Donald Ross. In the seminal The Golf Course by Geoffrey Cornish and Ron Whitten, it states Morris “practiced the art of design in an age when it was virtually impossible to alter existing contours in laying out a course…A native of the links with an eye for every shot in golf, he developed a skill for utilizing the natural terrain and its features.”

Thanks to Morris and later to post-WW II course renovator Phillip Mackenzie Ross, who in 1972 was the first president of the British Association of Golf Course Architects, Castletown remains a treasured heirloom of links design. There’s nothing artificial or forced in its presentation and the routing flows wonderfully in and around the peninsula where seals, sharks, dolphins, and migratory birds abound.

There’s even a ‘road hole’ here, stroke index no. 1, at the 423-yard par-four fifth. From an elevated tee, the hole bends left to right and with the entrance road to the course bordering down the right side. There’s very little bail out area on the left because of dense gorse so an accurate and strong strike off the tee is a must.

The par-five seventh, called Racecourse, adds another historical footnote to the course and the peninsula. According to local records, the first ever Manx Derby over three furlongs was held on the Langness Peninsula, 150 years before the first English Derby. So one may quip while playing the 572-yard seventh, “there are simply horses for courses.”

But the last three holes at Castletown are truly remarkable. The par-three 16th is aptly named “Cliffs” as it sits high on a rocky point of the peninsula. The green is situated short of some yawning cliffs with pounding surf echoing a golfer’s heart who’s found the green with a well-struck long iron shot.

Against the prevailing wind, the par-four 17th, “Gully,” requires a brave and strong tee shot over a breathtakingly scenic and brutal ravine. The inestimable and World Golf Hall of Fame writer Henry Longhurst ranked it as one of the best holes in golf. Anywhere. Talk about an endorsement in a pre-hype age!

And then there’s the 18th, a par-four at 413 yards. With the small green nestled down and just inside the sea’s edge, it’s essentially a blind dogleg that devilishly curls around three pot bunkers. It represents a spirited end to a rousing round of golf where the wind and weather will largely dictate the outcomes scribbled on the scorecard.

A few final comments: The turf is bouncy and firm and its overall conditioning and health would please Old Tom today. The clubhouse was rebuilt a few years ago and it’s now nicely furnished and decorated and offers broad views of the course. There’s good food and drink, too. The only aspect that’s sorely lacking at Castletown is a resolution to the fate of the derelict and former hotel sitting next to the clubhouse. In early 2015, plans were announced for a new boutique hotel on the site but some residents remain pessimistic about its prospects. However, there are plenty of options for accommodations throughout the Isle.

The important thing is just to get there. On that note, one recent and happy visitor posted this priceless blurb on TripAdvisor: “I would swim to the Isle of Man to play this course again!” 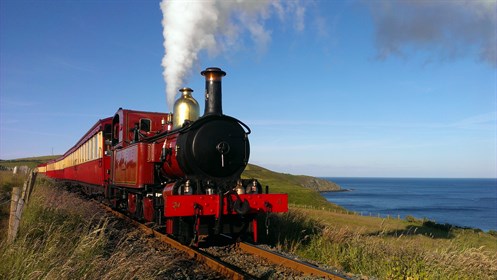 Steam Railway: a trip back in time

Isle of Man Railways: Global train enthusiasts come to the Isle because of its outstanding collection of Victorian railways. We hopped on the enchanting Steam Railway that runs for over 15 miles from Douglas to Port Erin. Sporting a vintage locomotive and berths, it’s deemed the oldest gauge railway in continuous operation in the British Isles. It was a fun and relaxing way to view the wondrous, rolling countryside while being transported to not only Port Erin but back in time.

The Manx Museum: In Douglas, this museum delivers an incredible amount of history and insight into the Island’s rich heritage, all packed neatly inside modest quarters that once housed a hospital. With expert exhibits and illustrations, it tells the story of how the Island evolved from being the center of a Viking kingdom to a Victorian holiday destination to being known internationally for its TT motorcycle races. Of special note is the Museum’s Archives staffed with knowledgeable and helpful people willing to assist overseas travelers, like us, with family tree matters. Yes, this writer’s paternal ancestors originated here. 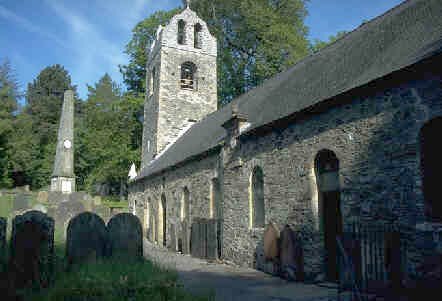 Old Kirk Braddan: Due to our family roots, this preserved church site was one of the highlights of our visit. Dedicated to St. Brendan or Bradden, this church represents fourteen centuries of Christian worship. Stones from the first Celtic Keeli (chapel) can be traced back to 400 AD. On the grounds remains a cemetery where a number of my ancestors’ gravestones were found. In fact, my fourth-great grandfather was the Parish Clerk here for 45 years. For dedicated family historians like my spouse Deb the day at Kirk Braddan was exhilarating.

Dining: We had excellent meals during our stay. Recommended for dinner is the Old Court House in Douglas and for lunch we were delighted with an outdoor table at The Creek Inn overlooking Peel’s quiet harbor. For amazing views and good food, it was hard to match the Sound Cafe, located at the tip of the Island near Port St. Mary and overlooking the Calf of Man, a small island in the near distance separated by a narrow stretch of water and home to a large colony of seals and native sea birds.

Staying there: Located conveniently on the Queen’s Promenade in Douglas, the Inglewood Guest House suited us in fine and friendly fashion, thanks to the attentiveness of Andy and Pip Cross. But the choices for hotels, B & Bs, serviced apartments etc. are plentiful on the Isle to fit any budget or comfort level.

Getting around: To save us stress, we opted not to rent a car and instead signed up for a short-term Go Card, providing unlimited travel on all scheduled bus and rail services on the island. Filling in the gaps and providing top-notch and timely service was Richard Green of Greens Chauffeur Drive. Richard was a vital difference maker for us to squeeze in various sites and destinations in a short period of time.

Getting there: Our Aer Lingus flight from Dublin to Douglas was less than 50 minutes and it was a breeze. Most airlines operate daily flights to the Island with those from the UK taking just 30 minutes in some locales. Another popular option is by ferry whether arriving as a foot passenger or bringing a car. The oldest continually operating passenger shipping company in the world, the Steam Packet Company operates ferry services to the Isle of Man from Heysham, Liverpool, Birkenhead, Dublin, and Belfast.

Unlike my travel compatriot praising Castletown Golf Links, I wouldn’t swim to the Isle of Man. But I now understand the motivation.

For more information about the Isle of Man visit www.isleofman.com