So how did the Golf Show come about?

The germ of the idea was planted after I attended the first Detroit Golf Show in 1988 at the Novi Hilton. Produced by the late Roy Rasmussen who published Michigan Golf Map and Guidebook, the Golf Show was an immediate success in terms of attendance. It was apparent there was an untapped market for such a show. At the time I was editor and part owner of Michigan Golfer magazine, so I had experience and contacts in the resort and public golf sector. As I drove back to Grand Rapids from Novi that day, I knew the opportunity seemed ripe for a West Michigan version of the Detroit Show.

Without any business plan or guidance, I contacted some possible venues for 1989. I called the downtown Grand Rapids exhibition space and learned the only available date was over the Easter weekend. I didn’t know much but I knew that wasn’t a good weekend. Somehow, I called Cascade Ice Arena located in southeast Grand Rapids and learned the weekend of March 4-5, 1989 was not only available but priced affordably. It wasn’t the most attractive space but it had the size and dimensions to hold a golf show. Even with considerable doubts, I booked it and figured, “Well, you gotta start someplace.”

For this first show, I teamed up with a young producer of consumer hot rod shows out of Detroit. My thought was a cooperative effort would be easier and faster for learning the ropes of the “show business” while setting the stage for other golf shows around country. I soon learned that my knowledge of golf and the Michigan golf business were the most valuable assets in staging a show. However, there were some marginal benefits in partnering with the Detroit outfit.

For that inaugural show, there were 62 exhibitors with most of the major golf courses and resorts in attendance. Most of them were already doing business with Michigan Golfer so it wasn’t a particularly hard sell.

In terms of golf equipment, Dick Shaub of the Golfhaus, the area’s first and largest golf retailer, reserved a block of booths. Incidentally, Shaub founded his store after winning $10,000 in the Michigan Lottery.

Of those original exhibitors, a handful have been faithful and constant exhibitors ever since— Boyne USA, Crystal Mountain, Golf Association of Michigan, Grand Traverse Resort, Petoskey Area Visitors Bureau, Shanty Creek/Schuss Mountain and Treetops Resort. A number of other exhibitors have missed only a few shows such as Michigan Golfer and selected resorts.

Along with Michigan Golfer, 1989 sponsors included WWMT-TV 3 in Kalamazoo which was the CBS affiliate for the market and the Dan Pfeiffer Lincoln-Mercury dealership.

The one aspect of the Detroit show I wanted to improve upon was in its activities and attractions which were centered on booths and selling and not much else. As an editor, I wanted more content for the show. So I developed a line up of seminars and clinics. 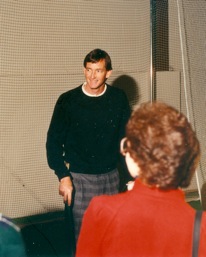 With the Aldila shaft company being a current advertiser of Michigan Golfer, I contacted the principals there and discussed the possibility of the company sponsoring an appearance of nationally known instructor Hank Haney, an Aldila staff member. Lo and behold they agreed and the celebrated instructor for Mark O’Meara was inked for Grand Rapids. I made a similar deal with Garland who sponsored an appearance of Evan “Big Cat” Williams, a two-time National Long Driving Champion who represented the Gaylord resort. 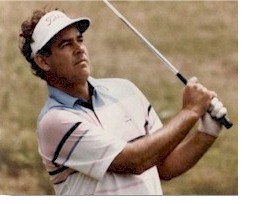 As someone who has long admired PGA golf professionals for their skill and prowess in golf instruction, I arranged for Mike Hebron, a Master PGA Professional and author of the highly regarded book, “See and Feel the Inside Move the Outside” to come from New York to Grand Rapids and give clinics on both Saturday and Friday. Hebron ended up being the PGA National Teacher of the Year in 1991.

In addition to these “headliners,” other speakers included Jeff Rivard of the GAM talking about rules, Bruce Fossum, the golf coach at Michigan State, and Ed Ripmaster of the West Michigan Junior Tour. With the exception of the headliners, some of these seminars were sparsely attended. For example, I soon discovered “learning the rules” is a lauded goal but it’s a tough sell for the average golfer.

The other quick lesson I learned about consumer shows is that you can’t control the weather. After months of planning, the Golf Show opened on Saturday, March 4 and was a met by a crippling ice storm. In fact, it was so bad local radio announcers advised listeners to stay home and off the roads. In desperation, I got on the phone and told a few radio stations that the inaugural WMGS was still being held and the doors were opened. Luckily, temperatures began to rise and the ice slowly melted. Nearing noon, the crowd started to pick up and people slowly entered the show. I had hired a pair of high school students to direct parking and some of the lot was so icy that they could literally push the cars into spaces. As I later cracked, “I put on Golf Show and a hockey game broke out in the parking lot.”

After an inauspicious start, the Golf Show ended its first day on a strong note. Exhibitors were understanding about how the weather affected the morning turnout and were bolstered by the afternoon’s better attendance. The general comments from patrons and exhibitors alike were very favorable.

Sunday’s attendance got off to strong start, thanks to better weather and the attraction of “Big Cat” Williams. A cameraman from TV-3 showed up and asked me when Big Cat was driving that golf ball through a phone booth. I said, “Phone booth? No, he’s driving a golf ball through a phone book!” The cameraman then showed me my press release. “Hey, it says right here phone booth.” I looked at the section and I could see how my basic Apple printer made the word “book” appear like “booth.”

I told Big Cat about the incident and he got a big laugh about it. “I’m good but not that good!” he said. He did take a large Grand Rapids telephone directory (remember those?) and placed it in front of his teed up ball. With a mighty swing, that ball penetrated the phone book and landed safely in the hitting net. It got a big ovation from the crowd in attendance.

The show ended on a high note and exhibitors were pleased with the attendance. Almost all of them said they’d be back next year. I breathed a sigh of relief and was very happy the show was a success. I had lost 12 pounds working and worrying about the show and it took me a while to recuperate. But a month later, I contacted Grand Rapids Community College and rented space at its Ford Fieldhouse for the second annual West Michigan Golf Show. There was no turning back.

ShowSpan Inc., based in Grand Rapids, took over the show in 2002 and continued to make it grow and prosper. I’ve fortunate to be part of every show since its inception. I’m particularly indebted to Carolyn Alt and Mike Wilbraham, ShowSpan’s expert and tireless producers, for having me be a part of their team. It’s been a great run.