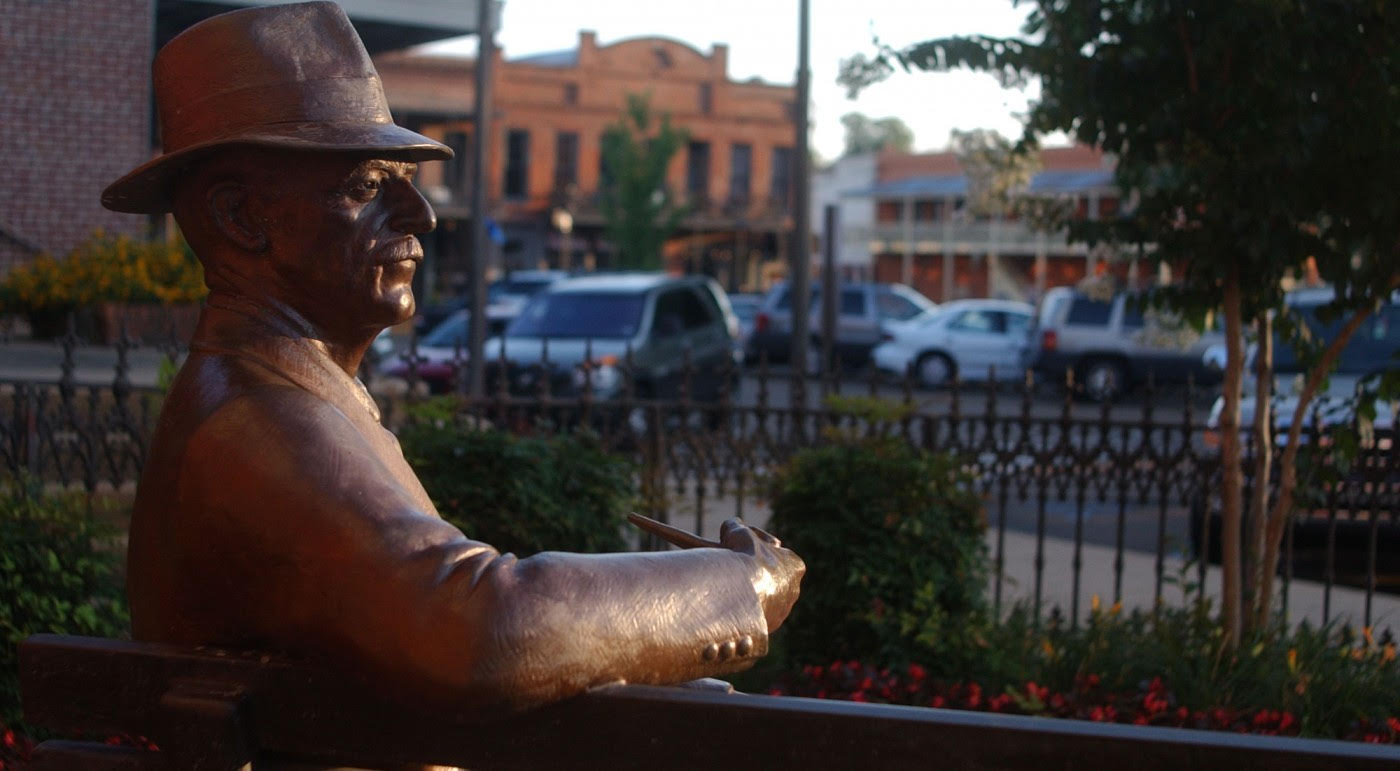 Faulkner still has a hold on Oxford

(Oxford, MS) It was this time last year when a new star emerged on the PGA Tour. In his second start on Tour, rookie Cameron Champ won the Sanderson Farms Championship in Jackson, MS. The long-hitting Champ finished with a record-breaking 21-under par 267 total. Although he struggled at times this past year, he still won over $1.6 million and finished 62nd in the FedEx standings.  He also led the Tour in driving distance with an average of 318 yards. This week he’s defending his title at the Country Club of Jackson.

This past March, my wife and I stopped for an overnight in Jackson on our way to a longer stay in Oxford, about two hours north of the capital city.

Two brief travel recommendations about Jackson. A tour of the State Capitol is a must. Taking three years to build, it’s a magnificent monument to the Beaux Arts style of architecture and the rotunda is stunning. If time allows, avail yourself of a guided tour which are provided weekdays.

The other travel tip is to visit the Smith Robertson Museum and Cultural Center in Jackson. It’s housed in the first public school for African-American children in Jackson and remained open until 1971. One of its many famed students is noted author Richard Wright, heralded for his Black Boy and Native Son novels. Today this building holds a fascinating collection of African-American artifacts, books, papers and exhibits dedicated to preserving a rich and often neglected heritage. Particularly noteworthy are the Africa to Mississippi exhibit and the Medgar Evans Retrospective Gallery.

But Oxford was our main destination for two primary reasons: 1. It’s home to the University of Mississippi (Ole Miss), a campus I’ve long wanted to visit. 2. It’s where author William Faulkner spent most of his life and his home, Rowan Oak, is a literary destination.

And Oxford is more than those components as we pleasantly discovered. For one it’s an area increasingly known for its culinary assets, boasting some award-winning restaurants. More on that later.

With the centrally located Chancellor’s Hotel serving as our accommodations, we were in ideal position to stroll around Oxford and savor its understated attractions and amenities. In no particular order, the highlights of our most enjoyable visit to this friendly city were:

City Square: It could serve as movie set it’s such a postcard perfect setting. Circling around the County Courthouse are scores of thriving and eclectic businesses and restaurants. Our favorites were Nielson’s, the south’s oldest department store and Square Books, a delightful haven for book lovers, specializing in southern and regional writers. 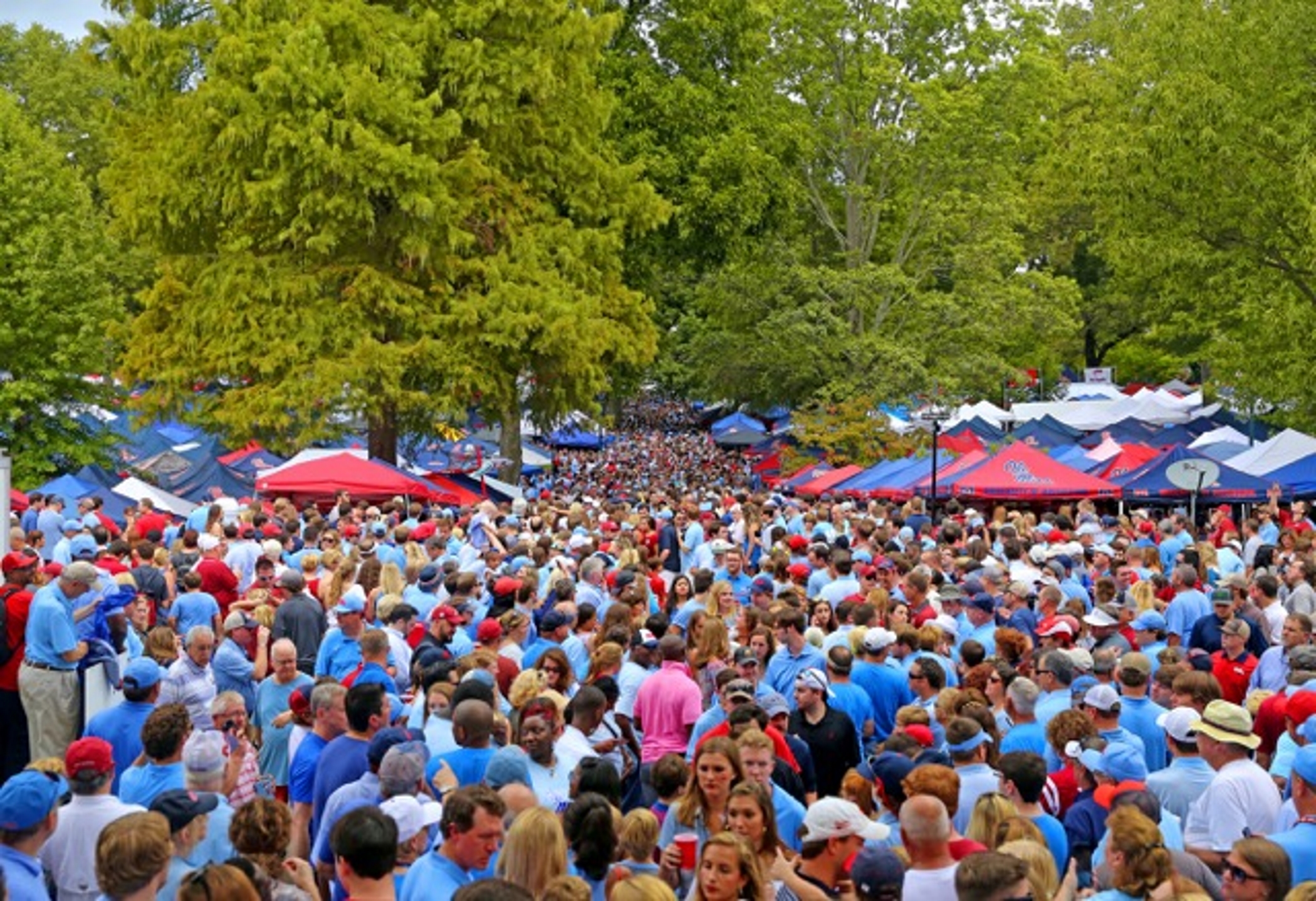 Ole Miss University: Another movie set in terms of being the epitome of a leafy, inviting campus. A walk around the well-appointed grounds gave us an appreciation for its architecture and overall design. In particular, I took special note of The Grove, the legendary scene of arguably the best football tailgating in the SEC if not the country. Located in the middle of campus, on home football Saturdays, it’s transformed into a lively tented village. We also appreciated the football and baseball stadia, University Circle and the Civil Rights Monument honoring James Meredith and others who fought for equal educational opportunities in the South.

Rowan Oak: Home to William Faulkner, Rowan Oak’s home and grounds are faithfully preserved and cared for by the University of Miss. Museum. Faulkner bought the primitive Greek revival style house  in 1930. The vast majority of Faulkner’s work was written here and the furnishings, paintings, his typewriter and books are all intact. A highlight for me was seeing a set of golf clubs in one of the rooms. One of the volunteers said Faulkner wasn’t an avid golfer but he did play at a nearby public course. Though certainly not an expert, I don’t recall any mention before of Faulkner playing golf. Since the visit, I’ve learned his niece remembered her famous uncle playing golf barefoot. On the tour, one can listen on a headset to Faulkner’s Nobel Prize acceptance speech, a Gettysburg Address-like for its power and simplicity.

By the way, in front of City Hall on the City Square is an impressive bronze sculpture of Faulkner sitting on a bench with pipe in hand. 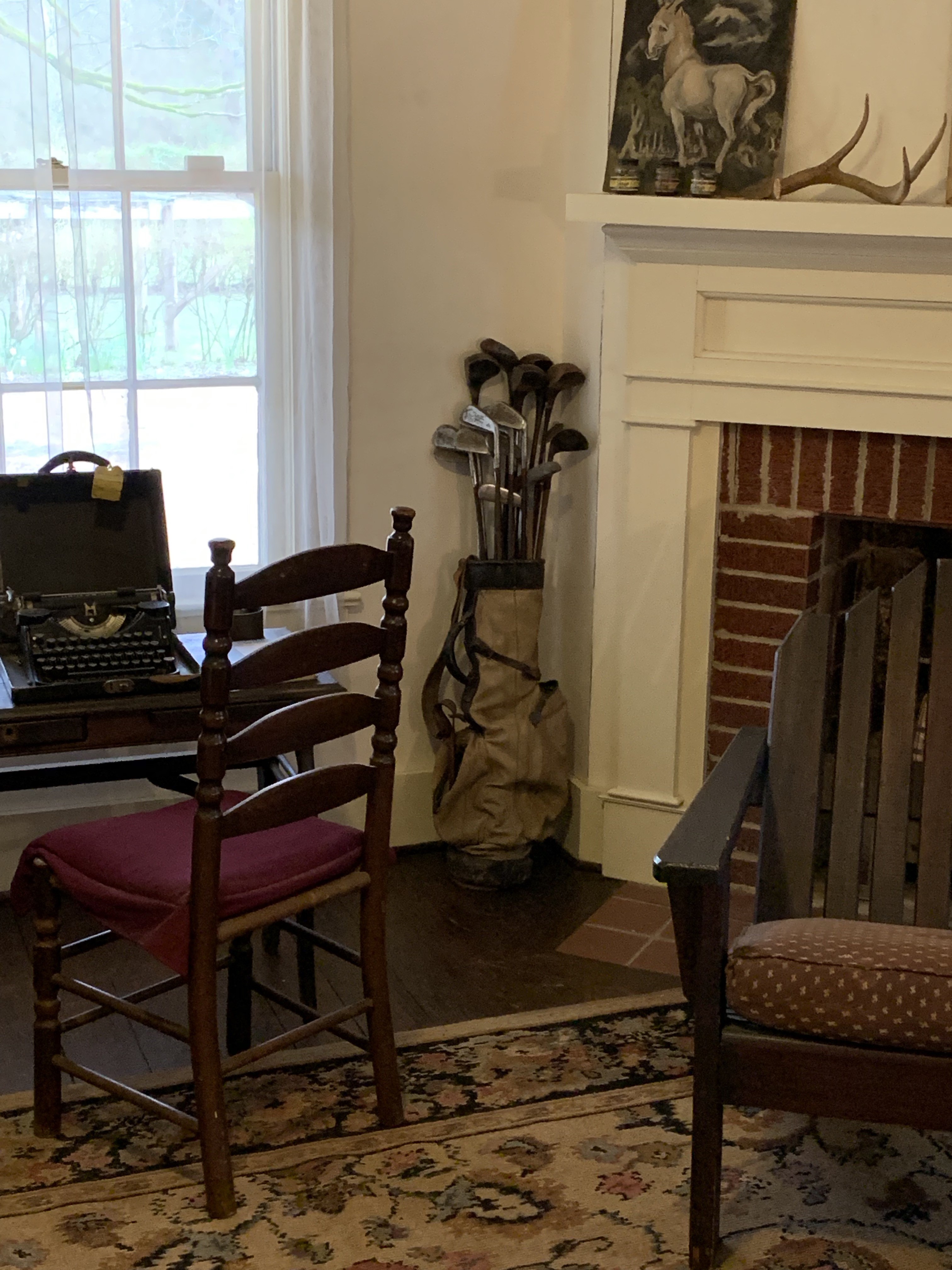 Next to his typewriter, Faulkner’s golf clubs

Driving Tour of Oxford: Terry Hawkins, a retired police officer, provided us with an informative driving tour of the area. Living in Oxford his entire life and with a finger on its pulse and history, he gave us a terrific one-hour overview of Oxford. Very recommended. Oh yes, Hawkins explained the frequently heard Ole Miss expression of “Hotty Toddy.” He compared it to other state’s greetings like “Roll Tide,” “Go Aggies,” or for Michiganders “Go Blue” or “Go State.”

U. of Mississippi Museum: Within walking distance via a path from Rowan Oak, this Museum was quite the surprise for its collection of Greek and Roman antiquities, American art featuring Georgia O’Keefe and Man Ray, Southern folk art collection, and an impressive Theora Hamblett collection.

Food and dining: In my preliminary research about Oxford, I learned it’s a foodie destination with a host of highly rated restaurants. We couldn’t argue with that claim as we had a sumptuous lunch at the award-winning City Grocery and a great dinner at the Snack Bar whose chef Vishwesh Bhatt recently won a prestigious James Beard award for Best Chef-South. Another cozy dinner was relished at St. Leo, located just off the City Square. A hearty breakfast was had at Big Bad Breakfast, an always busy eatery favored by locals and tourists alike. For a happy hour libation, we opted for the The Coop, located on the fourth floor of Graduate Oxford.  If it were warmer, we would’ve been outdoors fully enjoying the view. 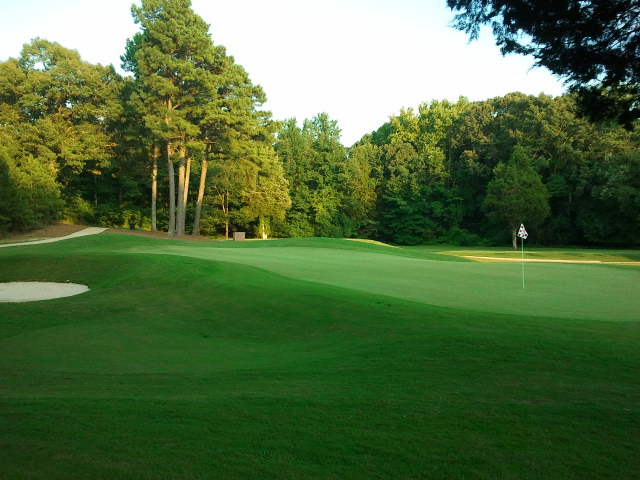 Golf: In spite of the inclement weather, it was my obligation to investigate local golf offerings. First off was a visit to the Ole Miss Golf Course. From the long drive into the property and looking around the clubhouse and practice facilities, this would be my choice to play a round in Oxford. The conditions and the layout looked great and the scorecard provided lots of options in terms of tees. Originally opened in 1973 with a design by Cary Middlecoff, the course underwent an extensive $3.5 million renovation in 2008 by Nathan Crace, a native Mississippian and a member of the American Society of Golf Course Architects. In fact, Golf Inc. magazine deemed it the third best renovation of the year.

Incidentally, in the parking lot were banners celebrating the 2017 NCAA individual golf championship of grad and state native Braden Thornberry who turned pro earlier this year. And it should be noted the current U.S. Amateur is Andy Ogletree, a native of Little Rock, MS. He’s the first Amateur champion from Mississippi. So the state is doing something right for producing talented players.

The other course used by Ole Miss golf teams is the private Country Club of Oxford, opened in 2006. I visited that layout as well. Surrounded by hardwoods and gentle rolling hills, the par 72, 7,028-yard course was designed by Jim Fazio.

Looking back, we squeezed in a lot of experiences into our all too short visit to Oxford. For sure, it was far quieter than on a home football weekend when The Grove and the town are overflowing with visitors. Maybe if we’re fortunate we’ll return someday in the fall and see Ole Miss and Oxford in all of its football glory.

Until then, let me simply say to Oxford, Thank you and Hotty Toddy!