On a Thursday morning at the Michigan Amateur at The Heather at Boyne Highlands, I defaulted back to my golf writer role as I followed the first Sweet Sixteen match of the day between Michigan State’s James Piot, Canton, and the 15-year-old sensation Lorenzo Pinili, Rochester Hills. Eschewing the usual hard copy reporter’s notebook, I used my iphone to record some whispered notes and observations during the match and afterwards.

Background: Piot was co-medalist along with fellow MSU player Andrew Walker, posting 68-66—134 while Pinili, as a Birmingham Brother Rice sophomore to be, shot 69-74—143 with his second round occurring during Tuesday afternoon’s wicked weather conditions. Piot, 21, is the 2018 GAM champion. As ably reported by Greg Johnson, the GAM’s contracted scribe, Pinili was playing in his first ever match play tournament and added, “his biggest win was last year in the Golfweek Junior Tour Championship.” 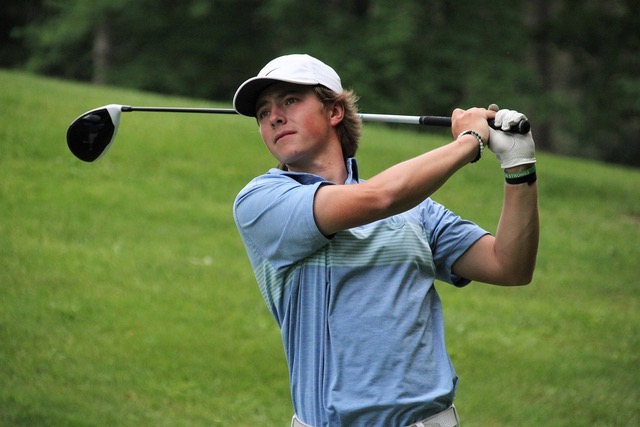 Both players hit big drives on the first hole. Although slightly built, the lean Pinili really hits up on the ball and generates considerable clubhead speed. Piot’s equally impressive. Yesterday I heard a player who was in Piot’s group the first two rounds say about him, “He’s a fearless driver, hits it all the time.” Piot went 1-up with a birdie.

The walking official for the match was Craig Reading, a long time and astute GAM rules official and a past officer and GAM Championships Committee Chair. Between holes, he said, “This is my favorite week of the year especially when it gets to match play.”

After Pinili evened the match with a birdie on the second hole, I had a conversation on the next hole with Lorenzo’s father, Rommel, who was “conspicuously inconpicuous” despite donning a smart and wide-brimmed hat. When asked how his precociously talented son became so enthralled with the game he said, “It all started when he was very young, watching me in front of the TV glued to Golf Channel. He just soaked all in. A little later, I bought him some plastic golf clubs and balls and he took to it right away. After that, I took him to a driving range and from then on he was hooked.” 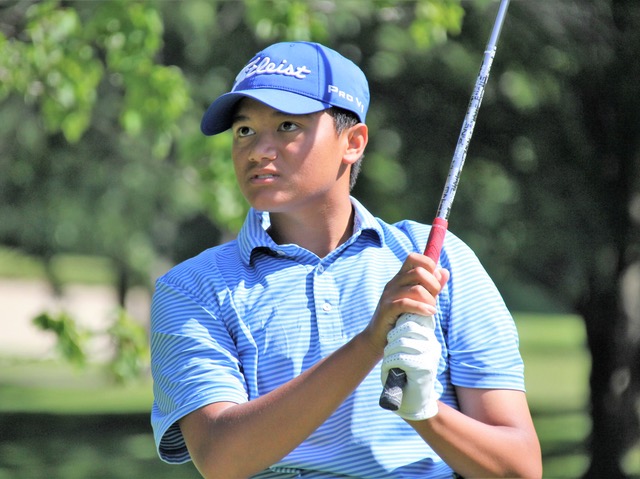 A physical therapist originally from the Philippines, Mr. Pinili also informed me Lorenzo’s first golf coach, Fieldstone’s teaching pro Marc White, was his caddie this week and that his current teacher is the CC of Detroit’s Adam Farabaugh. Finally, he summed up his son’s impressive start in the Amateur as, “this is more than what we ever expected. Getting this far is, yes, all gravy.”

From an up tee, ever “fearless” Piot drove the reachable yet hazard-protected third green while Pinili laid up. They both walked off the green with birdie, demonstrating alternate ways to get it done.

Interesting match play sequence on holes 5 & 6. After good drives, both players were poised to reach the par-five 5th green in two. Into a brisk and chilly wind, Pinili hit a towering three wood from 224 yards out, settling on the green only ten feet from the flag. Very impressive. Possibly affected, Piot flared out his iron shot well short of the green, some 50 yards. But his next wedge shot narrowly missed the cup and rolled twenty-five feet away on the green. Still away, Piot holed his birdie putt. Pinili’s makeable eagle putt missed and an unlikely “the hole is halved” was announced by Reading.

On the par-three 6th, Pinili had a solid shot to the center of the green while Piot followed with a pulled iron well left of the green. Walking ahead of the group, I found Piot’s ball just inside the hazard line but in a playable position. In another deft display, Piot softly wedged it out to within ten feet and ends up making par— as did Pinili— again maintaining an all square match.

After the first six holes, the pair had made six birdies.

On the par-four 8th hole and being one-up, Piot pushed his drive into the right rough. Walking ahead of him was his mother, Judy, who began to locate her son’s ball. From thirty out yards, James saw it and said aloud, “I got it.” Incidentally, he didn’t have a caddie on his bag.

In a classic sit-com type line, Judy jokingly said to herself, “Yeah, he can somehow see and find his ball thirty yards ahead in the rough but can’t see his dirty clothes lying in the middle of his bedroom.”

Pinili’s won the 8th hole with a birdie. Match all square.

After both players botched shots leading to bogies on the par-five 9th hole, the match was tied—with eight birdies divided equally between them.

On the par-four 10th hole with an up tee, Piot followed Pinili’s safe shot to within wedge distance of the green by striking another long and aggressive drive which found the front greenside bunker. Pinili’s wedged to within seven feet while Piot’s bunker shot left him with a slippery and downhill 15-footer for birdie. As he did earlier in the match, Piot drained his tougher putt first. But unfazed, Pinili’s putt fell as well.

Walking up the par-five 11th hole, I had a brief friendly chat with Brendan and Tyler Klimas, 17-year-old identical twins from Farmington Hills. They’ve known Pinili from junior golf encounters. Qualifying for Amateur for the first time this year, they both missed match play with Tyler going 70-85 and Brendan going 80-86. Although both fell victim to Tuesday afternoon’s horrid weather, neither voiced any rancor or complaint about their bad luck. Taking it well, they smiled and replied— in eerie unison— to my query about their debut year at the Amateur: “It was a good experience!”

The 11th hole: From the right rough, Piot’s second shot to the green was off-line and finished right of the green in the rough. From the middle of the fairway, Pinili’s second was on-line yet just caught the top side of the front bunker. A foot or more, it could have ended up close to the flag. Piot expertly flopped his 30-yard third shot to within four feet of the hole for a likely birdie. From a tough lie and stance, Pinili’s bladed his third shot over the green into the back bunker. When he didn’t get up and down for par, he conceded Piot’s birdie and now Piot went 1-up.

Two holes later with the same status for the match, Piot’s dad, Glenn, said this about his son to some people in the gallery along the 13th fairway, “He makes great flop shots but he’s gotta work on his ball-striking.”

With no telepathy in evidence, James responded to his father’s out-of-distance remarks and promptly won the next three holes with birdies, all the result of strong drives and stiffly accurate approach shots.

So a once close match ended with Piot prevailing 4 & 3 on the 15th green. Making five birdies on the first six holes of the back nine can quickly change a match.

Both players possess notable games and talent. I particularly liked how Piot is such a fast and intuitive player, wasting no time in sizing up and executing his shot. He’s also a birdie machine. In this match, he made nine in 14 holes! (For all rounds during the week, tourney runner-up Piot led the field with 37 birdies. Next with 22 birdies was champion Tyler Copp.) Putting it simply, James Piot is a force.

Lorenzo Pinili is also a terrific player. After the match in an interview with Greg Johnson, Piot described him as “the next big thing in junior golf, he’s a stud.”

In catching up with Marc White afterwards, he summarized to me Pinili’s strengths as a person and as a player: “For 15 years old, Lorenzo’s been the most mentally tough kid I know. There’s no quit in him, and he stays with his routine—doesn’t veer; doesn’t rush. Even during those monsoon conditions on Tuesday afternoon, he stayed with it and persevered. His swing mechanics remain real sound and repeatable.”

As I congratulated both players for the rousing match, put away my iphone and took a glance at the beautiful surroundings of Boyne Highlands in northern Michigan where I spent three hours outside in the clean and brightly lit air with nary an inking of a pandemic or civic unrest, I thought to myself Rommel Pinili nailed it.