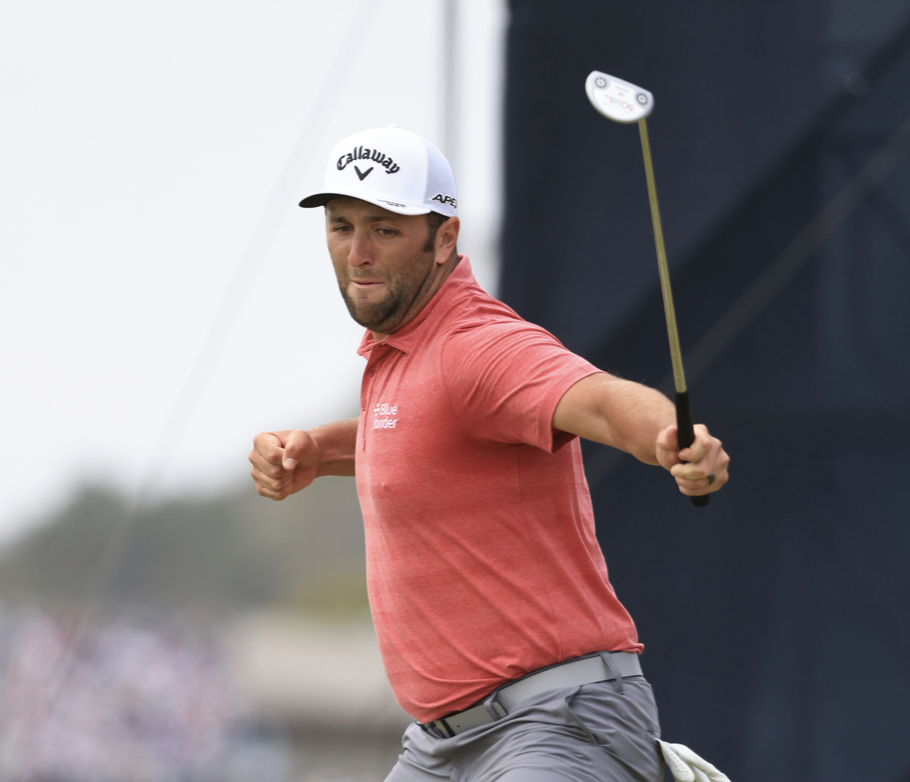 Jon Rahm punches his way to the U.S. Open

Father’s Day, to many, offers the ultimate Get-Out-of-Jail card. It’s the only day where a dad may play a round in the morning and then watch championship golf all afternoon and early evening. Without any guilt and complaint—at least in my household.

With a crowded leaderboard chock full of marquee names on Sunday, I was attached to the screen like a mesmerized moth. And as a bonus the tournament was being held on the West coast three hours behind viewers in Michigan.

The final round with Jon Rahm making dramatic birdies on the last two holes was as exciting as one could hope. He won the U.S. Open although some may wrongly argue Louis Oosthuizen lost it. The newest member of the Slam runner-up club, Oosthuizen badly stumbled with his costly drive on 17 leading to a bogey and again on 18 where he missed the fairway ruining his chances by going for the green and a tying eagle putt. Yet, he still only lost by a single shot.

It was poetic justice (or “karma” as explained afterwards by the champion) for the 26-year-old Spaniard. The Arizona State alum claimed the trophy after the PGA Tour’s Covid-19 protocols forced his painful withdrawal, while leading by six shots after three rounds, at the Memorial Tournament. To his credit, Rahm handled that harsh misfortune with aplomb and grace as demonstrated in his early press conference at Torrey Pines.

Due to a strong tee-to-green game, a rock-solid putting stroke and a tenacious mindset, Jon Rahm is now the no.1 Player in the World. I won’t be surprised a bit if it remains in his hands for quite awhile. To me, he seems driven to remain a dominant player. In any event, it’ll be fun to watch.

—Kudos to the USGA for expertly setting up Torrey Pines (South Course.) Wasn’t it enjoyable to watch good driving and accurate iron play properly rewarded? Making pars is not boring to watch when it comes to a major championship. Deep rough posed a risk to the bomb and gouge mentality. (Although Bryson DeChambleau’s distance off the tee and in the trodden down rough areas almost worked for 63 holes.) Most weeks on the PGA Tour it’s basically a putting contest. But not last week at Torrey Pines.

Heck, Phil Mickelson—long known as highly critical of the Rees Jones re-do at Torrey Pines—even praised the set-up. On Sunday, he said: “In the 30 years that I’ve played the U.S. Open, this is the best I’ve seen. I thought (the USGA) did a remarkable job, and I’m really proud and happy that it’s here at Torrey.”

Ever the diplomat, Rees Jones never took the bait when Mickelson threw barbs at his re-design work at Torrey Pines over a decade ago and again at Cog Hill in Chicago. In Michigan, Jones is known for his designs of Thousand Oaks in Grand Rapids and Black Lake in Onaway. Long known as the “Open Doctor,” he’s built an admirable career by deftly adapting courses to the changes of the modern game. Golf Digest caught up with Jones on Sunday night and he commented on the rough at Torrey:

“The rough was substantial,” Jones said. “This was the old U.S. Open setup that I think they’re going to be using moving forward.”  Amen to that!

By the way, the 79-year-old Jones was not viewing the action last week from the comforts of the clubhouse or a skybox. I saw him outside the ropes following DeChambleau during his final round. Most days he was on foot following the players. For sure, he was making mental notes.

—NBC-TV, Golf Channel, Peacock (Comcast) and the USGA’s live streaming service all provided hours of solid entertainment last week. Like many of my golf buddies, I’m gradually leaning toward the NBC announcers as my preferred cup of coffee. I  particularly like how Paul Azinger has settled into Johnny Miller’s shoes with his savvy comments about players, pressure and shot-making.  And like Miller he does his homework. He did repeat a line over the weekend when he described two different players’ drives as “straighter than train smoke.”

Veterans like Dan Hicks, Roger Maltbie, Gary Koch and David Feherty all covered the action with a steady hand and a unobtrusive presence. Ex-caddies Jim “Bones” MacKay and John Wood have proven their worth with their on-course insight and occasional humor. I also enjoyed listening to Notah Begay. He possesses a near perfect tone, volume and clarity when describing the action. It’s as if he’s within a few feet of the players.

Steve Sands handled the post-round interviews very well. I especially liked Sands’ interview with DeChambleau on Saturday where he patiently asked the brawny belter about his round and then posed the question in many a viewer’s mind: How was he managing the gallery comments (heckles?) about “Brooksie” referring to the social media-fed controversy between DeChambleau and Brooks Kepka? When DeChambleau replied that he took it in stride and even took it “as a compliment.” Hicks later sheepishly described that reply as “an interesting spin on the matter.”

I was worried that NBC wasn’t using TopTracer technology enough early in the broadcast on Sunday. Several opening tee shots by the contenders lacked the TopTracer feature to see the line of flight.  But as the telecast went on and particularly in the final hour, the technology was readily employed.

All in all, it was a winning production and broadcast of the U.S Open by NBC Golf. How Fox Sports once covered this major is now a bad and fading dream.

4 Responses to “Remote Observations on the U.S. Open”