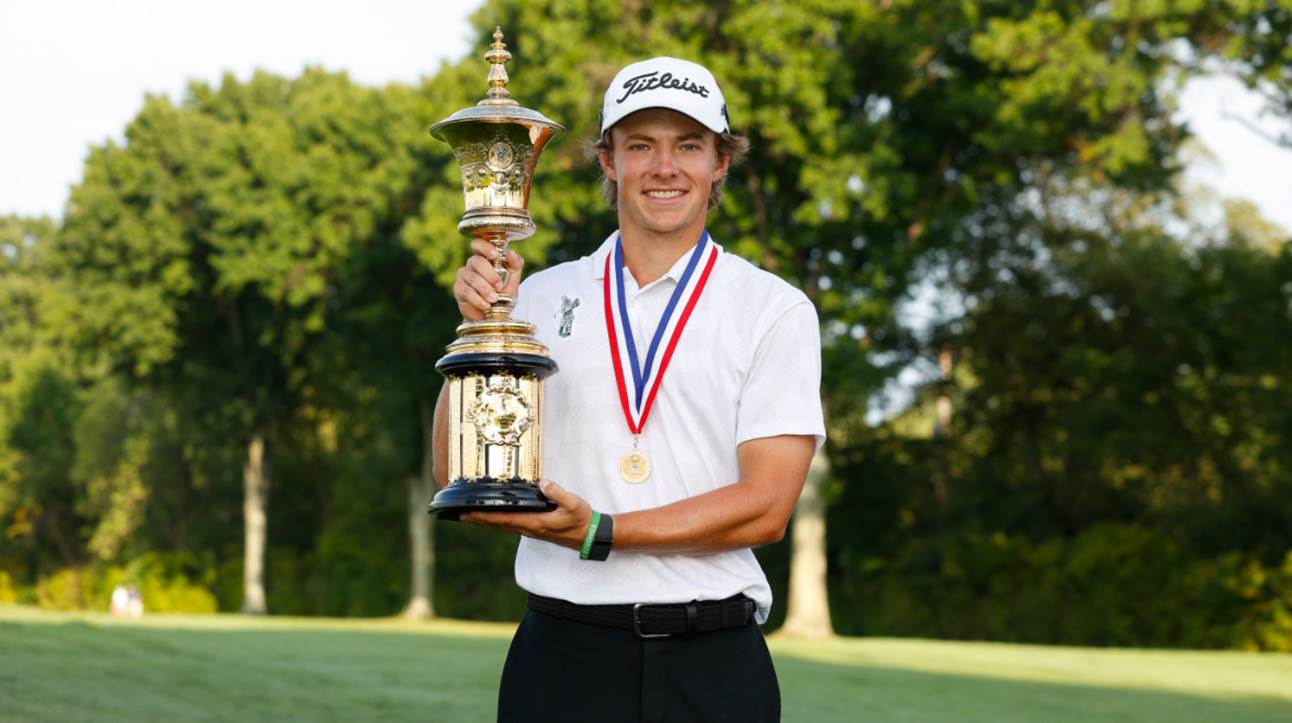 I’m not going out on a limb by saying the Michigan golf story of 2021 occurred last Sunday when the state’s James Piot claimed the U.S. Amateur Championship at Oakmont CC.

Piot, a fifth senior at Michigan State University and the recent winner of the 100th GAM Championship, became the first Michigan resident to win the most prestigious amateur title in all of golf. The legendary Chuck Kocsis lost in the finals of the 1956 Amateur to E. Harvie Ward. In 1936, the University of Michigan’s John Fischer won the Amateur but he was native of Cincinnati, Ohio.

With the title, Piot earns an automatic exemption into next year’s U.S. Open at The Country Club in Brookline, MA  and the Open Championship at St. Andrews. As is customary, he should be receiving an invitation to the 2022 Masters, as well. A special Masters perk beyond next year’s invitation is that past Amateur champions are annually invited and have special access to the tournament.  Four years ago, the Masters curtailed former Amateur and major champions, besides Masters champions, from playing in the Par 3 Contest and playing practice rounds. I bet Piot, 22, can live with it.

To many observers of Piot’s play over the past years, the victory at Oakmont was not a huge surprise. Last year, at Bandon Dunes, he was the no. 2 seed (shot 134!) going into match play and made it to the round of 32. He’s been a regular on the GAM’s Player of the Year list including topping the roster last year and runner-up the year before—being nipped by his Oakmont caddie and MSU assistant coach Dan Ellis. He’s already locked up Player of the Year honors for 2021.

I’ve had the good fortune to have watched and even been the walking official when Piot competed in the last two Michigan Amateurs. He demonstrated a bullet-proof game with accurate driving and confident putting. And he makes a lot of birdies. He reminds me of a young Rickie Fowler in many ways in terms of his boyish good looks, slight stature and remarkable overall game. Like Fowler, he’s naturally friendly and a gentleman on and off the course. He’s an easy guy to root for.

I won’t be surprised if he has eventual success on the PGA Tour. He has the stuff to make it. But all of that can wait as he reaps the just rewards—while remaining an amateur—in the year ahead.

For now, James Piot of Canton and M.S.U. is the pride of Michigan!

Last Sunday, I was nervously glued to the TV watching Piot battle it out with Austin Greaser in the 36-hole finals. The first 18 wasn’t televised but I kept tabs on it via the USGA website. It was encouraging to see Piot 1-up after the morning 18.

The second 18 was televised from 3 pm-4 pm on Golf Channel and then picked up by NBC at 4 pm.

With Piot 3-down after 27 holes, it was riveting TV to see him rally and go 2-up on the 17th hole, the driveable par-four. After NBC showed both players finding their tee shots in the bunker and Piot on the cusp of closing out the match, announcer Steve Burkowski suddenly informed viewers shortly before 6 pm that the telecast was leaving NBC for NBCsn, a cable channel and app. Many Michigan viewers, including me, missed his sole verbal alert about the change.  So at 6 pm, viewers were switched to local news with no lower screen crawl to find where the tournament was being shown. By the time I found it, Piot was accepting congratulations by a USGA committee person. The same was true for thousands of Michigan viewers. Ouch!

At first, I thought it was a local NBC affiliate decision to break away from the network coverage. But I soon found out it was a network decision to abruptly leave the coverage for NBCsn. I soon emailed Beth Major, the USGA’s senior director of communications, for an explanation about the gaffe. Unfortunately, being on vacation she wasn’t able to reply to my message until this Thursday.

Here’s part of her reply on the matter:

“With regard to Sunday’s U.S. Amateur championship final broadcast, we realize the viewer experience was not ideal. Our broadcast partner had to abruptly preempt coverage because of breaking news related to the situation in Afghanistan which unfortunately it made difficult to message quickly and effectively enough given the timing. We commit to working together to find solutions to avoid a similar situation occurring again.”

In short, blame it on the Taliban.