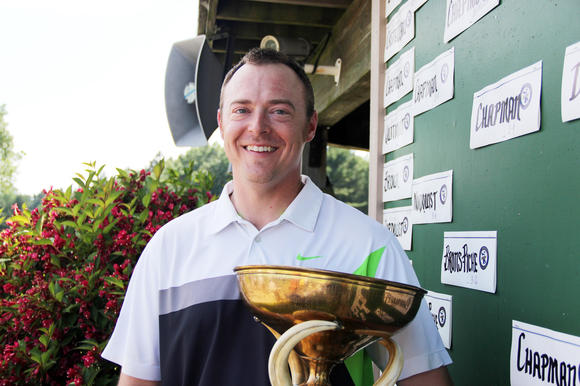 With a 20-foot birdie on the 18th green at Muskegon Country Club, Andrew Chapman beat Mike Ignasiak 1-up in the final match of the 102nd Michigan Amateur Championship conducted by the Golf Association of Michigan. The final round was a battle between two former University of Michigan lettermen as Chapman played golf for the Wolverines (1999-2002) while Ignasiak played baseball (1985-88) in Ann Arbor, later spending four seasons as a pitcher for the Milwaukee Brewers. A financial planner, Chapman, 33, lives in Traverse City with his wife Brooke and their seven-month-old twin boys, Graeme and Lincoln. A tired but overjoyed Chapman talked by phone with Terry Moore a few days following his climactic win.

Talk about the sheer grind of the Michigan Amateur?

I’ve never come close to playing that much golf in a week. I remember one time in college over a break, I wanted to play 36 holes a day for an entire week. I played 36 holes the first day and then ended up playing maybe 18 the next and that was it. It’s a whole different level at the Amateur. I played 169 holes of golf last week, beginning with ten holes of practice on Sunday afternoon when I arrived. When it ended on Saturday afternoon, I couldn’t have played another single hole. I was exhausted. I was lucky to have my birdie putt fall on the last hole because I didn’t have any more gas left to play extra holes. The fatigue showed itself in the final match with some of my loose ball-striking.

I noticed you didn’t have a caddie, following the lead of last year’s winner Drew Preston.

I had a couple buddies who offered to caddie if I made it to the finals. But since I hadn’t used one before then I didn’t want to screw up my routine. Early in the week I considered getting a local caddie and a few were recommended but it turned out that they were tied up with driver’s education and the like. So I decided to go the pull cart route. And yes I remember seeing Drew Preston last year carrying his own bag. I’m just glad I had a cart!

That was the first time I played with Tom. We’ve been on the same team before, say at the Fuller Cup, but we never played in the same group. He’s a terrific player. He had me three down at one point on the front nine and I was reeling. But then I noticed Andy Matthews (2001 Amateur Champion), my old college roommate at U-M, in the gallery and it gave me a boost. I won a couple holes and got back into the match. By just being there, Andy put a little wind in my sails.

Tom is a wonderful player and champion and if I win just half as many titles as he has it would be sensational. I just happened to hit the right shot at the right time to beat him in 21 holes. He easily could have won that match.

In your final match against Ignasiak, talk about the pivotal turning point on the 9th hole, the tricky par-four.

First, I want to say Mike is such a strong player and good friend. I couldn’t have asked for a better guy to spend the last four hours with. Looking back at the 9th, the best shot I hit on that hole was my third shot from behind the green. I couldn’t have hit my chip shot any better but because of the slope of the green it trickled off the green again. So I’m still off the green in three with another chip while Mike is on the green with a par putt. Somehow I managed to hole out for an unbelievable par to win the hole, after Mike missed his putt, and go 1-up in the match. It all comes to short game in these events and I surely leaned on mine the whole week.

How much have you worked on your short game?

It’s been a slog. I’ve worked so many hours on my putting and chipping. My teacher, Scott Hebert at Grand Traverse Resort, actually persuaded me to drop the belly putter I was using earlier in the year. We played together in the State Pro-Am at Boyne and in fact we got beat in an eight-hole playoff for the title by Dave Kendall and Casey Baker. Scott wanted me to go back to a conventional model and so after the Boyne tournament, I started using a new Ping Anser putter I had ordered earlier in the year through Casey. I had to trust the stroke and just go with it.

Elaborate on Scott Hebert’s importance for revamping your game?

We started from scratch. In 2010, I shot 92-80 at a 36-hole U.S. Amateur qualifier and afterwards I was as low as one could be as a competitive player. At the time, I hadn’t played tournament golf in many years and I was looking to get back into events. But I wasn’t feeling good about my swing, my mechanics didn’t hold up under pressure and I was nervous with my short game. Due to youth and some athleticism, I had been getting away with some swing faults but it wasn’t working out for my limited playing time. Essentially, I was lost.

I went to Scott and we first hit the basics: grip, alignment, set-up and my mental approach to the game.

It was a total rebuild of my swing, my mechanics and my confidence out on the course. He taught me how to be more neutral with my golf swing, to be able to cut the ball when I needed it and to have a go-to shot. Scott’s been an exceptional teacher and good friend. I’m really blessed to have such a smart and patient teacher who also lives and works in Traverse City and is available year-round. He’s been a game-changer.

In your final match, can you give some examples where you leaned on the go-to shot?

I played the par-threes really well during the week. I made a handful of birdies and felt very comfortable. Against Mike in the final match, I hit the perfect five-iron on the 15th hole and it ended up just short of the green and below the pin. That was an important shot and it led to me being 2-up. It seemed like most of the par-threes favored my baby fade, my go-to shot under the most pressure I’ve ever played.

Prior to the Amateur, what have been some of your golfing highlights?

Qualifying for match play last year at the USGA Mid-Amateur on two difficult golf courses was a big success. After trying to qualify for over 20 years to make it into a USGA national event, that was a breakthrough. My ball-striking was excellent. Even though I had eight 3-putts during the first two rounds of medal play I still easily advanced into match play. That tournament was key to how I looked at my game going into this year.

The Michigan Junior Amateur at The Quest in 1997 was my first big win. At Michigan in 2001 I won the Wolverine Spring Invitational in South Carolina where I used a putter that looked similar to the putter I used last week. That same putter look gave me positive deja vu flashbacks on those fast Muskegon greens. But nothing compares to winning the Michigan Amateur.

What’s your assessment of Muskegon CC?

I felt at home because I’ve played there before on several fall golf trips with buddies from Traverse City including a late close friend—Mike Teter—who always considered Muskegon CC a special place. I thought about him a lot last week. So winning last week at Muskegon made a special place even better. It’s a wonderful golf course.

Please discuss your upbringing in the game.

My parents got me involved in golf early on with the fabulous Flint Junior Golf program. On Monday mornings, my mom would drive my brother and me to the program and we would play all of the great Flint area courses. I have so many fond memories of that program and learning the game. But the golf bug really bit us when my parents joined Atlas Valley Country Club in Flint. It had a six-hole mini-course we could play all-day, just an ideal place. And there are some similarities between Muskegon and Atlas Valley. Both have undulating, lightning-fast greens and both have holes where it’s tight off the tee.

It was great growing up at Atlas Valley surrounded by people who cared about the game and about nurturing junior golfers. I was the young whippersnapper back then playing in the skins game with older members. Funny but now I see the sons of those same members competing with me now in state events. It’s come full circle.