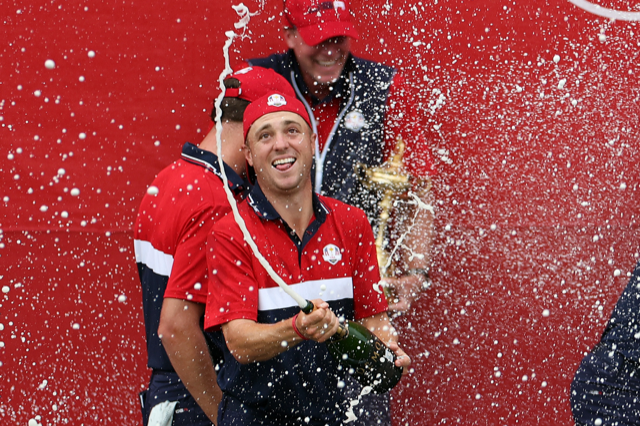 Winning says it all

Although I was credentialed for this year’s Ryder Cup I opted for remote media access this time around. Previously, I had covered seven Ryder Cups in person, the first being in 1987 at Muirfield Village in Ohio when the European team vanquished the American squad on American soil.

So like many of you I watched the exciting proceedings on television. It’s not the same as being there but you can’t beat the extensive coverage. And it’s easy on the legs.

Anyway, here are my thoughts and observations from last weekend.

Give credit to Steve Stricker, his co-captains and the PGA of America staffers for correctly calculating the sort of player best suited for Whistling Straits’ big and demanding layout. His picks of Tony Finau, Xander Schauffele, Jordan Spieth, Harris English, Daniel Berger and Scottie Scheffler were well-suited for the venue and performed well. Their World Rankings ranged from 5 to 21 while the average age of the team was a youthful 26.4.

Meanwhile the European team banked its hopes on experience. Its average age was 34.6.

Pete Dye’s and Herb Kohler’s bold creation rose to the occasion as it did with three previous PGA Championships and a U.S. Senior Open. It had length, wind, bunkers, and penalty areas to challenge the best players to deliver clutch shotmaking and putting. And Lake Michigan as a backdrop looked sensational.

Fortunately, the weather was ideal with just a sprinkle of rain and no excessive winds to make it    playable all weekend.

The last three holes in particular delivered high drama in the close matches.

Our grandchildren in future telecasts will be seeing replays of Jordan Spieth’s cliffside chip shot out of the rough on 17 soaring into the sky and close to the hole while Jordan somehow raced down the hill, stopping just short of running or falling into the lake.

What wasn’t brought up by announcers in subsequent replays was that Spieth’s partner Justin Thomas missed that putt with the Europeans winning the hole and the match.

The other memorable shot was Bryson DeChambleau driving the par-four first hole and then making the putt for eagle on Sunday.

As someone lucky enough to see world-class players’ game up close both inside and outside the gallery ropes, I’m continually amazed at their power and finesse. But in the Ryder Cups I’m struck how their chipping and bunker play are so acute. As Tom Watson once told me in an interview at Harbor Shores during the Senior PGA, the reason you see so many hole-outs is because, yes, the players are all trying to make it! Not close but hole out. Their touch and club face control is astounding as is their willpower and concentration.

This element of the competition is something the Europeans usually thrive on. This time the pairings for the USA team demonstrated a like-mindedness and comfort zone between the two players that made them formidable.

I liked how Stricker insisted on less dramatics, no outside speeches and fewer pep talks in the meeting room. The tone of just sticking to business and a more relaxed team fit perfectly with how the soft-spoken Stricker wanted to lead his team.

As expected, NBC and the Golf Channel exceeded expectations for coverage. An experienced productions crew and knowledgeable on-air commentators made the wall-to-wall viewing time (sorry, dear) fly by.

There were only a few quibbles like not using TopTracer to track the ball path for every tee shot on Sunday, particularly at the par-three 12th hole. But generally speaking, there wasn’t much to complain about. Plus I muted the competing commercials during the “playing through” segments.

Wasn’t it refreshing not having Tiger Woods as an Assistant Captain for Stricker? I wish him well in his recovery but I prefer not to have his presence demanding distracting interviews and camera shots. Michael Jordan and his cigar-smoking crony Ahmad Rashad were bad enough. To be fair, I don’t believe Jordan was ever interviewed.

Besides Rory Mcllroy’s revealing and emotional interview following his singles win on Sunday, the other must-see interview was the final media room presence of the USA team. Smoking cigars and sipping some adult beverages, the members of the triumphant squad offered up a raucous and highly entertaining wrap-up to the Ryder Cup.

Justin Thomas wickedly insisted that Brooks Koepka and Bryson DeChambleau hug each other around the Ryder Cup was a priceless cap-off. And they did! Winning and a team spirit can resolve a lot of piddling issues.