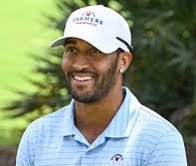 This weekend I’m hoping to see Willie Mack III playing at Riviera CC at the Genesis Invitational. The Michigan native is competing in the tournament thanks to receiving the Charlie Sifford Exemption given to a deserving minority golfer as chosen by the Tiger Woods Foundation.

Helen Ross of the PGA Tour penned a fine story on Monday about the 32-year-old Mack,  tracing his roots growing up in Michigan. In it, Mack talked about his days playing with his dad in Flint at such public courses as Swartz Creek and Pierce Park. He also remembered taking his first formal golf lessons at the age of 12 with Michigan Golf Hall of Famer pro Jack Seltzer. With lots of practice and determination Mack developed into an accomplished collegiate golfer, winning 11 times, at Florida’s Bethune-Cookman.

My first encounter with Mack was at the 2011 Michigan Amateur at Boyne Highlands. In fact, I covered his afternoon contest in the first day of match play. Mack prevailed in the dying light on the third extra hole. A gifted putter, he poured in the winning putt in near darkness which propelled him into the coveted Sweet Sixteen bracket. There was something about Mack’s grit that was compelling. Two days later he claimed the title, becoming the first African-American to be a Michigan Amateur champion. Afterwards, he was quoted: “All of this feels exciting. My aim is to be best player that I can be.”

As Ross reported, Mack has struggled for years on the various mini-tours even though he has won several times. But currently, he’s the leading money winner on Florida Professional Golf Tour and has a sponsor’s arrangement with Farmers Insurance. He has played in one Korn Ferry tournament and another three on PGA TOUR Latinoamerica. And two weeks ago, he was given an alternate spot in the Farmers Championship at Torrey Pines when his good friend Kamaui Johnson had to withdraw when he tested positive for COVID-19.

Unfortunately, Mack missed the cut. Afterwards, he discovered his driver had a crack in it, contributing to him only hitting four fairways in two days.

With a new driver in his bag and an ever positive outlook, Mack aims to make the cut and compete on the weekend. There are plenty of people in Michigan urging him on.