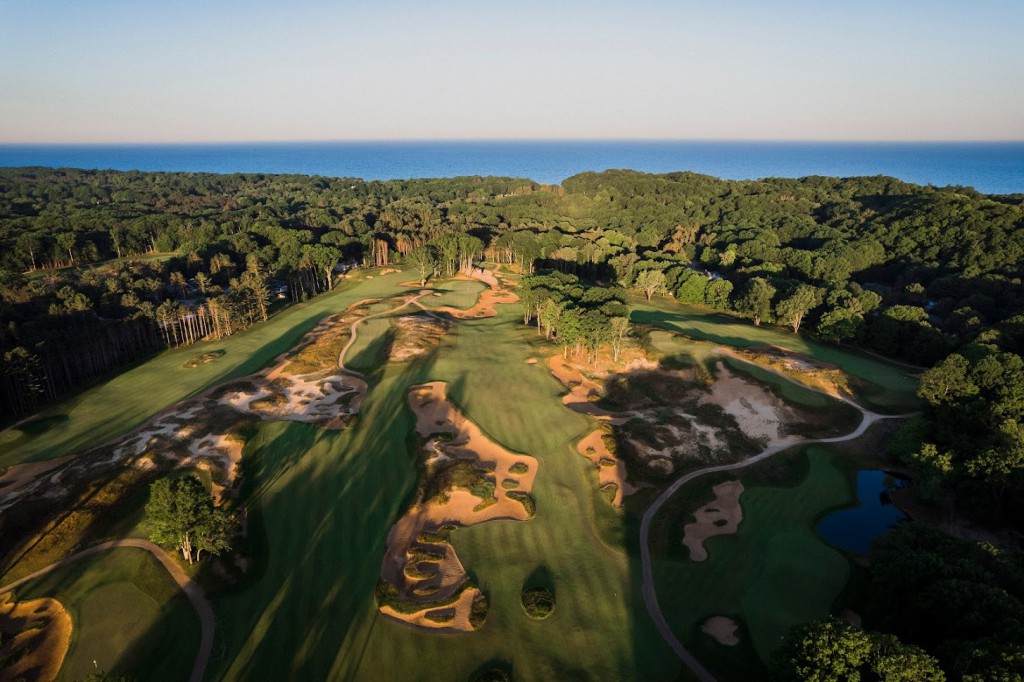 (Grand Haven, MI) It’s been over a year since I last played American Dunes, the well-publicized design by Jack Nicklaus over the property once occupied by Grand Haven GC. I played it twice in the quiet and official openings in 2020 and early 2021 and was duly impressed. The exposed sand dunes and massive bunkering rendered a “wow factor” over the once parkland public golf course. When I was growing up, Grand Haven was a “destination” course in Michigan that required accuracy off the tee with tree-lined fairways on virtually every hole.

‘As background, I played the course with three other golfers, two who were first-timers. As expected, they were impressed with the underlying storyline and patriotic mission of American Dunes. Lt. Col. Dan Rooney has dedicated the course to the Folds of Honor, a non profit endeavor which provides scholarships to the family of fallen military service personnel.  The presentation in memorials, plaques, videos and photographs of this cause are thoughtfully done.

In Michigan, Nicklaus is best remembered for his penal designs at The Bear in Traverse City and Bay Harbor in Benton Harbor. American Dunes is much more accommodating and friendly than those tracks. As Nicklaus remarked at the opening, “Those courses were aimed at hosting professional tournaments.” Rooney and Nicklaus wanted a layout more suitable to public play, with open fronts to greens and less movement in the greens.

And by and large, American Dunes delivers a less demanding golf experience although it’s far from easy. The myriad bunkers, waste areas and some elevated green complexes require one’s “full attention” as they say on the tournament telecasts.

It’s also a walkable layout, a trait I always appreciate although most customers take a cart. But the option is there and I’ve done it twice and really relished it. Our foursome played two different sets of tees, the Freedom tees at 6131 yards and a hybrid of the Valor/Freedom at 6381. It was a smart choice and made it a better day. Be sure to ask the starter about the hybrid option.

Our group liked how the course opened up on the opening nine with the testing downhill par-three fourth hole. Usually into the wind, the hole requires a well-struck shot to find the green, guarded by a large bunker and run-off areas.

Likewise, on the back nine, the second shot of the shortish par-four 11th hole reveals the breadth and reach of the dunes-and-bunkered landscape.

American Dunes really doesn’t have a weak or poor hole. Some may quibble about the starting hole with its somewhat unkempt look and unsightly power lines, but at least it gets play moving, a prerequisite in my playbook.

One of my playing partners thinks highly of the reachable par-five 18th hole, essentially the old 9th hole at Grand Haven. At 500 yards, he hit drive and a three-iron to one foot past the flagstick, just missing an albatross but still a kick-in eagle.

Afterwards in the bar, our group talked about the round and all readily agreed they’d love to play it again. In particular, the course conditions and greens were excellent with putting surfaces  stimping at 11. Players who frequent courses of the ilk of American Dunes want and expect slick greens. There were some comments on the softness of the bunker sand, which proved troublesome. Firmer would be much better. The Nicklaus team says they will firm up with watering so that’s a work in progress. Lies in waste areas can be improved via a local rule. Overall, some of the course’s apparent difficulty will ebb as one becomes more familiar with it.

There were some shared concerns with the intersection of the par-3 15th hole and the par-4 16th hole. The green site of the former and the teeing area of the latter pose a risky congestion. The cart path on the 15th leads directly toward the tee of the next hole. Unfortunately, an alternate cart path on the other side of the green lacks room to avoid this situation.

There was also consensus that the tough 16th hole, deservedly the no. 1 index hole, would be a better served with a softer green, one that would accept and collect the required long iron or fairway metal into the green.

Considering the many changes taken at Nicklaus’s beloved Muirfield Village and even at Augusta National GC, it’s hoped Nicklaus and Rooney remain open to tweaking certain holes to make it even more inviting and playable.

Opening the lid on the suggestion box for American Dunes, we did wonder why only a single tee marker per tee is used. Course officials say they wanted to be different. But It seemed strange and it actually doesn’t conform to the USGA definition of a teeing area where two tee markers are required. We received no alert on this oddity from the starter.

And as a smaller suggestion, the nice practice area needs a bucket of water and towel to help with cleaning clubs. And since the range is far from the clubhouse, a clock would be helpful to keep players on schedule.

But the big takeaway about American Dunes remains upbeat and favorable. I’m particularly happy knowing a course the quality of American Dunes is less than an hour’s drive away.