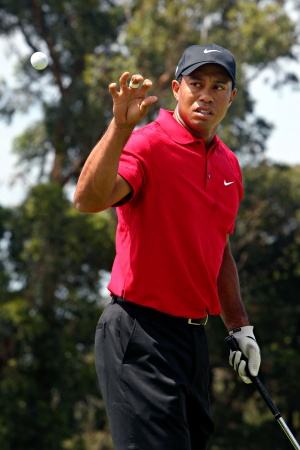 For the second day running at The Masters, a late rally has stolen the show from Rory McIlroy and softened the limelight on the Ulsterman’s impressive performance. Yesterday, it was Spain’s Alvaro Quiroz who made the reporters re-write the stories they had already prepared for printing. Today, it was the familiar figure of Tiger Woods who produced roars all over Augusta National with a 66.

Tiger’s charge started on the par-5 eighth hole, where he begun a three-hole birdie run. He proceeded to complete the back nine in 31, finishing with a birdie on the final hole, set up by a beautifully crafted fade around the tall pines flanking the right side of the fairway.

At seven under par, Woods now trails McIlroy by three shots, with Australian Jason Day securing a spot in the final group of tomorrow’s third round with the day’s best round – an astonishing 8-under 64 on a course that was set up more difficult than on Thursday. Greens were firmer and hole locations more exacting.

McIlroy’s putter went cold on the back nine and the 21-year old spent the early evening on the practice green hoping to bring his putting to par with his already flawless iron play. McIlroy may benefit from the attention that his challengers have generated.

Trying to get a first taste of major championship glory, McIlroy potentially faces a challenge from the healing Tiger Woods who has seen it all, but faces demons beyond the conventional. Tomorrow will most likely determine if Woods is really back or not.

Read all of the great stories on The Masters by TheAPosition.com writers. We’ve created a directory to all of them here.