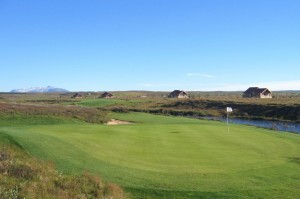 No irrigation sprinklers are in place on the fescue greens at Geysir Golf Club. Yet they have been praised for their quality.

How much does it cost to build a golf course? This is the million dollar question – or is it? Every golf course architect has been asked this often enough to establish some kind of an auto-reply – a patent answer that comes in handy in social gatherings or in the meeting room.

Clients differ in their knowledge of the game and their background. Those who have little or no idea of the intricacies of this fascinating game want to have an understanding or to be assured that they are getting a first-class product. They perhaps feel uneasy about the very thing that makes golf so unique: the fact that no two golf courses are alike, or should not be alike. The process would, in many ways, be easier for them if a golf course had predetermined dimensions such as an Olympic swimming pool, in which case very specific details need to be fulfilled.

Also, clients want to know how their golf course can achieve a so-called ‘international standard’. This term is not dissimilar from the common, yet tedious label: ‘championship golf course’. This, they ask, while laboring under the impression that golf courses are likely to have some kind of a star rating like hotels and restaurants, and that certain standards are to be followed in their construction. They are often baffled to hear my reply, because there are absolutely no standards. Nothing is written in stone, or is it?

If there is a standard, I believe most will agree that a golf course is required to have eighteen holes so it may gain acknowledgement among keen and ‘knowing’ golfers. Still, it is important to stress that countless golf courses throughout the world with fewer holes, mostly nine-hole courses, remain immensely popular.

There is a key positive point that is becoming increasingly helpful. Golf courses that are less expensive to build are gaining more recognition among the world’s best. In this regard, Sand Hills in Nebraska has been a huge contributor.

In the summer of 2003, I was contacted by a small family that to this day runs a guesthouse across the narrow winding country road from The Great Geysir, the world-renowned geothermal spring in Haukadalur, South Iceland. They wanted to build a nine-hole golf course on their twenty-hectare property.

The size and shape of the property provided little flexibility in routing the golf course. Opting for an ‘out’ and ‘in’ layout – a la The Old Course, St. Andrews – was necessary. The existing vegetation, consisting of small-scale moss mounds and bumpy terrain covered with heather, wildflowers and shrubs, gave the property a great deal of character. The dominance of moss was a challenge, since it is prone to ‘swallow’ golf balls straying off-track and beyond the limits of the fairways and adjacent semi-rough.

Since we were focused on keeping construction and running costs to a minimum, we had to flirt with the fine line between playability and difficulty. A nine-hole par-3 course was discussed, but this option was less appealing to the owners. After identifying attractive green sites that could be linked together with the guest house at the start and finish of the round, we proceeded to clear the existing vegetation in the playing corridors, giving nature the benefit of doubt wherever it arose.

We were hopeful that with each round played, the moss content in the native rough would gradually decrease, or that it would compact and firm up under the feet of golfers. This would increase the player’s chance of finding his/her golf ball. Now, in the fourth third playing season after opening, this seems to be coming to fruition. The severity of penalty resulting from an inaccurate shot is gradually decreasing, allowing us to keep grassed areas to a minimum. The existing vegetation needs little maintenance as long as fertilizer does not filter into it. The result is a golf course that can be mown by one person in a single day using a ride-on mower.

‘The result is a golf course that can be mown by one person in a single day using a ride-on mower.’

Our logic was that it was better to remove too little existing vegetation than too much. This way we could enjoy the benefit of seeing how the course played, and then widen the fairways if necessary. Doing it the other way around would have been much more expensive.

The biggest cost factor in the construction of Geysir Golf Club was in the earthworks needed to prepare the tees, of which there are three sets per hole, and greens. When the design relies almost entirely on existing topography, cost items such as irrigation, drainage and the acquisition of the right materials for the construction of tees and greens usually rank among the highest.

In Northern Europe, fescues are among the most suitable golf turf grass species. Their dominance in the sward over other species is best encourage by keeping fertility and irrigation at modest levels. An automatic irrigation system, therefore, is not vital for turf health as long as traffic does not exceed a certain threshold. If anything, the presence of an automatic irrigation system increases the risk of overwatering; although it is accepted that it will help germination and the ‘grow-in’ phase tremendously.

At Geysir, no automatic sprinklers were installed. We only established pipe infrastructure that could deliver water to a hose point near each green. In most cases we relied on the use of a mobile petrol-powered pump to deliver water directly from the two rivers – running through the course – to a nearby green. This is only used in extreme situations. Still, during the dry summer of 2008, this was never used. One can say that making irrigation ‘too much bother’ – under low to moderate foot traffic – is the way to successfully grow fescues.

When designing a drainage system for Icelandic golf courses on reasonably porous soils, the emphasis should be on getting rid of rain and melting ice and snow during winter, rather than rain during the summer, since it simply does not come in the same volumes as it does further south in the world. Since the ground is usually frozen, this winter drainage needs to be taken care of by using inlets or catch basins of some sort.

However, any pipe infrastructure connecting these inlets and channeling water to a desirable exit or storage point is expensive. At Geysir, we found that there was a layer of fine gravel and coarse sand at a depth of two to six metres below the surface. Instead of installing pipes, we drilled approximately twenty-five holes extending into this layer, insulating them with PVC-pipe and backfilling with gravel. This is a technique that we are repeating on at least one project in Eastern Europe, where winters are not unlike what global warming seems to be bringing to Iceland in the off-season.

The most important attribute of any golf course is the quality of its greens. Therefore, the main focus at Geysir was on the construction of the greens. It was clear that building greens strictly to the USGA specification would dwarf other cost items in the project. None of the materials we ended up using conformed to the USGA specifications. One the adjacent property we found sand that had good enough particle size distribution and other key attributes for effective grass growth, given the anticipated traffic volume.

At Geysir, there is no herringbone drainage pattern in the compacted soil base underneath. The construction profile of the greens is generous, approximately 700 mm deep. This is a depth we determined necessary to get below the ‘frost-line’, namely, the depth to which frost is likely to reach in the ground during winter. Throughout Iceland, winter heaving – the uneven lifting of the surface due to frost – is common. The gravel, which we found on-site, was poured into the green cavity to a thickness of 400 millimetres. Then, to prevent the finer particles in the root zone from filtering into the gravel, an intermediate layer was used. This we took from left-over material from nearby roadworks.

The greens were then established by seeding. Most importantly, this method of greens construction has given the client a medium to grow in and manage greens to a high standard. The Geysir greens have received special mention and praise from a large portion of those who have played the course.

Acceptance of the occasional ‘blind’ shot

The topography and terrain of the property seemed to lend itself to the holes having the following par sequence: five; five; four; four; three; four; three; four; five – a par of thirty-seven and, therefore, seventy-four over eighteen holes. Attempting to reach a more conventional layout would most likely have resulted in extensive earthworks and longer walks from green to tee. A decision was also made to accept the two ‘blind’ shots that the routing included; the more significant of the two being the drive on the eighth hole. Interestingly, feedback suggests that this tee-shot has become the highlight of the round for many players.

In the more detailed design, we made sure all grassed areas could be cut with a ride-on mower. Also, we decided to grass all walkways. If they got worn out, we would introduce a suitable substitute. This is a positive problem occurring from increased traffic. If this exceeds levels tolerated by the grass plant, chances are that enough funds have been raised through sold green fees to address the issue and install a different path surface. The total number of sand bunkers on the course is less than an average of one-per-hole: seven!

At Geysir, we weren’t reinventing the wheel, and nobody involved there will claim to have done so. We had many things going our way on this project; what we did on-site would be virtually impossible in many climates. Still, the bottom line is that we built a nine-hole golf course that continues to increase in popularity – and we did it for amounts lower than the price of an average home – excluding land costs. We did it by keeping our eyes, ears and minds open.

Fescue to the rescue

Among all the factors that contributed to the cost savings in the construction of the Geysir Golf Club, the climate, perhaps, is the dominant one. The ability to grow an successfully manage fescues was a key element in our quest to keep the expenditure manageable. In northern latitudes, more experts are arriving at the conclusion that fine fescues are the future. This choice of species and cultivars is part of their recommended approach; namely, to rely mostly on cultural practices in an effort to control weeds and disease, instead of the application of chemicals.

This prompts one to wonder if northern latitudes – including the coastlines of the North Atlantic and other maritime climates in similar latitudes – have potential to become the golfer’s ‘paradise’ of the twenty-first century. Could it become one of few places on Earth where the stand-alone golf course will be economically viable? Applying the approach outlined in this case-study, where applicable – and assuming the greater creative freedom and more flexible land use involved in the design of such a facility – it is not unreasonable to conclude that this region will have increased chances to attract a lot more players in the future, both domestic players and visitors from abroad.