Believe it or not, there is more to life on a golf trip than golf. 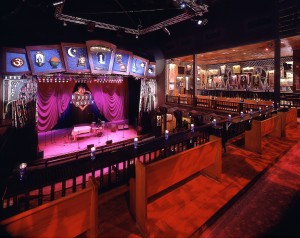 After golf in Myrtle Beach, you can enjoy great good and tunes at the popular House of Blues.

For many guys, the idea of playing 36 holes a day in Myrtle Beach sounds like a prescription for golf nirvana. And it is a trip when you’ve been golf starved.

Even if you do cram as much golf as you can when you’re in Myrtle Beach, it does get dark eventually. Nor can you stop it from raining from time to time. It is an outdoor game after all.

In years past, Myrtle Beach used to be a one-trick-golf pony. Before or after golf, or instead of golf, your options were usually limited to drinking, playing cards, going to a movie, buying khaki slacks… or drinking.

Now, you can get all the golf you want—after all, there’s more than 100 golf courses spread over about 60 miles known as the Grand Strand—and enjoy great restaurants, nightclubs that rock and others that samba, a wide array of shopping, a bevy of shows and entertainment, amusements

“The Myrtle Beach Area has evolved into a destination that offers something for everyone, from 60 miles of beautiful sandy beaches, to a wide range of accommodations, amenities, amusements, entertainment, shopping and a plethora of activities for everyone, including world-class golf. There’s so much more to do and see to complement golf,” says Kimberly Hartley of the Myrtle Beach Area Convention and Visitors’ Bureau.

The evolution of Myrtle Beach includes how you get there. In the past, a trip to Myrtle Beach meant hop scotching around all day on planes, or a very long drive cooped up in close proximity with some guys.

For folks in Western New York or Southern Ontario, you can fly direct to Myrtle Beach on Direct Air out of Niagara Falls, N.Y., which features Niagara Falls International Airport, likely the only international airport in the world which services one airline and provides free parking.

And now you can get on a plane in downtown Toronto and the next stop is Myrtle Beach, South Carolina. This modern miracle is brought to you by Porter Airlines which is flying don’t-stop-till-you-pass-go-direct flights to golf mecca from February 28 to May 30 with departures on Thursdays and Sundays. One-way fares start at $179. Connections are available in Toronto from Ottawa, Montreal, Quebec City and Thunder Bay.

“The announcement of Porter’s direct flight to Myrtle Beach was significant for the state and travelers from Central Canada, because it’s now so much easier to get there,” said Ian Cruickshank, travel columnist for The Toronto Star daily newspaper.

“I’ve been lucky enough to tee it up around the globe, from China to Ireland but one of my new favourites is Myrtle Beach. It’s got everything—some of the finest public layouts in the U.S., a night life that ranges from old fashioned fun to sophisticated dining, and the best family beach on the eastern seaboard,” Cruickshank says.

The soundtrack for the majority of golfers in Myrtle Beach today is not bagpipes or big band music. Golfers can rock out, eat, drink and rock out at the Hard Rock Café, which attracts a great mix of locals and visitors of all ages.

One of the greatest trends in Myrtle Beach has been the increasing number of venues with live music or shows. At the House of Blues, great beer and food perfectly complements an eclectic mix of quality musicians, including jazz, rock, roots and, of course, blues. Norah Jones, Hootie & The Blowfish and Chris Isaak have graced the HOB stage in Myrtle Beach.

For a variety of music, dance and comedy, there’s The Carolina Opry Presented by Calvin Gilmore. The venue’s specialty on select nights is Good Vibrations, in which the Opry cast turns out hits from the ‘60s, ‘70s and ‘80s. Gilmour’s Legends Concert pays tribute to entertainers such as Elvis, Frank, and Barbara.

Especially for the family, there’s:

There are a number of fun festivals, the most notable for folks north of the border is the Canadian-American Days Festival in early March. For loading up on gifts for the folks who had to stay home, there are major shopping centres such as Barefoot Landing, Broadway at the Beach, Marsh Walk and more.

And if you find yourself with some energy to spare after an evening out, there’s always lighted golf at the Cane Patch.  Which is something good to think about along with your Myrtle Beach tee times.