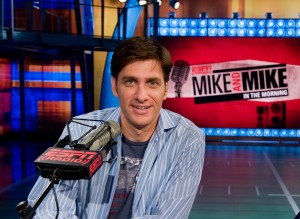 Mike Greenberg on the ESPN set.

Mike Greenberg, a resident of Fairfield County, Ct., and co-host along with Mike Golic of the ESPN Radio and ESPN2 sports talk show, “Mike and Mike in the Morning,” is an avid golfer. An accomplished sports journalist, Greenberg joined ESPN in 1996 and has served in a variety of roles with the network, including as an anchor on SportsCenter. He and Golic have teamed for the past 11 years on their popular talk show, which airs to 96 million homes Monday through Friday between 7 and 10 a.m. He and Golic penned a book titled “Mike and Mike’s Rules for Sports and Life,” which hit the stands last April. I had a chance to talk to him recently about his love for golf.

Greenberg: I play at minimum of four days a week, either going to the range to hit balls or playing.

Best round ever and where?

Greenberg: 82 at Lake Shore Country Club near Chicago. I was playing with my brother-in-law, who is a member there. And I shot an 83 at my home course. I was just going to play nine holes but I counted up my score after nine and it was a 38. I had to keep going and I was thinking about what I was going to say the next day on the air when I broke my own record. Of course I shot a 45 on the back side and finished with an 83.

When did you take up the game?

Greenberg: I didn’t take up the game until my mid-20’s. My father is a great father but he didn’t encourage me to play golf. He thought boys should be playing more physical sports like baseball and basketball. When I finally took up the game I was horrible and developed many bad habits because I was self taught. Two summers ago I was going to give the game up.

What made you change your mind?

Greenberg: Finding the right teacher. I’ve been working with Dan Tzvansis, director of instruction at Rolling Hills, and I have had enormous improvement in the last 12 months. I used to practice like crazy but Dan told me I was practicing bad habits. Dan is an amazing teacher.

What did Dan see in your swing?

Greenberg: He came up to me on the range and said that I didn’t look happy. He said that he could help me but that I was going to have to put the work in. It was a total change and we started with my grip. In a few months I went from a 19.6 to a 16.4 and now I’m a 12.3 a year later. My goal is to be a single-digit handicapper. I owe it all to Dan.

Greenberg: I never had one, although I thought I did. It was dusk and I was playing the third hole at Rolling Hills which plays uphill around 192 yards. I hit a rescue club and it was right at the flag. I couldn’t see the ball and as I’m walking up to the green I’m thinking I made a hole in one. Then I see the ball seven feet behind the flagstick. Of course, I missed the birdie putt.

How about a favorite course anywhere?

Greenberg: I’ve played several courses that host or have hosted PGA Tour events, like Cog Hill, Butler National, Westchester Country Club and, of course, the TPC in Cromwell. They are all great.

What is the best thing about your golf game?

Greenberg: Anyone who plays with me knows that for no good reason I have good touch around the greens, not on the greens, around the greens. I’ve got a Cleveland 60-degree wedge that I can hit flop shots anywhere with. Of course, I may be so good at it because I miss so many greens and I get a lot of practice.

Greenberg: No doubt, my iron play.  I’m getting off the tee much better and my putting is streaky. But I can be 145 yards from the green in the middle of the fairway and miss the green left or right. It’s very frustrating.

Why do you enjoy the game?

Greenberg: There’s something about the remoteness of a golf course. The green grass, the fresh air, the serenity of it all. The second reason why I love the game is the companionship of friends and playing partners. I don’t like to talk about business on the golf course, just golf and what we are working on with our swings. Actually, because of my hours and free time in the afternoon, I find myself playing lots of golf by myself, which I enjoy.

How about a favorite moment on a golf course?

Greenberg: No competition, when I was one up after one hole on Ben Curtis during a pro-am at the Shell Houston Open. We went to first tee in a golf cart straight from doing the show live and raced to make our tee time. There’s a pretty big gallery following us, which I’m totally unaccustomed to. I was so nervous I didn’t know what to do. Curtis hits his tee ball from about 80 yards behind our tee and I hit mine down the right side to about the same distance from the hole. We both miss the green. He chips up to 10 feet, I chip to six. He misses his putt and I make mine and I’m even par after one and he’s one-over. The kid holding the scoreboard walking with us has me even par, one ahead of Curtis. He winds up shooting a 71 and I shoot something like an 89. But for one hole I was ahead of a British Open winner.

What’s your most embarrassing moment on a golf course?

Greenberg: Too many to name only one or two!

Your dream foursome of pro golfers?

Greenberg: Ben Hogan, I’m fascinated with him, Tiger Woods and then it would be tough picking a fourth. I guess Jack Nicklaus, but it could be Arnold Palmer or Phil Mickelson.

Your dream foursome other than pro golfers?

Greenberg: I’ve done that and it’s no thrill, believe me.

Who is your favorite professional golfer and why?

Greenberg: I admire all pro golfers more than any other athletes. Golf is the toughest sport because the adversary is you. I could take a bunch of single-digit handicappers, give them a 10-foot, slopping putt on one of the greens at Augusta to win a million dollars and I guarantee you no one could do it.

What must the game do to remain vital?

Greenberg: Two sports are ingrained in the American psyche, football and baseball. All other sports, to some degree, are trying to figure it out. What the NBA and David Stern have done is promote their stars. Golf has risen to a high level of popularity because of Tiger Woods, and it will be challenge for golf in the new Tiger and post-Tiger eras to develop new stars. It can’t always be about one guy that casual fans are interested in.