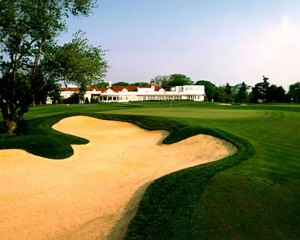 Okay, it’s not Vegas, but Atlantic City has its own cache among jet setters and gamblers. For Easterners, AC is an easily doable alternative to flying out to the Nevada desert, as the New Jersey hotspot is just a two to four hour drive from Northeast metropolitan areas.

And, hey, AC has lots of great golf, several of the best courses opening up within the last decade or so with tourism gurus and local civic leaders trying to parlay golf, gaming and entertainment into a big winner. It hasn’t really worked out that way, as most casinos haven’t come on board to promote the area’s golf, perhaps fearful of anything that will take the paying customer away from the slots, black jack tables and roulette wheels.

Still, you can build a fun stay in AC around gaming and golf. There are several outfits that will customize a stay and play deal, all for pretty reasonable prices. Late summer and fall are good times to check out AC, as the crowds have dwindled a bit and the courses are usually in nice shape.

I’ve had the good fortune to have checked out most of the area’s golf courses and there are some petty sweet tracks here. In all there are 30 courses, some storied, some new, in the area. Here’s the skinny on some of my favorites.

Once, you couldn’t get on Atlantic City Country Club without an invite from a member or spending your way on as a high roller. But that all changed when the club was purchased from the Fraser family by Park Place Entertainment. Tom Doak supervised a complete renovation of the layout, while maintaining the course’s tradition of fast and firm greens and views of the Atlantic City skyline that is located only minutes away.

Atlantic City Country Club is one sweet track with tons of history. Founded in 1897, it enjoys the distinction of being the acknowledged “Birthplace of the Birdie” and also where the term “Eagle” was coined…they will tell you. Six USGA championships have been played at the club. In fact, the club’s professional at the time, Johnny J. McDermott, became the first American to win the USGA Championship in 1911 at the tender age of 19.

John Reid, Willie Park, Jr., Howard C. Toomey and William S. Flynn, in addition to Doak, laid hands to ACCC’s design. Only 6,577 yards from the tips, the slope is 128 with a course rating of 72 (par is 70), which gives you an indication of the demands the track has on proper placement off the tees and short game management on and around the difficult greens.

When I played ACCC, the wind was blowing hard off the ocean, as it often does here, and it was all I could do to find the rather narrow fairways and small greens. But the weather didn’t lessen my enjoyment of this classic. There really is a tangible sense of timelessness here and the routing holds up to today’s equipment.

I’ve had the pleasure of staying at Seaview Golf Resort, a massive 297-room complex in Absecon that features two championship golf courses–The Bay and Pines courses. The links-style Bay Course hosted the 1942 PGA won by Sam Snead and was designed by Donald Ross.

The Bay Course is loaded with superb holes and, like Atlantic City Country Club, offers cool views of the Atlantic City skyline across the bay. Several of the holes either end or start near the bay or run along it. While not overly long at 6,247 yards from the tips, the course is nonetheless is a good test of course management and proper club selection. Tall fescue grasses line many of the fairways during the warm months and there are ample bunkers and occasional wetlands or water to catch the wayward shot.

The brainchild of the design team of Toomey and Flynn, the Pines Course was carved from woodlands surrounding the resort and features tight fairways and well-protected landing areas. Longer (6,731 yards from the tips) than the Bay Course, the Pines demands precision off the tee and steady approaches to the ample greens. Three of the four par-fives can be reached in two by big hitters, but there are five par-fours–including the monstrous 468-yard 17th–that play over 400 yards from the tips. The back side features three par-threes, including back-to-back short holes on 15 and 16, both of which measure well over 200 yards.

When you are done with golf, make sure you hang out in the resort’s tap room located in the hotel. It’s got a wonderful feel to it and lots of photos showing the greats that have visited the resort and played the courses.

OK, how many times in your life have you had the opportunity to hit a drive over a grapevine that’s part of a working vineyard? Probably not ever unless you’ve been to The Golf Course at Renault in Egg Harbor City, a piece of a package that includes the Tuscany Hotel, a winery and the “gourmet” Restaurant at the Renault Winery. The course winds its way through and past grapevines and orchards. The track was designed by Ed Shearon and kept to owner Joseph Milza’s vision of a layout that is challenging for good players but also approachable for visitors of all skill levels.

We played a round, got a tour of the winery, sampled some of the fruit of the vine, and had dinner at one of the two restaurants on property. It’s was a laid back way to enjoy two days away from the casinos and Boardwalk.

The Links at Brigantine Beach is yet another historic course designed by Wayne Stiles and John Van Kleek, who created some fine courses at the turn of the 20th century. Brigantine has a sense of being a Scottish links layout, with berms, gently rolling fairways that are almost devoid of trees, tall grasses off the fairways, mounds and smallish, tricky greens typical of links courses.

Like ACCC and Seaview, Brigantine, opened in 1927, has some of its own rich golf history. The locals told me that Walter Hagen and Harry Vardon played at Brigantine to acquire a feel for links courses before setting sail to play in Scotland at the British Open.

I’ve always felt that Blue Heron Pines Golf Club in Cologne is one of Jersey architect Stephen Kay’s best designs. It takes full advantage of the natural beauty of the area’s pinelands and is a pleasing blend of short and long par-fours, solid par-fives–several of which are reachable in two by big boppers–and great par-threes. There are numerous bunkers that come into play both off the tee and on approach shots to the medium-sized greens.

Sand Barrens Golf Club in Cape May, designed by Dana Fry of Hurzdan/Fry, is another of the better newer tracks to open. Fry said he designed Sand Barrens to be reminiscent of Pine Valley Golf Club–with fairways and greens surrounded by monstrous waste areas, evergreens and oak trees–when visiting the site in preparation for construction. Although the gleaming white bunkers pose challenges for even the best players, Fry designed a course that has plenty of room to land the ball off the tee and large, receptive greens, unlike THE Pine Valley, which is OK because of the large amount of tourist play the course gets.

One of my favorites in the AC area is Harbor Pines Golf Club in Egg Harbor Township. It’s a rather open layout that has plenty of water and bunkers. The track just feels good and looks pleasing to my eye.

Number 12 is one of the most photographed holes in New Jersey and visually a stunner. The tee shot on this 339-yard par-four must clear a large pond and land in a small fairway that sits before the green. The putting surface is protected by bunkers all around and water to the rear. You can make birdie or double bogey here, depending upon your accuracy and length off the tee. It’s an example of a great, short par-four.

Sea Oaks Golf Club became a destination course two years ago with the opening of The Inn at Sea Oaks. The Inn has 31 units in all, 17 “standard rooms,” and the rest either executive or master suites.

The course at Sea Oaks is a Ray Hearn-design that fits naturally into the environment, with sandy waste areas, tall pines and water incorporated into this thinking golfer’s track.

Twisted Dune Golf Club in Egg Harbor Township is a links-style course that was plopped down in a residential area, but it works for me. The course was designed by Archie Struthers in a links style, with the track winding through a “twisted” landscape, dramatic elevation changes and contoured fairways. There are over 100 bunkers on this beast but the fairways are wide and the greens accepting of approach shots.

One more to throw at you. Shore Gate Golf Club in Oceanview is both interesting and intimidating. The Ron Fream-David Dale creation has deep greenside bunkers capped off by chocolate drop mounding that often presented a somewhat disconcerting scene when I stood on the fairways and prepared to hit approach shots.

Atlantic City is a place where you can go with your buddies or take the family for a few days or week. There are more than 100 retail outlets on the Boardwalk, a Steel Pier amusement park for the kids, as well as an IMAX theater. The food in the casinos is acceptable and sometimes quite good. Prices vary wildly. There are some decent restaurants and pubs off the Boardwalk but a few seedy ones as well that you might want to stay away from.

Me and two buddies got lucky, which is always good thing in Atlantic City, as Mike Charlton of GolfAC hooked us up in a sweet digs near the Links at Brigantine. The owner calls the house The Vardon House and it has enough room for eight people. Green Life Designs installed a putting green at the house, a fun way to spend a few hours after golf and before the casinos and nightlife. The Vardon House is part of the collection of rental properties offered by www.golfac.com. GolfAC promotes golf vacation packages combining the best of golf in the Atlantic City region. For more information about Green Life Designs, check out www.njputtinggreens.com or call Jim Dickson at 609-204-2952.