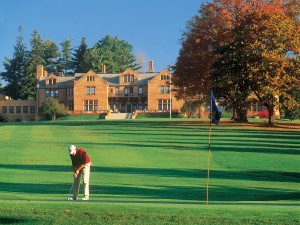 One of my favorite courses in New England is located in Lennox, Ma., the historic layout at the Cranwell Resort, Spa and Golf Club.

The course was designed by Wayne Stiles and John Van Kleek and was built in 1926.The entire resort is a most pleasing combination of old and new world amenities, such as a state of the art spa blended with a Old World dining room in the mansion called Wyndhurst, which was designed by Frederick Law Olmstead and lived in at one time by furniture baron John Sloane. Much of the present grounds and buildings were built during the Gilded Age and welcomed wealthy industrialists and writers of the day.

The golf at Cranwell is also a pleasing combination of historic and modern. While upgrades have enhanced the overall conditions of the track they have not much altered the Stiles-Van Kleek original routing, which ambles over rolling terrain and offers an interesting loop.

The course features tree-lined fairways and naturally contoured greens that have been carefully preserved during the more than 80 years since the course was built. In addition to being awarded a Four Star Rating in Golf Digest 2008-09 “Best Places to Play,” the course also received the SpaFinder Reader’s Choice Award “Best Spa for Golf” and “The Best of Northeast Golf” Reader’s Choice Award.

In addition to the award-wining golf course, there’s an extensive golf practice facility on the premises manned by PGA pros that includes a short game area and an indoor complex for inclement weather.

Some thoughts on the course’s architects.

Stiles of Massachusetts and his partner Van Kleek collaborated on a number of notable courses in the northeastern United States. While they never quite received the acclaim of architects of the late 19th and early 20 centuries, such as Donald Ross, A.W. Tillinghast, Alister MacKenzie, and Charles Blair Macdonald, the duo nonetheless possessed a fine sense and understanding of the land they worked with and how to design courses that would use the natural contours of the terrain and add to them such elements as humps and hollows, bunkers and ponds and tricky green complexes that place a premium on short game skills.

Other than one of their finest works, Cranwell, the pair created Boothbay Country Club, Franconia Golf Course, Oak Hill Country Club, Taconic Golf Club, Wahconah Country Club, Laconia Country Club, Brattleboro Country Club, Rutland Country Club and dozens of others in New England. Although a number of the Stiles-Van Kleek designs have been altered so considerably as to destroy much of the pair’s original design features, others still play much as they did when the pair smiled during their openings.

Cranwell is a delightfully varied, some might say quirky, course, but in a pleasant way, with the course flowing naturally over the land as was typical of most courses built at the start of the 20th century, and several short par-fours play tougher than they read on the scorecard.

The first three holes wander near a small clubhouse and the tee box on the third hole, a little 152-yarder that has a huge pine tree guarding the left side of the putting surface, is right by the resort’s roadway, so you may have to hold your swing until cars have passed by.

From the fourth hole on the course dips into the woodlands and really takes on a character of its own. The fifth, a 233-yard par-three, is one of the most demanding short holes you will find anywhere and the only hole where you will find water.

The eighth hole is one of the nicest on the course. You tee off next to the resort hotel and can cut the distance to the hole on the 347-yard par-four dramatically if you take the drive over trees that hug the left side. It’s all downhill to a very small green that is quite easy to miss if you don’t concentrate on the pitch shot.

The inward nine is much more difficult, with several brutal par-fours and some very good par-threes. The 11th is one of the course’s signature holes, a 200-yard par-three that plays from a chute of trees to a severely slopped green. Huge bunkers guard the putting surface.

The 13th is a dogleg par-four that plays 426-yards from the tips. The drive is blind to a valley landing area and then it’s back uphill to the putting surface.

The finishing hole is a feel-good, wide open 393-yard par-four that allows you to hit driver and follow up with a mid- or short-iron into the slightly elevated green. Then it’s a bit of a drive, or walk, back to the clubhouse, which is fine because it allows you to take in the scenery and tally up your score.

Actually, Cranwell has 19 holes. There’s a really good par-four situated near the eighth green that plays toward the clubhouse, allowing golfers who need to get back for dinner or a spa treatment to enjoy a shortened round of nine.

The par-70 track is not long even from the back tees, measuring just 6,204 yards from the tips. But don’t be fooled by the overall yardage. A number of the holes play uphill and the short par-fours have danger lurking all around and take driver out of the hands of the big hitters.

After golf, dinner in the Wyndhurst Room is a treat. The room is attractive and rather small and lends a feeling of being sent back to a time when the enjoyment of food was one of the main pleasures of life not something to be rushed through.

The resort also offers laid-back atmosphere of Sloane’s Tavern Bar by the golf clubhouse, where you can get a great cheeseburger and a side order of fries to go with a beer. It’s a pleasant aspect of Cranwell that you can highbrow it in the Wyndhurst or put on shorts and a tee shirt and relax with the members down at the grille. Autumn is an especially good time to visit and tour the surrounding Berkshires.