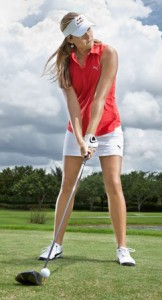 Lexi Thompson is the coolest thing to hit professional golf since a fresh-faced Tiger Woods burst onto the scene and into our living rooms 15 years ago and made everyone fall in love with the game. Seems so long ago, doesn’t it?

But Ms. Thompson has a chance to reenergize a sport that needs new energy. The LPGA did the right thing in granting her playing status in 2012 even though she hasn’t yet had a chance to take her Justin Bieber posters off her bedroom wall.

Listen, the kid (16 years old) can play. And if she can win on a professional Tour like she did when she captured the Navistar Classic recently (by five shots no less) then she deserves a chance to keep playing and winning. Golf desperately needs a feel good story, some kid that we can get excited about and who will draw young fans (and, let’s face it, women) to the game the way Woods did when he burst upon the scene and performed magic for a dozen years.

We thought Michele Wie was going to revolutionize the sport for he ladies a few years back and she did, kind of. That was before she adopted an ass-backwards approach of spending much of her teenage years golfing and trying to play on the both the women’s and men’s tours, and then deciding go to college when she should be out living up to the hype that surrounded her when she was a 13-year-old bombing it 300 yards and beating men. I honestly think Wie is going to Stanford to tick her parents off. They ruled her life with such an iron fist when she was a kid and wound up depriving her of basic joys, like having a boyfriend and going to her high school prom. Instead, she played golf and then she played more golf and more golf until she was burned out. Remember those 88’s she was throwing up a few years back? I’m not one to knock education but it is difficult for me to understand anyone with the athletic talent that Wie possesses (as well as millions in the bank from endorsements and winnings) would want to stay up until 3 a.m. cramming for a trigonometry exam. A tad bizarre if you ask me. But that’s her life.

Alexis Thompson is rarin’ to go and I can’t wait to how this kid does next year. She’s wise not to jump full bore into the LPGA this year and wait until she has her mind and affairs sorted out before she goes at it fulltime in 2012.

Golf needs Lexi Thompson the way it needed Tiger Woods. She can attract young girls (and boys) to the game, which is one significant and lasting way we can grow golf in the coming years. Young female golfers have traditionally been underserved and often they are intimidated by the game. Women’s golf organizations have also not done enough to promote the game to girls (i.e., spending money establishing junior programs for girls, funding female high school teams, etc.). Alexi can pump a new vitality into the game and finally make young females understand the joys of competing at what is one of the best games ever invented.

With Tiger on the wane, Alexis Thompson may just be the next savior the game needs.