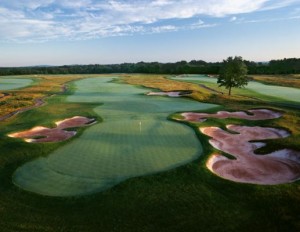 The owners and operators of Royce Brook Golf Club in Hillsborough, New Jersey have continually invested money and energy into the property’s two championship golf courses, the clubhouse, and practice areas.

Royce Brook, which is owned and operated by Billy Casper Golf, boasts two of the highest rated courses in the state. The private West Course and the daily fee East Course, tracks that always impress with their routing, well-manicured fairways and demanding shot values, all of which helped earn the Royce Brook Golf Club the New Jersey Section PGA “Golf Club of the Year” in 2005.

Located just an hour’s drive from both New York City and Philadelphia, Royce Brook Golf Club also has award-winning restaurant and banquet services, as well as an expansive practice facility that includes one of the top golf academies in the state, with highly regarded PGA instructors and state-of-the art swing analysis on site.

Said General Manager Dan Guinle, “We are creating practice hub for the members by enhancing the performance and presentation of the short game area. It will have three activity zones–chipping, bunker play, and pitching–centered around three USGA-regulation greens. Adjacent to the short game zone near our practice tee we are installing a canopied hitting area for an improved full-swing experience in both the heat of the summer and in inclement weather.”

Noted golf course architect Steve Smyers did a masterful job designing both layouts at Royce Brook. The two courses are pleasingly different from one another in nature and shot values.

The more open West Course has a real links feel to it, with wide fairways, plenty of bunkers, a rather treeless landscape, rolling greens and tall fescue grass that grows off the fairways in the summer and fall.

The East Course is more of a traditional American parkland course. While there isn’t a lot of water on the two courses what there is comes into play, especially on errant shots. The courses are laced with bunkers and numerous doglegs make well thought-out tee shots a must in order to set up reasonable approaches to the rather spacious greens.

Considered more challenging by some, the private West Course can be stretched to 7,200 yards. It has a slope of 135 and a rating two shots above its par of 72, which tells you something about the challenge that awaits here.

The West Course’s 419-yard par-four fourth is a superb design. You’ve got a decision to make on the tee box, and that’s whether to take your tee shot right or left of a gaggle of bunkers in the fairway landing area. Left shortens the hole, but the bunkers must be avoided at all cost if you want to have a realistic chance of getting on the putting surface in two shots. Thick rough further left of the bunkers also must be steered cleared of to prevent bogey or worse from rearing its ugly head.

The 14th hole on the West Course could be the toughest short hole on either course. The par-three is a beefy 219 yards from the tips to a green that is protected by water right and rear and numerous bunkers. Number 18 on the West is a good finishing hole that decides the outcome of many a match. There are no tricks on this hole, just lots of length—like 461 yards from the back markers–and nasty fairway bunkers.

The East Course is what might be called a more player-friendly layout and plays a tad below 7,000 yards from the tips. It features rolling fairways and subtly undulating greens, which still demand precision off the tee and a good short game once you get on or around the putting surfaces.

The seventh hole on the East Course is a classic, double-dogleg, 495-yard par-five that has multiple bunkers, both in the fairway landing area and by the green. The 12th is another good par-five, measuring 492 yards, with water on the right. And the 429-yard par-four 16th is a beast of a hole with water guarding the right side.

The aforementioned Academy of Golf, which has been listed by Golfweek magazine as one of the top 25 golf schools in the country, offers personalized curriculum, state-of-the-art equipment, a 24-acre, double-ended practice range that has been rated the best on course practice facility in the state, and climate controlled classrooms that are always available for lectures, video reviewing and discussions. The Academy has various packages available for golfers of all skill levels.