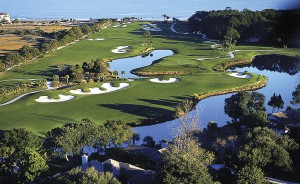 It was with great anticipation that my golf buddy, Mark Eucalitto, and I approached the tee box on the signature hole of the Robert Trent Jones, Jr. course at Hilton Head, South Carolina’s Palmetto Dunes Oceanfront Resort.

The 10th on the Jones Course is a masterpiece by one of the most renowned golf architects of his time. It looks like nothing much on the scorecard, a 550-yard straightaway par-five from the back tees. But that little piece of laminated paper doesn’t tell the story of what a wonderful hole Jones crafted.

The 10th plays directly toward the ocean, a magnificent three-shot hole that passes along fairway bunkers and a lagoon on the right before it concludes on an elevated, undulating green. The Atlantic is only a few yards away, the breakers pounding upon the shoreline, wisps of sea grass bending in the wind as you try and concentrate on holing out with such beauty all around. Making par here with three solid shots and a two-putt was one of the most satisfying fives I have ever recorded, serenaded by the sea, ocean birds circling about overhead and the breeze pushing us to the 11th hole, a real nice par-four that plays downwind 405 yards with a pond to the right side that makes the drive and second shot problematic in tough conditions.

I don’t know about you, but paring, or better yet making a birdie on a great hole always etches the memory of the experience more firmly in the mind.

The 13th hole on the Jones Course, a 398-par four that has water in front of you off the tee, is a perfect example of how local knowledge can assist in club selection. Mark hit driver, struck it well and seemed to be in fine shape on the right side of the hole. I also hit driver, not that great, but was left with a shot of about 150 yards in. When we arrived to find Mark’s ball, uh oh, it had run through the fairway on the dogleg left hole and found the marsh, which always seems to be lurking somewhere near the fairway or greens on Lowcountry tracks. On a second play, Mark would have taken three-wood and laid up to the 150 marker instead of getting too frisky off the tee and pushing his tee shot a tad too far long.

The 18th at the Jones Course at Palmetto Dunes is one of the best four-pars I have played in some time. I needed to thread a driver between fairway bunkers on a tight fairway to set up a short iron approach to a large green. I pulled an eight-iron to the left but got down in two for a solid par.

The cool thing about our visit at Palmetto Dunes was that we got to play the three courses the resort on this most famous of resort islands has in its portfolio. There’s also Arthur Hills and Georgia Fazio courses that, while similar in nature to many Lowcountry, seaside tracks, offer quite different challenges from one another and the always visually delicious scenery.

A little about our accommodations. Okay, I’ve been accused of hyperbole but our quarters at the one of five oceanside hotels the resort owns were, quite simply, the best I’ve ever had the pleasure of visiting. The views of the Atlantic from our fifth floor suite were stunning, whether it was from our bedrooms, the living room or balcony. Let’s put it this way, our wives didn’t want to leave the place, that’s how sweet the suite was. It was spacious, clean, comfortable and had all the creature comforts one comes to expect from a first class resort, which also offers tennis, swimming pools, Jacuzzis, a workout area, miles of hiking and biking trails and on and on. A few days at Palmetto Dunes, which unfortunately is all we had, isn’t enough. If you’re going, spend at least four or five nights and drink in everything the resort has to offer. There’s a little grocery store on the premises that offers great breakfast sandwiches and southern fried chicken (nobody makes chicken like Southerners), barbecue (nobody makes barbecue like Southerners), and cornbread (nobody makes, well, you get the idea) for après golf. Each course also has a dining establishment in its clubhouse.

The next day, a bit rainy and chilly for Hilton Head in December, we headed off to play the George Fazio (the lesser known of the Fazios that includes Tom Fazio). While George doesn’t have as great a reputation in the industry as does his nephew Tom, he nonetheless produces solid courses that make wise use of the terrain. His layout at Palmetto Dunes is very good with the holes setting up nicely in a visual sense off the tees and approach shots to the medium-sized greens. George Fazio courses are particularly noted for the shapes built into bunkers, such as clover-leafs and butterflies. Hey, why not.

Because rain threatened (and fell at the beginning of our round) we were instructed by the affable staff at the Fazio Course to go off on the backside, which has some of the best holes on the course. The 10th is a  513-yard par-four that doglegs slightly to the left. I hit a good drive and was left with about 250 in. I laid up, hit a short iron into a sloping green and made par.

Mark and I both really liked the 11th, a 394-yard par-four dogleg (many of the holes here do that) to the right that demands you carry water off the tee and avoid a staggering amount of fairway bunkers. The green is surrounded by sand and slightly pushed up.

The 15th hole, a 445-yader par-four, is an example of how the wind can affect ball flight and carry on Bermuda grass courses. I launched a high tee shot that bounded on the fairway and kept rolling, leaving me with just a wedge into the green. Remember, it’s downwind. The same hole and tee shot played into the wind would likely have had me hitting a four- or five-wood into the putting surface. Bermuda grass will allow the ball off the driver to kick considerably forward if aided by wind but will make the ball stop like a wedge into the wind.

I thought the 17th was the best par-three we played at Palmetto Dunes. It measures 230 yards from the tips and it’s a full carry across water. Because the wind was hurting we whimped out and moved up a couple of tee boxes. I struck a cute eight-iron to within 15 feet and made 3. A really pretty hole.

Arthur Hills has done a lot of solid routings, especially in the South, and his layout at Palmetto Dunes doesn’t disappoint. Once again, he skillfully incorporated the ever-present wetlands and waterways into the course and created some mounding in the fairways to leave you with slightly tilted lies, uncommon for Lowcountry courses.

The second and third holes at the Hills Course show off the architect’s genius at blending water features into holes to create interesting and challenging shots. The second is a short par-four that demands a drive up as close to water that fronts the green as you dare followed by a short iron over the wet stuff to a green that, amazingly enough, has no sand bunkers. The third hole is a tasty little par-three that plays only 146 yards from the back. But the shot is again over water with a huge trap guarding the front side of  the green and sloping to the water’s edge.

The eighth hole is another short par-three over water that demands only a mid-iron. But again, the tee shot is intimidating because of a pond that stretches from the tee box to the green. But at 156 yards from the back markers don’t even think of finding the water, just grab a mid-iron as we did and make a good swing and the rest will take care of itself.

Hills was said of number 12 that “the fun starts here,” and he was right. This 399-yard par-four begins a series of holes where accuracy off the tee is of paramount importance because of water that lines one side of many of the finishing holes. The wise choice, is, of course, to favor the side away from the water; get it in the fairway and take your chances with a long-iron and stay away from the driver off the tee. Better safe than sorry.

Palmetto Dunes is a great place for a couples or buddies golf trip. With three courses, all three of which you could play twice and have just as much fun, as well as superb quarters and amenities, you can easily settle in for an extended stay. And, oh yeah, those views of the ocean from the hotel will also keep you smiling when you put your feet up after a day on the course.