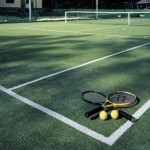 It’s nice to see Ana Ivanovic back in form again on the tennis court.

The 23-year-old Serb, who was once the number one ranked player in women’s tennis after winning the French Open and reaching the finals of two other Majors in the latter part of the first decade of the 21st century, fell upon hard times and was bounced out of more tournaments in the first round than a lucky qualifier.

She went 19 months without a win but her partnership with coach Heinz Gunthardt started to pay dividends in 2010 when she had several impressive results, including getting into the fourth round of the U.S. Open, where she lost to eventual champion Kim Cljisters. She posted two wins at the end of the season, taking the Generali Ladies Linz and Commonwealth Bank Tournament to reposition herself among the elite players on the women’s side.

The stunning Serb looks slimmed down and ready to fight her way back to the top. She was impressive in beating countrywoman and defending champ Jelana Jankovic in straight sets this week at the BNP Paribas Open at Indian Wells, Ca. The right hander with the big serve and powerful groundstrokes now faces Maria Bartoli for a place in the semifinals.

Ivanovic, who has model good looks and a smile that can melt the ice off a crusty old man, caught a  break when Cljisters had to retire from her match with Bartoli because of an arm injury. Ana should be able to take care of Bartoli and get to the semis. She wins that round and she may get to face another glamour girl on the comeback trail, Maria Sharapova, who also looked rock steady through the first four rounds of the tournament that brings the best players in the world from both the women’s and men’s tours together. That meeting would take place in the finals. If you like attractive tennis in more ways than one, that isn’t a match you will want to miss.