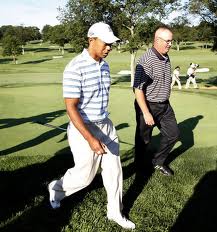 I’ve said this before and I’ll say it again. If you are feeling kind of down, feeling kind of blah, then do yourself a favor…go hit some golf balls at your local range. I could almost guarantee you that once you start banging balls for a while, you will either see or hear some of the most incredible things…all guaranteed to put a grin or big smile on your face.

I look at driving ranges as sort of “proving grounds” for people either real new to the game or folks who are infrequent players wanting to knock the rust off of their clubs. Husbands and wives, a father and his son or daughter or 2 friends that are offering up their version of what you are doing wrong and how to correct it.  I have overheard some golf theories that must have originated somewhere in outer space. I have seen golf swings that are beyond description and these are the same people giving others advise as to how they can break 90 if they just do this and just do that.

All of these folks mean well…they just don’t know any better. They don’t realize that in the long run they are doing a big disservice to whoever they are trying to help. It gets even better because sooner or later the conversation turns to golf equipment. Everyone is an expert when it comes to equipment at the driving range. You have to wonder, though, when the person offering advise as to your driver is using something made right after World War 1…with the headcover to prove it. Again they mean well but if the truth be known, these folks wouldn’t know a cavity back club from a forged club to a blade.

After I hit balls for a while, I usually stop and rest so that I can have the opportunity to sit near by and hear these folks talk about Tour professionals and how they swing. “Just swing like Tiger, Fred. All you need to do is turn your hips a little faster.” Keep in mind Fred is on Social Security. Another one of my favorite lines that I hear, coming from both men and women is, ” Why do all my clubs go the same distance, honey?” The answer is usually so protracted and gibberish that I almost forget to hit the rest of my bucket.

Come on folks! The rule is: If you can’t walk the walk, shut the hell up! Tell your partner that if they are somewhat serious about the game and want to stay in it, go see a good teaching professional. By the way, the fellow next to me was done hitting balls and asked someone coming by if he “wanted to play here.” Really?