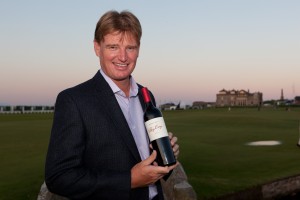 Ernie Els and The Big Easy

You would expect any golfer winning the famous Claret Jug, the iconic prize of the Open Championship, to uncork a bottle and fill it up in celebration.

But oddly enough Ernie Els, the South African who took first prize at Royal Lytham & St Annes this year, was having none of it. If fact he announced he was going to have a day off the booze all together.

It can’t have gone down too well with the people marketing Ernie’s vineyard in South Africa, although in retrospect it mattered very little.

Ernie Els Wines was established in 1999 in Stellenbosch, the beautiful wine growing region near Cape Town. Despite his moment of denial immediately following his latest Open victory, Ernie – known as “The Big Easy” due to his relaxed golf swing –  has a taste for fine wine and he decided he wanted his own vineyard.

He hired award-winning winemaker Louis Strydom, and set about his ambition to produce world class wines to mirror his success on the golf course.

The vineyard is famed for its reds in particular and the top of the range, The Signature, is a very fine wine indeed. A blend of Bordeaux varieties it would certainly not be out of place in the R&As revered Claret Jug. His entry level blend – The Big Easy – is also great quality, and considerably more affordable.

Ernie is not the only golfer to have pursued a passion for wine. His competitors in the grape stakes include Arnold Palmer, Jack Nicklaus, Luke Donald, Greg Norman and Frank Nobilo, some in the game for the love of wine, others as investments.

Indeed it is not just golfers who have turned to the wine game – celebrities of all professions have been known to dabble with the grapes.