Simon Freeman, the former long-time head greenkeeper at the legendary Machrie Golf Links, has moved across the water from the island of Islay to the Scottish mainland to take the same position at Machrihanish Dunes Golf Club. He began work at the end of 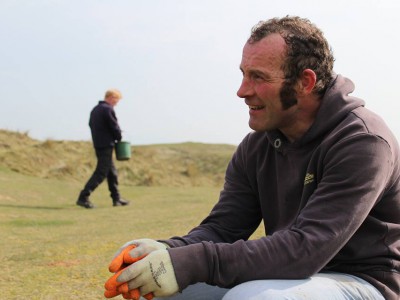 In his 15 years at the Machrie, Freeman maintained a golf course that did not have an irrigation system; the water came from the skies.

After all that time does he even know how to  run an irrigation system?

“No. I actually don’t have a clue. I’ve been told that the Toro system the Dunes has is among the easiest systems to use though, which is nice to know,” he wrote in an email. “I’m absolutely sure that it will be easier to learn how to use the irrigation system than it was to learn how to manage links greens without one!”

According to Freeman, the fact that Machrihanish Dunes is probably the most environmentally restricted golf course in the world does not cause him worry. Because it’s in a Site of Special Scientific Interest irrigation at Machrihanish Dunes is only on greens and tees, also the only areas that are allowed any inputs such as fertilizers.

“I treat everywhere I work as an environmentally restricted site. I tried as hard as I could to protect every aspect of Machrie`s environment, and I think I did it pretty well,” he wrote.  “OK, so when you have a legal responsibility as well as a moral one you have to be even more careful, but when you have an inbred respect for your surroundings the guidelines at Mach Dunes are really not that restrictive.”

Freeman will be joined on the mainland by his son Brandon, 16, daughter Bailey, 14, and his wife Catherine, who he insists, “will always be 21.” He said he was delighted when Keith Martin, the Owner’s Representative for Machrihanish Dunes, approached him about becoming head greenkeeper.

“I was well chuffed to be asked. It’s one thing looking after a golf course where nobody expects much because of the limitations, working basically on your own with a couple of willing helpers to cut the grass,” he wrote. “It’s another thing altogether coordinating an operation of this size with this weight of expectation, a weight of expectation that is fully justified given the investment that has been made by the owners. I was delighted that somebody came over to my turf and offered me a challenge.”

What will Freeman, an avid mountain biker, most miss about Islay?

“My house, which we bought from the council and then had extended beautifully by a local builder to my dad’s clever design. It’s a superb living space with fantastic views,” he wrote. “So if anybody is looking for a house on Islay, it’s up for sale.”