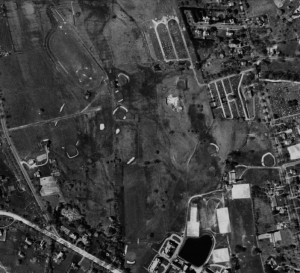 A 1934 aerial photograph of the Taft School’s nine-hole course. Only the green on the far right appears to be a Raynor design. (Photo courtesy State of Connecticut Library)

Add another design to the Seth Raynor portfolio.

It appears that Raynor drew up plans to renovate the 9-hole golf course of the Taft School in Watertown, Conn., adjacent to the Watertown Golf Club. The layout, unfortunately, no longer exists. Whether the course was ever built to Raynor’s design is unknown.

Raynor first visited the school in 1922 and plans for the upgrading of a nine-hole course were received in January of 1923. It appears his nine holes were built in 1924, but changed soon after. A 1934 aerial, seen at right, shows only one hole that still appears to have Raynor’s fingerprint. It is a par-3 on the far right of the photo and has  bunkering common to a Short Hole.

Taft, much like it’s nearby rival, the Hotchkiss School, which still has a nine-hole Raynor design, was a feeder schools for Yale where Raynor built what many consider his best course. It was while working at Yale, starting in 1924, that Raynor also designed Hotchkiss. He died while both were under construction and they were finished by Charles Banks, originally a teacher at Hotchkiss, who left the school to take up golf course architecture.

At the time and to this day, Taft owns the land on which Watertown G.C. is located.

The discovery of the lost Raynor came while Bret Lawrence was researching the Watertown G.C. history. It was then that he came across this item in the Oct. 4, 1922 issue of the Papyrus, the newspaper of the Taft School. 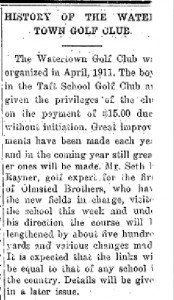 “The Watertown Golf Club was organized in April, 1911. The boys in the Taft School Golf Club are given the privileges of the club on the payment of $15.00 dues without initiation. Great improvements have been made each year and in the coming year, still greater ones will be made. Seth K. Rayner (sic), golf expert for the firm of Olmsted Brothers, who have the new fields in charge, visited the school this week and under his direction the course will be lengthened by about five hundred yards and various changes made. It is expected that the links will be equal to that of any school in the country.”

Then, as now, Taft students had the use of Watertown, which brings up the question why would the school need to upgrade an existing nine holes. The article, as with every subsequent one, spells Raynor’s name incorrectly.

The second article, coming two weeks after the first, reports Raynor had been on site.

“The Taft School is to have a newly made-over golf course. Seth K. Rayner, noted golf architect, has spent a day here studying the course. The new links, which is to be laid out entirely under the direction of. Mr. Rayner, will extend all around the new Rockefeller athletic field. New greens, new tees and many obstacles are to be erected which is hoped will make the course as good as that of any preparatory school. The increase in distance in the new course will be about five hundred yards. The plans will be reviewed in detail as soon as they come back from the architect.”

Opening day, it was hoped, would be a year away.

An article from January of 1923 says that the plans were received by Mr. Roberts. Harley Fish Roberts was Horace Tafts’ right hand man. This was also the last time Raynor’s name—still spelled wrong—was mentioned. 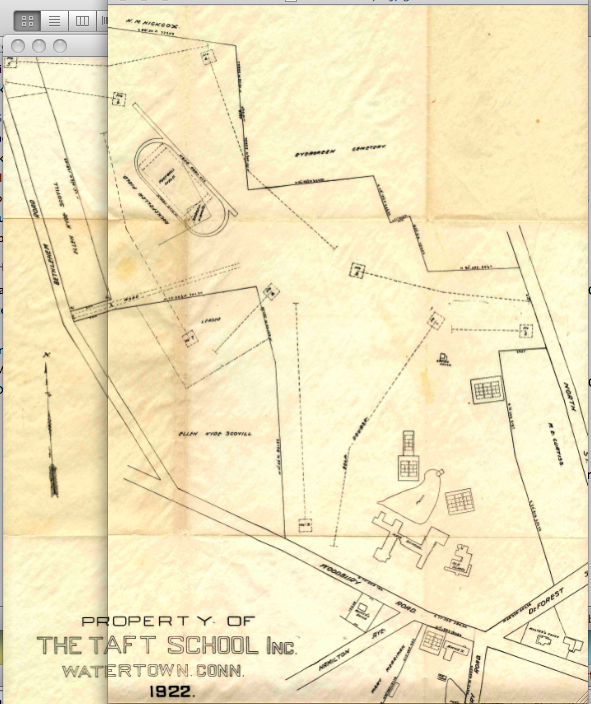 “It will not be trapped so heavily as a championship course, but its good architecture should in some way compensate for this,” reads the story.

During his research at Taft, Lawrence, working with Taft archivist Alison Gilchrist,  found a 1922 survey of the property that has on it a rudimentary routing apparently of the Raynor design. Tees are indicated by a straight line, center lines are shown by a dashed line and greens are square. No yardages are given and no hazards shown. A portion of the map is at right.

The next mention of the course in the Papyrus came a year later, in October 1924, at the same time the Yale and Hotchkiss courses were being built. If Raynor visited Hotchkiss while it was under construction, he would have driven within a short distance of Watertown on his way from and to New Haven. By then, however, it looks as if Raynor’s course was being altered and his services no longer desired.

According to the Papyrus, over the summer fairways were improved and holes lengthened.

“Numerous bunkers have been placed on fairways and several of the greens are surrounded by sand traps,” reads the article.

Then in 1925, even more modifications to the course occurred. 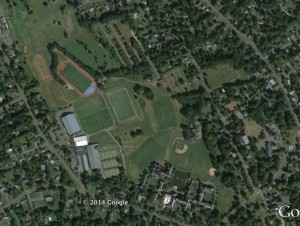 The tees on the first, second, fourth were moved. Greens on the third and eighth hole were relocated.

The shorty Papyrus story reads in part, “… the ninth hole is entirely new. The stone wall was torn down and a fairway has been made directly west of the old ninth fairway.”

A green was built in a new location

“Altogether the course is much longer now and much more difficult and should prove more popular,” reads the concluding paragraph.

This is most likely the layout seen in the 1934 aerial.

Lawrence, has an alternate theory to mine regarding the course work. He thinks all the alterations were implementations of Raynor’s design, but that it took far longer to get into the ground than first thought. Although he has not found a drawing or photo of the original nine, Lawrence has dug up references to specific holes. For instance, he learned that the third green was originally located before a rubbish pit in the field and that Raynor moved it 50 yards further  to play over this rubbish pit. The hole was built to those specifications.

Lawrence may be correct. Stay tuned.

The above aerial shows the location of the golf course as it appears today.