It’s time to rethink the meaning of  “a round of golf.”

For so long, an “authentic” round of golf was considered to be a 18 holes, but in the years since my first book on nine-hole golf courses, To the Nines,  was published in 2006 the concept that nine is fine, is once again gaining favor, as it was prior to the Second World War. Now  it’s time to expand—or contract—that idea, as the case may be.

The concept that there is a correct number of holes—9 or 18—that must be played each time out needs to be abandoned. Hasn’t everyone found themselves getting to a golf course too late in the day to get in nine, never mind 18, but teed off anyway? No matter how many holes were played, the number never deterred from the fun, whether it was four, six or 11 holes. 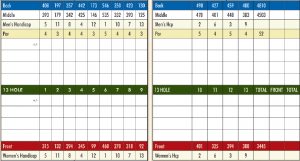 You can bet your paycheck that in every golf-playing country there are those who like to get in a few holes before work, and whatever “a few holes” turns out to be is just right.

Getting past the idea that one must play nine or 18 is a way for facilities to get golfers to the tee who don’t have time, energy or desire to play one of the two standard rounds. The good news is that it is already being done and with much success.

There is probably no better example than Jefferson (Wisc.) Golf Course, which I wrote about in my book The Finest Nines, North America’s Best Nine-Hole Golf Courses. In the chapter called Odd Ones In, I profile layouts that have a non-traditional number of holes. At Jefferson, the number is 13. What the facility, which is a non-profit entity, has done is to is utilize the routing so that golfers can pay to play four, nine, 13 or 18 holes. The motto at Jefferson is “Where Par is Whole New Number.”

For those just learning the game, young and old, or perhaps someone looking for a quick bit of exercise, then four holes is wonderful number. When nine is too few and 18 too many, Jefferson offers up 13 holes. You have to think the regulars have also figured out how to combine the various loops into rounds of 17 or 22 holes.

At architect Mike Nuzzo’s Nine Grand golf course under construction in Cleveland, Texas, also profiled in The Finest Nines, the nine holes are designed so that shorter loops will be possible.

This is not a new concept. Shiskine Golf and Tennis Club, in the Scottish village of Blackwaterfoot on the Isle of Arran has a 12-hole course, designed by Willie Park, Jr., that dates back to the 1920s. 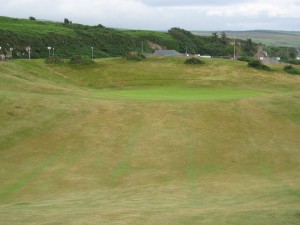 According to the Shiskine website, most competitions are contested over the 12 holes. When an 18-hole round is required golfers play 1-2, 8, 11-12 and the “new” 15th, which is created by playing from the third tee to the fourth green.

I played 12 at Shiskine a few years back and it was a fantastic. Never did the thought cross my mind that I had not played a full round of golf.

The concept of allowing golfers to access non-traditional loops is should be recognized as a way to increase play, and revenue, especially at daily fee facilities, if new routings can be created.

It is common at private clubs for members to cobble together their own courses. For instance, at Hartford (Conn.) Golf Club, where I caddie on weekends, golfers heading out from the first tee late in the day are known to play holes 1-2 , 16-18 or 1-2, 7-9. There is also the 10-13, 7-9 circuit.

One friend suggests making the short loops a family affair, especially families that have small children.

“Shows young folks a golf course is a great and beautiful place to be, apart from playing the game,” he said. “Let them throw rocks into a pond or check out the frogs.”

As far as the elders, “Learn to chip uphill from the front of greens as you’re walking. Hole all the putts. No careless shots. Carefree is good.”

All this talk of not playing a standard round is not a knock on the USGA’s Play9 program. It is a wonderful movement that’s helping rekind the concept that nine is “authentic” round of golf. I don’t want to tell people not to play nine or 18, but there is something inviting about playing a round of 13 holes… or four… or eight… or… .