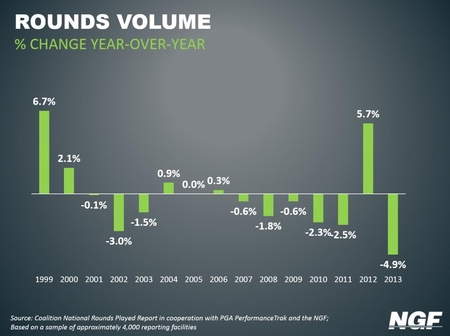 Golfers played 4.9 percent fewer rounds in 2013 as compared to 2012, according to the National Golf Foundation, which released the year-end report today. It was the sixth time in the last seven years that rounds were down compared to the year before. In 2012, rounds were up 5.7 percent over 2011.

The NGF said poor weather was a factor in the 2013 slump and good weather was the cause for the increase in 2012.

According to the NGF report: “PGA PerformanceTrak reported a 6.9 percent drop in national playable days in 2013 (23 fewer days open than 2012).  The year-end days open for play were the lowest since PerformanceTrak began measuring this in 2005.

“Only five states saw rounds increase in 2013, most of which are located in the typically rainy Pacific Northwest.  Rounds played decreased in all the other states.”

NGF sees some good news in the numbers. “First, even though rounds played decreased from 2012 to 2013, rounds increased slightly over the two-year period from 2011 to 2013.  Second, despite the impact of poor weather, more rounds were played per day open in 2013 than in 2012 or 2011, according to PerformanceTrak.”

There is, according to the NGF, an ongoing trend that is bucking tradition.

Usually, when a slow economy recovers, the golf industry follows suit. That is not true up until now with this recovery.

“Though most U.S. economic indicators have been trending positively for several years now, this increasingly favorable business climate, curiously, has not supported commensurate improvement in the golf economy, and this lack of a parallel recovery is evident in the 2013 golf metrics,” reads the report.

The NGF surmises that the reason could be golf is lagging behind the recovery this time, there are other socioeconomic factors affecting the golf business or, most sobering, the “demand for the game of golf has fundamentally changed in some way.”