McConnell Golf announces the merger of its two premier Greensboro facilities, Sedgefield Country Club and Cardinal Golf and Country Club, under the Sedgefield banner making the host site of the PGA Tour’s Wyndham Championship the only private club in the country with courses designed by both Donald Ross and Pete Dye. 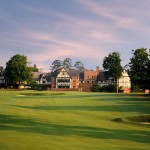 RALEIGH N.C. (March 18, 2013) — When Greensboro’s Sedgefield Country Club was conceived in the mid-1920s, one of the visions outlined by its founding members was to construct 36 holes of golf. Yet, the Great Depression that followed Sedgefield’s conception created such financial challenges for the club that the original vision of 36 holes never completed.

Nearly a century later, the host site of the PGA Tour’s Wyndham Championship is recognized as one of North Carolina’s finest venues. Now, McConnell Golf — owner of both Sedgefield Country Club and Greensboro’s Cardinal Golf and Country Club — has announced that it is completing the original Sedgefield plan by combining the two courses under one brand, which will be Sedgefield Country Club’s Ross Course and Dye Course.

Targeting a May 1, 2013 completion, the merger will make Sedgefield CC the only private club in the country with both a Donald Ross designed course along with a Pete Dye creation, and will provide its members one golf course with Bermuda greens and another with Bent grass — allowing ideal putting conditions throughout the year.

“We sincerely believe that this combination will be a very strong brand in the Triad market and will help solidify the future for both venues,” said McConnell Golf Founder and CEO John McConnell. “We certainly will gain synergies in operations and we feel that this brand will be stronger in attracting new members to the combined clubs.”

McConnell Golf purchased Sedgefield Country Club in February 2011 and Cardinal Golf and Country Club five years earlier. McConnell indicated that his company plans to continue to invest in the infrastructure of both facilities including substantial clubhouse improvements at the Dye Course, providing its members with an inviting ambience.

“Today, both clubs can easily accommodate more members to use their facilities and enhance the member experience,” said McConnell. “By combining our two clubs, we now have a great brand throughout the region and with the opening of the I-73 exit on High Point Road, not only will travel between the two venues be a quick and easy drive for current members, it also enhances our growth opportunities for the new brand in the Greater Greensboro market.

Of note, The Cardinal Amateur is expected to be contested at the Dye Course July 19-21 under the same tournament name as previous years.