GREENSBORO, NC (February 17, 2014) — North Carolina Governor Pat McCrory stressed to a crowd of more than 1,000 North and South Carolina-based golf professionals how important he considers their sport to the state’s economy on Monday during the Annual Meeting of the Carolinas PGA (CPGA) at the Greensboro Coliseum. 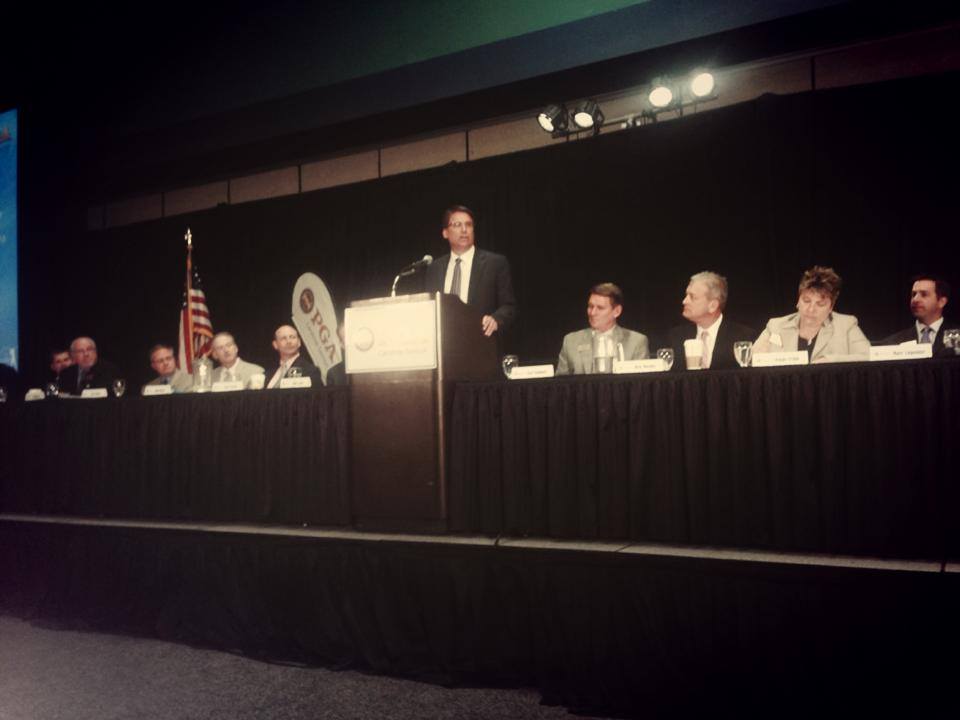 “There is no reason that North Carolina should not be promoting golf as part of our travel and tourism package no different from what Arizona and Alabama are doing right now,” McCrory said. “We have the best ‘Golf Trail’ in the nation, maybe in the world right here in North Carolina.

“And it’s not just in Pinehurst. It’s also in Greensboro and Asheville and the coastal areas [like the Outer Banks and Brunswick County]. We have the best golf courses around and we must integrate that now much more into our travel and tourism package. And not just for travel and tourism dollars but also for business travel — to encourage more business conventions to come to North Carolina and stay in an additional two or three days in [accommodations] and using restaurants, which will create new jobs in North Carolina.”

McCrory told the audience that as part of Secretary of Commerce Sharon Decker’s economic development plan his administration would be using the 2014 Men’s and Women’s U.S. Opens being played in Pinehurst on back-to-back weeks in June as a “major jumping-off point” to promote business in North Carolina, as well as travel and tourism — and using golf as an important way to do it.

“Sharon Decker is really using me [during the U.S. Opens in Pinehurst],” McCrory said. “They’ve told me to wipe my schedule clean for those two weeks. We are going to be meeting with business development people at the two Opens. In fact we’re going to use the Women’s Open to concentrate on Asian companies because of all the Asian golfers. We see more potential with the Women’s U.S. Open as far as recruiting businesses to North Carolina and selling North Carolina.

“From now on when we have anyone come to North Carolina — whether they land in Greensboro or Fayetteville or Wilmington or Greenville or Charlotte or Asheville or Raleigh — we’ve got to promote to the business community to bring your golf clubs to North Carolina because there are no better golf courses in the world than right here, from the coast all the way to the mountains and through the Piedmont.”

Originally founded at Greensboro Country Club in May 1923, the CPGA officially became a Section of The PGA of America in 1940. Committed to nurturing and improving the game of golf, the CPGA today is the largest of the PGA’s 41 sections boasting 2,000 professional members and representing more than 800 golf facilities within North and South Carolina as well as portions of southern Virginia.

Headquartered first in Greensboro and later Durham, the CPGA moved to Myrtle Beach, S.C., in 1976 and remained there more than three decades. In 2012, however, the CPGA returned home to Greensboro — to a 3.1-acre parcel of land at the entrance to Bryan Park Golf and Conference Center, which provided the true “home site” the CPGA was looking for. The new headquarter was dedicated on April 23, 2012.

As a part of the CPGA’s annual Big Week, the 21st merchandise show is one of the section’s major events and has attracted more than 1,000 Carolinas PGA Professionals, who come to Greensboro to do their buying for the coming year, take in a few education seminars and a teaching summit, and attend the Section’s 2014 Annual Meeting.

McCrory said he hoped his appearance at the CPGA’s first Annual Show held in the Triad would help validate the significance of the organization’s presence in North Carolina. The governor added that he envisions North Carolina one day being regarded in similar fashion to California’s famed Wine Country.

“I would like to work with the Carolinas PGA [and develop] a system in which we can allow the travelers to use all of the golf courses in North Carolina, both public and private — and make [North Carolina] like the [California] Wine Valley,” McCrory said. “We could have our own ‘Golf Valley’ of golf courses. Where people would just say, ‘Hey, I’m going to spend another week down [in North Carolina] and go down the Interstates of 40 and 85 and 26 and 95 and see some of the best golf courses in the world right here in North Carolina. And then they’ll spend money in our local towns and cities and help our economy.”

A native of nearby Jamestown, McCrory served a record 14 years as Mayor of Charlotte and in 2012 became the first Republican elected Governor in North Carolina since 1988.

McCrory said he had fond memories of golf around Greensboro. “I grew up at Sedgefield [Country Club], so Sedgefield will always be close place to my heart,” McCrory said. “In Charlotte, I belong to Myers Park. I’m a big Donald Ross fan.”

McCrory, an avid 14-handicap golfer (“although as governor you probably are given a lot more putts”) told the audience he loves the game despite gaining some harsh insight into his own playing ability during a Pro-Am appearance during the Wells Fargo Championship in Charlotte several years ago, when he was paired with 2009 Open Champion Stewart Cink. “[Cink] told me, ‘Governor, I have never seen someone put so much into a golf swing and get so little out of it.’”

“I love the camaraderie of golf,” McCrory said. “It’s my one stress relief from the Governor’s Office and it’s also a great way to build relationships with businesses that I’m recruiting to the state and trying to retain in the state. I use the golf course often, not only in my own recreational enjoyment but also in my business recruitment. The golf course is a very good place for a business meeting.”