Palmetto Dunes Oceanfront Resort on Hilton Head Island boasts a trio of award-winning golf courses designed by celebrated architects. During their time in the Lowcountry, the three used relatively unknown field assistants who have each gone on to gain their own industry renown.

Rulewich was surprised to learn that Jones designed golf courses, not buildings.

Nevertheless, by the late 1960s Rulewich was apprenticing with the Jones Sr., and regularly crossing a sleepy, two-lane bridge onto the still relatively unknown Hilton Head Island, where Rulewich’s mentor was building the first golf course for the Palmetto Dunes Oceanfront Resort.

Opening in 1969, the Robert Trent Jones Course has long remained a sparkling crown jewel at Palmetto Dunes Resort. It continues to be widely recognized as one of the true “Grand Dames of Golf” in the Lowcountry of South Carolina.

As for Rulewich, now 76, he would go on to become lead designer for the ebullient Trent Jones Sr., and become affectionately known to many as “Roger Trent Rulewich” during their 34 years together. By the time Jones passed away in 2000 at age 93, he had forged a legacy as one of history’s most prolific course designers, having designed close to 500 golf courses in at least 40 states and 35 other countries — many with his mild-mannered assistant by his side.

In 2002, when Palmetto Dunes decided to invest millions of dollars renovating its Robert Trent Jones Course, the resort knew exactly to whom it should turn.

The Jones Course, which boasts one of only two oceanfront holes on the island, reopened for play in September 2002. Following Rulewich’s masterful facelift, it was named South Carolina’s 2003 “Golf Course of the Year.”

Steve Forrest has worked with Arthur Hills for more than three decades now, including their 1988 work together at the Palmetto Dunes Oceanfront Resort.

The Arthur Hills Course at Palmetto Dunes would go on to host some of golf’s most legendary names, including Tiger Woods and Phil Mickelson, when it served as the longtime site of the Golf World/Palmetto Dunes Intercollegiate Championship.

Last but not least, most everyone knows that in 1974, when architect George Fazio was designing the second golf course at Palmetto Dunes, he incorporated the services of his young nephew, Tom Fazio — another up-and-comer who would go on to forge an even more legendary career than his uncle.

Yet fewer will realize that also helping George Fazio on construction of his course at Palmetto Dunes — which completed the resort’s hat trick earlier this year when it was named 2014 “South Carolina Course of the Year” — was a fellow PGA Tour professional named Bob Spence, who later worked as one of the first directors of golf at Palmetto Dunes Oceanfront Resort. 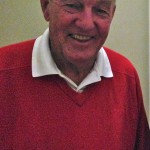 Spence would later become a nationally-recognized golf instructor, a lifetime member of the PGA of America, with a resume that includes a five-year tenure with Golf Digest Instruction Schools. A longtime friend of Davis Love Jr., for more than a decade, Spence has been considered a true expert in golf course design and construction — involved in the consulting and remodeling more than 30 courses.

“You look at a piece of ground, and you know instinctively what makes a great hole,” said Trent Jones Sr., when he was working on his golf course for Palmetto Dunes Oceanfront Resort. “There is a flow and rhythm that you can feel. You think how to stake it out, then use logic to make the right choice.”

Considering that all three Palmetto Dunes Oceanfront Resort courses now have been nominated as the national “Golf Course of the Year” — apparently, the trio of famed architects followed the same criteria when selecting their “right-hand men.”