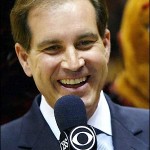 GREENSBORO, N.C. — It is no coincidence that  “the voice of sports” belongs to one of the most thoughtful and introspective interview subjects imaginable; and that same person also happens to be among the most affable and cordial people you’ll ever meet.

So I suppose it should come as no surprise that Jim Nantz returned a phone call bright and early Monday morning from his Connecticut home while preparing to  “tip off,” as the case may be, what Nantz describes as his most grueling week of the year.

Therein lies the thing about Nantz. He’s silky smooth, yet genuine and down-to-earth. He has become a hugely popular celebrity, yet still looks a person in the eye and listens attentively when not speaking.

The previous weekend served as what Nantz calls a  “nice little appetizer” prior to the most maniacal madness of his March itinerary. He broadcast a total of three Big Ten conference tournament games from Indianapolis on Saturday and Sunday, then hosted the CBS Selection Sunday show and afterward stayed up until well past 2 in the morning preparing his homework for the upcoming week.

“People don’t understand when you call these games you have what you call a ‘spotting board’  — a glorified cheat sheet in front of you — so that you really have at your fingertips all the important anecdotal information,” said Nantz. “ So we had a very productive night [Sunday] night.”

Monday morning, Nantz was at home returning phone calls at the same time he was packing for the two-hour drive to Dayton, Ohio, where he would cover four hours of practice later that day, then broadcast the two NCAA play-in games from Dayton on Tuesday night.

On Wednesday, Nantz headed to Greensboro, N.C., where he attended eight hours of Thursday practices at the Greensboro Coliseum while at the same time preparing boards and doing research, talking to players, coaches, radio play-by-play announcers and student-managers. He will be back on the air Friday from 1 p.m., until well past 12 midnight calling four games.

On Saturday he does it all again, attending four more practice sessions. On Sunday, he will call two more games.

For those of you scoring at home, that’s 11 games Nantz will have broadcast in one week.

“People think, ‘Well, that’s cool. You get to go to 11 basketball games,’ “ Nantz said. “ They have no idea how much time you spend. And by the way, I’m not looking for any violin music here or any sympathy cards, but there is a lot of preparation behind it that keeps you up working late at night.

“Like [Sunday], after being on the air all day, I was up until past 2 o’clock this morning and I will again [Monday night]. To make sure I understand who these teams are, who these kids are. And then I do justice to their story: This story that deserves a chance to be told to a national audience. What they did to qualify for the NCAA tournament. Whether they were the 16th seed or the No. 1 seed, they deserve equal time and attention by the guy who is going to be documenting it for the rest of the world. So I feel tremendous responsibility during the first week of the tournament.

“That’s the one that really knocks the wind out of your sails. There’s a lot there to try to speed read through and make sure that you have it completely down cold. It’s fast and furious. It’s a lot of behind-the-scenes prep work. The games are the fun part. The preparation isn’t so bad, but it’s very intense.”

Though the national spotlight intensifies during the next few weeks, Nantz admitted his job becomes much easier after Week 1. “This is the week you’ve got to get through,” he said. “The next two weeks, the regionals and the Final Four, there are only three games to call and you’ve had all week to prepare for them, and you know who the teams are going to be. It’s a lot simpler.”

When Nantz finally gets to unwind by broadcasting  “a tradition unlike any other” — the Masters on CBS — he will have broadcast 17 basketball games in 23 days. “Now, that’s what knocks you on your backside,” he said. “It’s not really for me so much the transition from the Final Four to the Masters — those two, super, primo events. It’s the first week of the NCAA tournament that is the one that is hard to recover from.

“This month of March, the March Madness thing, the Madness is the first week of it.”