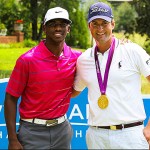 GREENSBORO, N.C. — The last time Chris Paul and Webb Simpson were together on the same golf course was early May 2011 during the final round of the Zurich Classic in New Orleans, when Paul had inside-the-ropes access for Simpson’s infamously bad break that eventually cost him a shot at his first PGA Tour victory.

On Wednesday at Sedgefield Country Club, two of Wake Forest’s most famous alumni reunited on the golf course, only this time with a totally different story line. Indeed, just 15 months following their last gut-wrenching get-together in New Orleans, Simpson arrived in Greensboro as not only the defending Wyndham Championship winner, but also reigning United States Open Champion.

Paul, meanwhile, was at Sedgefield playing in the Wednesday Pro-Am in a group with two-time Wyndham champion and 2012 Ryder Cup captain Davis Love III — along with Australian professional golfer and model Anna Rawson — and the Los Angeles Clippers star point guard proudly displayed his second Olympic gold medal, this one earned just days earlier during the American men’s basketball victory at the London Games.

“I really haven’t had an opportunity to reflect on [the gold medal] because once I got home and spent time here at home yesterday and even today, I almost forget that I was just in London two days ago,” Paul said. “It was such a blur and I don’t remember too much right now.  It’s just all so crazy when you’re on a whirlwind like this.”

The two former Demon Deacons were good friends in college and have remained close ever since. “[Webb] was actually roommates with one of my really good friends, Cameron Stanley, and I knew his wife, Dowd, also really well,” said Paul. “We text, you know, often and different things like that and I’m just happy to see Webb playing great because he’s one of the guys that absolutely deserves it.”

Today, their lives have started to parallel one another both on and away from the playing field. Paul’s wife, Jada Crawley, is expecting the couple’s second child this week, while Dowd Simpson gave birth to their second child and first daughter, Willow Grace, in late July.

Paul is a big golf fan, too. He took up the game at Wake Forest — egged on by another former Deacon and Wyndham participant, Bill Haas — and during the Olympics, Paul and his brother, C.J., watched the PGA Championship daily on Slingbox.

Paul said he was particularly excited to be playing with the 2012 U.S. Ryder Cup captain on Wednesday. “I’ve had an opportunity to play a lot of basketball all over the world,” he said, “but when I found out I got paired with Davis [Love III], I was like a little kid, excited.”

As for Paul’s Wake Forest brethren, Simpson is preparing to begin his inaugural defense of a PGA Tour victory right in his own backyard, and said his experiences since he last saw Paul have been somewhat surreal.

“And [I have] never defended before, obviously, so I’m excited for that challenge and we got a great field this week and I know all the sponsors and [Mark] Brazil, everybody is excited for the week and hopefully I can play well.”