GREENSBORO, N.C. (August 18, 2011) — Olafur Loftsson, a rising senior at UNC-Charlotte, became the first golfer from Iceland to compete in a PGA TOUR event this morning during the Wyndham Championship at Greensboro’s venerable Sedgefield Country Club.

Battling a bit of shaky nerves at the start of his 8:50 tee time Thursday morning, Loftsson double-bogeyed his first hole of the day, Sedgefield’s par-4 10th, but played the remaining 17 holes in 4 under par to finish the day with a 2-under 68.

Loftsson is playing the Wyndham on a McConnell Golf sponsor’s exemption as the winner of last weekend’s Cardinal Amateur at Greensboro’s Cardinal Country Club. Both Sedgefield CC and The Cardinal are owned by Raleigh-based McConnell Golf. The Cardinal Amateur is not only one of the most coveted amateur events in the country — with a storied history of matching some of the world’s top players in a competitive but fun environment — but also has been a leader in community charity dating back to 1983, when its first educational scholarship was announced.

“I was lucky enough to get an invitation to [The Cardinal Amateur],” said Loftsson. “The field was pretty strong, in my opinion, it was a lot of great amateur guys out there, and the course, magnificent course.”

Loftsson said golf is the second-most popular sport in Iceland behind soccer — yet until this week he had never attended a PGA TOUR or European Tour event. There are about 70 golf courses in his country, mostly links style, but the golf season lasts no more than five months per year. “It’s a good feeling being the first Icelandic player ever to be here,” said Loftsson. “Not only for me, just as well for my country.  It’s a good feeling representing your country. It means a lot to me.”

A Icelandic television crew and other media have made their way to Greensboro to document Loftsson’s endeavor. “You can recognize them by their skin color,” he said with a chuckle.

“We play about four to five months a year because of weather conditions and it’s … growing very fast,” said Loftsson.  “A lot of the population now plays golf. It’s very popular for youngsters now and we’re seeing a lot of potential players rising in these days.

“You can’t play golf all year around in Iceland,” Loftsson added. “To play on European or PGA TOUR you have to practice all year-round.”

Loftsson first went to Division III Oglethrope, where he won an individual national championship as a freshman, and then transferred to Charlotte, where he’s a two-time All-Atlantic 10 performer. “Basically the best opportunity for me was to go to college here in the States,” he said, “so I found myself a school here in Division III to start with and worked my way up and am now at UNC-Charlotte in Division I and having a great time over there, and it’s probably the best opportunity to get better is to go through college here in the States where you can both educate yourself and play some golf and it’s been a lot of fun so far. I’m very excited about the future.”

Loftsson said there has been quite a reaction in Iceland to his entrance in the tournament. “People over there are very pleased to see me have some success,” he said. “It was kind of sudden, obviously getting a sponsor’s exemption through that win last week but, you know, as I said earlier, it’s the second most popular sport in Iceland and people are all over it and very excited to be able to represent Iceland here and kind of show the world that we do play golf in Iceland and we can be pretty darn good.”

Loftsson said he is not intimidated by his surroundings this week — enjoying a practice round with David Duval yesterday — and has high expectations for his performance at the Wyndham Championship.

“I enter every tournament to win so even though I’m playing the PGA TOUR event now I always play to win,” Loftsson said. “Obviously it’s a lot of fun spending time with the guys you’ve looked up to for all these years and it’s obviously a little bit weird standing around these guys on the driving range and on the putting green. Basically everybody I’ve met, they’ve been super nice and helped me out and I’m just very excited about playing with these guys for the next few rounds.

“I’m going to enjoy these few days and enjoy this experience and try to learn as much as I can because I intend to be here in the future.” 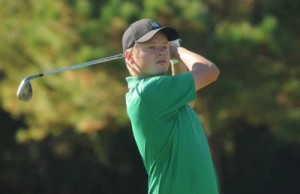